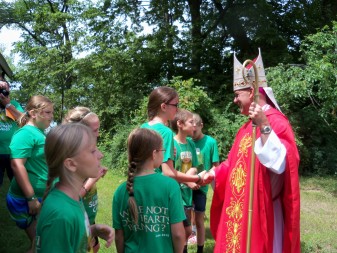 Bishop Kevin C. Rhoades greeted the youngsters after Mass celebrated in the stone chapel at Camp Alexander Mack in Milford on Friday, July 25. Children in fourth through sixth grades camped from July 20-25.

MILFORD — Young people in grades 4-6 and representing 23 parishes across the Diocese of Fort Wayne-South Bend connected with each other, nature and the Lord when they attended Catholic Youth Summer Camp, held this year at Camp Alexander Mack in Milford on the shores of Lake Waubee, July 20-25.

The theme for the camp was “Were Not Our Hearts Burning?” based on Luke 24:32. Dave and Jan Torma, the camp directors, reported 55 campers and 15 all-volunteer staff participated in the fourth annual weeklong camp.

“It’s been a wonderful blessing,” Jan said. “The children get a typical camp experience with activities like canoeing, archery, campfires and crafts, and we also integrate our Catholic faith within the camp experience.”

Campers attended daily Mass before lunch, celebrated by priests that included Fathers Bob Lengerich, Daryl Rybicki, Daniel Scheidt and Terry Coonan. Campers raised the flag each morning to honor their country, learned about the saint of the day, memorized Scripture, and ended each night with a campfire. 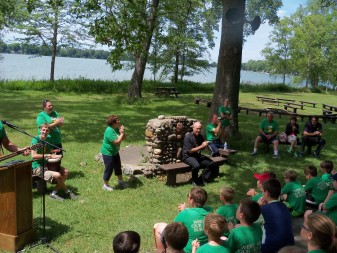 Torma said the campers had the opportunity to sand and decorate Ashiko drums that they played to one of their theme songs, “This Beating Heart” and performed for Bishop Kevin C. Rhoades when he celebrated Mass on Friday, the last day of camp.

Bishop Rhoades thanked the campers for inviting him and told them he’d been looking forward to visiting them.

“To have a camp where you can also pray, have a lot of fun, but also deepen your faith is a beautiful thing,” Bishop Rhoades said.

He commented on how beautiful it was to look out at the lake while celebrating Mass in a stone chapel. He told the children that it was the feast day of St. James the Apostle and any apostle’s feast day is always special to him because “a bishop is a successor to the apostles, called to lead the Church.”

He asked the children if they’d gone fishing while at camp and reminded them that St. James and his brother John were fishermen. The bishop spoke of how the apostles followed Jesus and reminded the youth that being a follower of Christ is not about power, but about service. 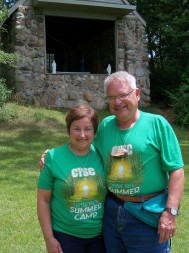 Jan and Dave Torma have been the directors for the Catholic Youth Summer Camp for the past four years. They both speak of what a blessing the camp is for them as well as for the campers. In the background is the outdoor stone chapel where the campers celebrated daily Mass. The camp was held at Camp Alexander Mack in Milford this year but has been held in two other locations as well.

“If we want to be great, we should be humble like Jesus,” he said. “I’m sure this week at camp you learned a lot about what it means to be a follower of Jesus, to serve Him and each other. …”

“All of you are to be friends of Jesus; to be by His side, to talk to Him. How privileged we are to receive His Body and Blood,” Bishop Rhoades said. “The teaching of the Apostles has gone out to all the world. Our job also is to help spread the Gospel with the help of the Holy Spirit.”

At the conclusion of Mass prayer cards were passed out and the bishop invited the children to pray with him a prayer to Mary, Untier of Knots, one of Pope Francis’ favorite devotions. The obstacle course Dave Torma developed for the campers involved untying a knot at one of the stations. The bishop was invited to a picnic lunch by the lake with the campers and to hear them perform a couple of songs.

Campers were excited to share their favorite experiences from the week at camp. Olivia Warden, first time camper from St. John the Baptist in New Haven said she liked “everything.”

“Meeting new friends — all the fun activities,” she said. Warden would definitely recommend attending the camp to others who, like her, have not gone before.

Several of the campers mentioned doing the Emmaus Walk as a favorite, including Elizabeth Stureman from St. Vincent de Paul Parish in Fort Wayne.

Colin Stahl from St. Pius X Parish in Granger said campers were challenged to track seven miles with their counselors walking the Emmaus Walk and back and he tracked 15 miles. “We also went fishing two times — that was really fun.”

Dave Torma explained that the Emmaus Walk was a one mile walk along a wooded path to a natural “cross” tree in the woods and back to the starting point. Scripture said it was seven miles from Jerusalem to Emmaus, so he challenged the campers to walk the seven miles, and 98 percent of the campers met that challenge.

“Four Sisters (of St. Francis of Perpetual Adoration) came and talked to us about their stories,” said McKenna Kleinrichert from St. Elizabeth Ann Seton Parish in Fort Wayne. “That was neat — and we got journals to write in and bracelet rosaries.”

The sisters who visited — Sister Lissetta, Sister Mary Grace, Sister Maria Kolbe and Sister Lucia — not only shared their vocation stories, but stayed to play knockout basketball, eat dinner and enjoy the campfire. Later, they led the girls in night prayer.

The camp facilities were shared with a deaf camp that week and one of their counselors taught them a sign language blessing that they shared with Bishop Rhoades before their picnic lunch. He in turn taught them the blessing over food in Spanish.

The adults were having as much fun as the kids. Mary Ann Sobieralski, known as “Grandma S,” parishioner at St. Jude, South Bend, has volunteered all four years and said she has a passion for children. “I get more blessings than the children do,” she said, “and for those kids who’ve come each year, I watch them grow not only physically but also spiritually.”