The youth participating in this year’s Catholic Heart work camp in the Mishawaka area were not deterred by the heat and humidity as they lived out their Christian faith in service.

Catholic Heart work camps, which are mission trips around the country for young adults, started in 1993 in Orlando, Fla., with 100 participants. They have grown to over 14,000 participants each year, according to the program’s website.

This year more than 280 participants from six states came to the Mishawaka camp, which performed services at sites all over St. Joseph and Elkhart counties. They came from Ohio, Illinois, Iowa, Wisconsin and Pennsylvania, and were joined by youth from St. John the Evangelist in Goshen to serve eight different service organizations in the area. 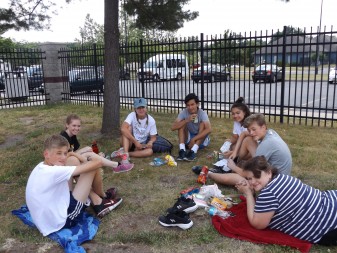 Kathy Turco of St. John the Evangelist said there has been a local Catholic Heart camp since 1994, and she’s been manager since 1998. As camp manager she takes care of the local arrangements with schools for housing the students, and contacts organizations to set up the work.

Recipients of the campers’ service work included Real Services of Elkhart and St. Joseph counties, Center for the Homeless in South Bend, Northern Indiana Food Bank, YWCA Women’s Shelter in South Bend and Elkhart, Faith Mission of Elkhart, Church Community Services, Habitat of Elkhart County and the Boys and Girls Club locations in Goshen and Middlebury. Turco said the volunteers are split up into groups of six kids and one adult.

Four groups of teens worked at Faith Mission. One group, led by adult volunteer Ann Kunst, stained steps and decks and painted picnic tables of residents’ apartments. Despite the 90-degree temperatures and 80 percent humidity, the teens were happy and smiling.

First time attendee Rafael Garcia-Rodriguez of Dayton, Ohio, said he was “here to serve the community and do what God asks.” He said he was “hoping to make the world a better place, one step at a time.” 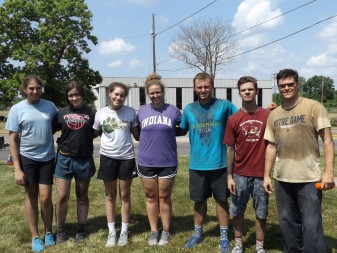 This group was the dirtiest of all the groups working at Faith Mission of Elkhart during Catholic Heart work camp. They were working on an apartment that had fire damage. From left are Katie Wahl, Maggie Ward, Savannah Steinkamp, Anna Widmer, Alex Sheriff, Grantland Hawkins and adult volunteer Andrew Knowles.

Victoria Corado of Hershey, Pa., and Christine Wolf of Freedom, Wis., have both participated in prior years at camps in North Carolina, Massachusetts, Illinois and Montana. Christine said it does not matter to her where the camp is held; she likes meeting everyone, and her relationship with God has become better because of it. Victoria said she likes “doing what God called me to” and “how it feels helping others.”

Chi Chi Chukwunia of Solon, Ohio, and Ryan Finger of Clinton Valley, Wis., were also first-timers, but Ryan’s older brothers have come before and encouraged him to attend. When asked if it lived up to the hype, Ryan smiled and nodded.

Lydia Gould from Hershey, Pa., said it was her fourth time at the work camp, but her first in Indiana. She said she came with her youth group and liked the service opportunity. According to Gould, participating was “like a spiritual journey in some ways” and growing closer to God makes you want to give back. She said she tells first-timers at the beginning of the week that you think you want to go home and sleep in your bed instead of on a school floor, “but on the last day you don’t want to leave.”

Caryn Radcliffe of Twinsburg, Ohio, has also attended before and said that last year, her group worked at a person’s home; she cooked for them and sent letters. Both girls said they keep in touch with some past teens and residents they have met at Catholic Heart work camp, through social media.

When asked if they felt Catholic Heart work camp was a form of evangelization, the teens said they did. The week of service and worship helps bring them closer to the Lord, they said, and the service they provide for others is a sign of Christ’s love.

Laura Leonard said that not only does their service show an example of how to live as Catholic Christians, but it also shows a good example of teenagers.

“Look how great these teens are — they’re Christian, Catholic, faithful teens giving up their summer for others. It’s impressive,” she said.

After the work day the teens unwind, hang out and take lots of naps. In the evening they sing, dance and then transition to more serious matters, like faith sharing. On this retreat they had adoration on Tuesday night, reconciliation on Wednesday night, and residents came to thank the teens and say goodbye on Thursday.

“It means a whole lot that they give up their time and energy to help others out,” Faith Mission receptionist Anthony Mast said. “We just appreciate them coming.”

Mike Perez, resource and development director, said Catholic Heart work camp kids have been coming as long as he’s been there, which is 13 years.

Faith Mission see a lot of volunteers, but the Catholic Heart work camp kids are different.

“The kids in the group are really good, focused and hard-working. Sometimes we have to slow them down,” he said, laughing. “Everyone is really willing to do whatever we ask, which is nice.

He received feedback from Faith Mission that residents were “surprised that people their age were willing to give up their time in the summer to help them. It shows people do care about them and that’s a big deal.

“It’s been a very positive experience for us — a real blessing to have them,” he said.

By all accounts, these teens are rooted in Christ’s love and want to stay that way. First time attendee Nicole Sletter of Cincinnati said, “The work is hard, but it’s fun when you have a group to do it with.”