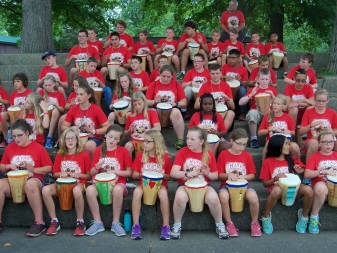 Campers at Catholic Youth Summer Camp 2015 perform with their drums that they each decorated. Camp Director Dave Torma from St. Jude, South Bend, is shown at the top. The theme for this year’s camp was “Mercy Matters.” The camp was held July 16-31 at Camp Mack, Milford.

MILFORD — For a group of fourth, fifth and sixth graders in the Diocese of Fort Wayne-South Bend, a week at summer camp included not only the usual canoeing, campfires and cabin bunking but also daily Mass, Scripture study and praise and worship music.

The Fifth Annual Catholic Youth Summer Camp was held July 26-31 at Camp Mack in Milford. This year’s theme was “Mercy Matters” based on Luke 6:36: “Be merciful as your Father is merciful.”

Twenty-one parishes were represented at the camp among the 44 campers —14 of whom were returning campers. Twenty volunteer staff made the camp possible. CYSC is sponsored by three parishes — St. Vincent de Paul in Fort Wayne, St. Jude in South Bend and Sacred Heart in Lakeville.

Dave and Jan Torma, camp directors, said the camp is the culmination of many years of work. “But it was all in God’s time,” Jan said.

This year each group’s campsite was named for a place where saints who are associated with mercy once lived “just like the Israelites,” Jan said. Each campsite flew a flag depicting the city and the saints that included places like Krakow, Fatima, Calcutta and Auriesville, New York.  Each day Mass was celebrated by a different priest who came to the camp.

Msgr. Michael Heintz, rector of St. Matthew Cathedral, South Bend, celebrated Mass on the feast of St. Martha. During the homily he told the campers that Jesus reminded Martha she was “putting the Lord’s work before the work of the Lord — that can happen to any of us,” he said.

He encouraged the campers that even when they are doing something to serve the Lord, “Always ask yourself, ‘why am I doing this?’ Hopefully your answer will always be for Jesus.”

Before Msgr. Heintz left, the campers played a song (“And all the people said Amen” by Matt Maher) on the drums for him. He said it was “very impressive — they did great!”

During the course of the week the campers were learning about the corporal and spiritual works of mercy, and Dave Torma set up an obstacle course based on the theme. He explained that originally the obstacle course was created to act as filler between activities but it’s evolved to be a daily activity centered around the camp’s theme.

“The kids have to discover the work of mercy each represents,” Dave said. “We don’t tell them, they have to figure it out.”

Awards were presented to the girl and boy who completed the course the fastest each day and were announced at the campfire.

Campers shared that they were enjoying the spiritual aspect of their camp experience but also enjoying regular camp activities. One fun activity the sixth-grade girls were engaged in was called “Flying Squirrels.” Someone is put in a harness and a team pulls a rope to lift the person up to the trees. Campers, egged on by Camp Mack’s program director Curt Rowland, left their counselors up in the air a little bit longer.

The fifth-grade girls in Campsite Calcutta shared some of their favorite parts of camp. Maggie Nguyen, whose mom was actually an orphan in one of Mother Teresa’s orphanages in Calcutta shared that she liked the “counselors, friends and all the activities.”

Hannah Matthews enjoyed “swimming and the chance to go to church every day and do readings.”

Sydney Kaiser mentioned the aqua glide and the camp choirs and the girls shared a few of their favorite camp songs.

Some of the sixth-grade boys also shared what they enjoyed most. Erik Nunez said, “The gaga bowl, the aqua slide and oh yeah, archery, too!”

Jan Torma said that all the fish caught that week by the campers was saved and filleted for a fish fry at the end of the week.

Every day cabins were inspected for cleanliness and also a spiritual theme and an award was given each night to the best-kept cabin. A visit to the sixth-grade boys’ cabin showed towels hung straight to dry, not a speck of dirt to be found, suitcases arranged in the form of a cross with rosaries and journals on top and CYSC 2015 spelled out with camp T-shirt. “We teach a lot of life skills here, too,” Jan said.

The Tormas praised their volunteer staff and expressed appreciation to all who support and donate to make the camp possible. Even though there is a fee for the campers to attend, it doesn’t cover all of the costs. Many of the staff voluntarily offer a week of their vacation to be at the camp.

“The counselors make the camp,” Dave said. “We can put together a good program, but it’s the counselors and their connection to the kids who make it work.”

MILFORD — The spirit of Blessed Mother Teresa was very evident at Catholic Youth Summer Camp this summer with several providential happenings. First, the choice of Calcutta as one of the campsites, then camper Maggie Nguyen who gravitated right towards that group without knowing where she was assigned. Her response was, “My mother’s from Calcutta so I have to be here.”

Maggie’s mother was actually an orphan in one of the orphanages run by Mother Teresa and she happened to stop by camp to drop something off. Camp Director Jan Torma asked if she would speak to the campers while she was there. Lalita Nguyen said she knew Mother Teresa from the time she was five years old and said she was a gentle woman.

“All of us kids helped each other. We grew up together. We took care of the babies,” she said, adding that Mother Teresa taught them to value going to church no matter how difficult.

“She was so gentle. She always taught us never to leave anyone behind because they are different. She always said, ‘please, thank you and I love you.’”

“Mother Teresa helped us to get things from the garden,” she told the campers. “In the orphanage she taught us to value everything we have right here so when we leave the country we’ll be grateful and always be blessed.”

“Everywhere I go, I see her,” Nguyen said. “She was a great joy and she was so good to us.”