For years, parents take care of their children, ensuring they are healthy and cared for, all their needs met. Age, however, turns the tables and parents are left in the care of their children. This was true for the family of Esther Hinen, who found her final home at Saint Anne Communities Victory Noll in Huntington, passing away last year at 93. Two of her eight children, Ed Hinen and Mary Bowman, and Ed’s wife Lori raved about the care Esther found at Saint Anne.

Esther had previously been at another nursing home, but she wanted more than anything to end her days at Saint Anne Communities. She first went into senior care not because of a great need, but because of loneliness, Mary said. It was a comfort to her family that Esther made friends at her home, yet they knew she still craved the Catholic environment that a place like Saint Anne could provide. Then she developed MRSA, a staph infection that sometimes spreads at places such as nursing homes. After going to a rehabilitation center for a time, her children decided she would not return to that home, but move into Saint Anne Communities instead. 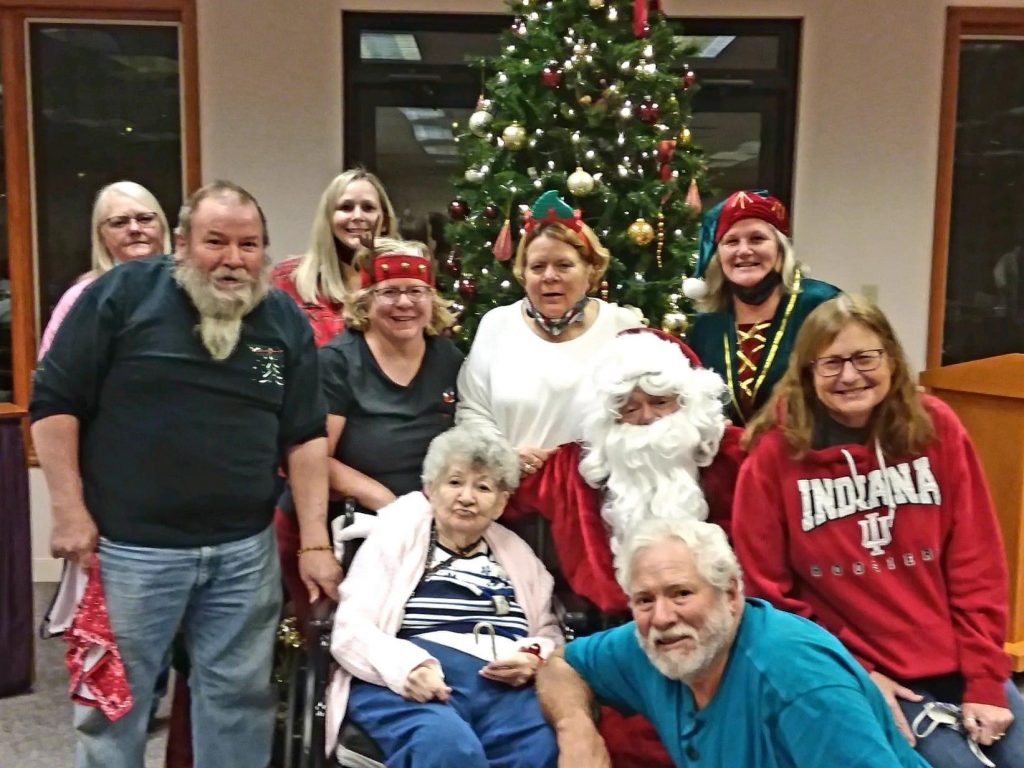 Provided by Mary Bowman
The Hinen family is extremely grateful for the love and care their mother, Esther, front row in wheelchair, received while a resident of Saint Anne Communities Victory Noll in Huntington. Esther passed away last year, but her daughter Mary Bowman still volunteers at the retirement home.

With her dream finally realized, the level of care she received exceeded what she had previously known, Ed and Mary agreed. Mary said that at Saint Anne Communities, “you can feel the love. That’s why I like it a lot. There is so much there.”

Initially, Esther’s family thought that she could not afford Saint Anne. Then Mary, who helped Esther manage her money, found out from one of the workers at Saint Anne Communities that with her VA benefits and savings, they could indeed afford to send her there. “It was well worth it,” Ed said.

Lori believes that even if Esther’s children would have had to pitch in to keep her at Saint Anne Community, they would have done so without complaint to keep her happy and well cared-for. After Esther’s passing, Lori and Ed agreed that bringing her to Saint Anne Communities was the best thing her children could have done for her. “Because you could just feel the love that every person had for her,” Lori said.

Esther spent the last two years of her life on the Victory Noll grounds, participating in daily Mass and praying the rosary, particularly with other residents. She played cards, walked the beautiful campus grounds and enjoyed the courtyard area, where residents are allowed to plant flowers that they can see through their bedroom windows. Even with the COVID-19 pandemic, staff worked hard to ensure that the virus that had run rampant in some other nursing homes remained at bay at Saint Anne.

Ed and Mary both agreed that it was the care and the staff that set Saint Anne apart from other nursing facilities that they had encountered. Some of the staff members from Esther’s previous home even transferred over to Saint Anne, which made her transition that much easier. Though the pandemic cut off most socializations for a time, staff members ensured that “social butterfly” Esther could make her daily phone calls to her children. Mary spoke of how her mother “adopted” some members of the staff, and how they cried at her passing. To Esther and the Hinens, Saint Anne was a family.

Saint Anne’s homelike atmosphere includes one other unique feature, one not found at most nursing homes, even the Saint Anne residence in Fort Wayne – several retired Our Lady of Victory Missionary Sisters now reside there. Mary spoke fondly of the love and respect given to her mother by the sisters, and which is reciprocated by Esther’s children. Mary, Ed and Lori have gotten to know and adore many of the sisters from the visits they paid to Esther.

It was only when Esther’s condition worsened last July and her health began to deteriorate that Ed and Lori fully realized how much the sisters cared about her.

Mary told a story that illustrated the concern and love the sisters had for her mother. “Every day when mom was sick, they would come in, one by one – one of them was the leader, she’d make them stay at the door – and they’d come in and pray on her every day. Every day. And they just did that round the clock, I mean the whole time.”

Even though their mother is gone, Mary – and Ed occasionally – still host what they call “Hinen Bingo” for the community’s residents, particularly the sisters. Mary brings flowers to brighten their day and donates fun prizes like candy, lotion and seasonal items, amazed by the small things the residents appreciate.

She has continued to give of herself to the residents of Saint Anne Communities, partly to honor her mother’s wishes and partly because of the feeling it gives her. “It is pure joy for me.”

“I’m always going to volunteer. Always, no matter what.”

Those interested in independent or assisted living at Saint Anne Communities Victory Noll can call (260) 484-5555 or email [email protected].