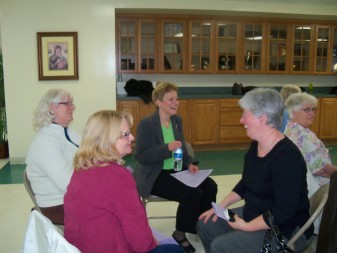 A group of women from St. John the Evangelist in Goshen share in a small group breakout discussion on the Scripture reading from John 11: 1-45 and the reflection questions. Clockwise from left are Rebecca Royal, Tena Jakubowicz, Darlene Leitz and Alice Wheeler.

Darlene Leitz, director of religious education at St. John the Evangelist, and Claudia Diaz of Our Lady of Hungary in South Bend, spoke in English and Spanish on the topic of “Leaving the Tomb.” Both speakers mentioned the importance of action and the power of encouragement.

Leitz told the English speaking audience that whatever the tomb represents in their lives — deadend jobs, family issues, gossiping problems — once they leave it behind, “don’t look in the rear-view mirror.Move forward to a new normal.”

She said there are multiple ways to encourage someone such as praying for them, comforting them, spending time with them, sharing a meal and offering encouraging words. She gave an example of the power of encouragement by sharing the story of Iribar Hernandez, a fifth-grade student at St. Anthony in Harlingen, Texas. Hernandez was a quiet boy who didn’t participate much in class e day his teacher, Sister Catherine, was teaching the class about Divine Mercy and asked the students to describe what she had talked to them about either in words or pictures. Iribar drew a beautiful depiction of Jesus’ Divine Mercy in black and white. Everyone was awed by his talent and the picture was auctioned off. Lietz’s son Matthew received the picture as a gift.

Leitz said, “This child bloomed after he drew that picture — proof of what encouragement does!”

The women at the reflection were then encouraged to break off into small groups to reflect and discuss the Scripture John 11: 1-45 — the story of Lazarus and Martha and Mary. Afterwards both groups of women joined together in the church for Adoration.

Some of the women shared what they thought of the evening. Cathy McGonigal of St. Martin de Porres in Syracuse said she enjoyed the presentation and felt the speaker gave thought-provoking but concrete ideas. McGonigal also benefitted the small group discussions. Although she said she preferred the large diocesan retreats with speakers like Scott Hahn, she noted, “There’s a lot of value in smaller event. There’s not a lot of contact with our neighboring parishes so this gives us that opportunity.”

Irene Hernandez and Guillermina Ortega of St. John the Evangelist attended the Spanish speaking presentation and both said they appreciated the whole event.

Hernandez said, “It was a good experience — getting to know other people and their thoughts and feelings.”

Ortega said she found meaning in all the prayers. Currently she is involved in a catechism class in Mishawaka and is considering using this workshop as her project for class.

Toni Keller and Leanne Miller — a mother and daughter from St. Dominic in Bremen also enjoyed the evening. It was the first time Miller had been at a diocesan women’s event. She said, “I think it offers the chance to really dig deep into what your struggles might be and how your faith plays a part.” She also enjoyed the small group discussions and the different perspectives that were offered.

Her mother, Toni, had been to several such events and felt this was a different setup. “It gave the opportunity to talk with one another in depth.”

She said she would like to see more prayer and song included. Keller also enjoyed the speaker and said, “I love Eucharistic Adoration.”

Keller said she likes the large events and feels there is room for both. “I’d like to go to something like this every other month and a large one every year. Every once in a while we need a jump start — a kick in the pants — to help us live a more Christian life in this day and age.”

Alicia Redinger of St. John the Evangelist thought Leitz did a great job speaking of encouraging each other in faith — even if they may not be immediately encouraged, a seed is being planted.

Susan Schartzer of St. John’s felt the event was “just right.” She liked the convenience of having the event at her own parish. She appreciated Leitz’s talk, the Lazarus’ reading and small group discussions.

She said having Eucharistic Adoration with women of all ages from different parishes and different ethnicities “was very powerful for me.”

Father Anthony Steinacker, pastor of St. John the Evangelist, thanked the women who planned the event and all the attendees. He said he was honored to host the event on such a special evening as Divine Mercy Sunday and the celebration of two popes elevated to sainthood.

Darlene Leitz, director of religious education at St. John the Evangelist, spoke to the women about moving forward in life and encouraging someone daily at the “Leaving the Tomb” event, a women’s retreat offered at three churches in the diocese on April 27. Leitz shows a depiction of Divine Mercy drawn by a young Texas boy that was given to her son as a gift years ago as an example of the power of encouragement.

Women attending the “Leaving the Tomb” evening of prayer, reflection and Adoration at St. John the Evangelist in Goshen were able to hear the presentation in either English or Spanish. Here a group of Spanish speaking women listen intently to the speaker Claudia Diaz on “Leaving the Tomb.”

A group of women from St. John the Evangelist in Goshen share in a small group breakout discussion on the Scripture reading from John 11: 1-45 and the reflection questions. Clockwise from left are Rebecca Royal, Tena Jakubowicz, Darlene Leitz and Alice Wheeler.

The women attending the “Leaving the Tomb,” an evening of prayer, reflection and Adoration at St. John the Evangelist in Goshen gathered together in the church preparing for Eucharistic Adoration.

Father Anthony Steinacker, pastor of St. John the Evangelist, places the Blessed Sacrament in the monstrance for Eucharistic Adoration for the “Leaving the Tomb” women’s night of prayer, reflection and Adoration. The event was held on Divine Mercy Sunday and the date of the historic canonization of two former popes, whose pictures are shown at the altar.