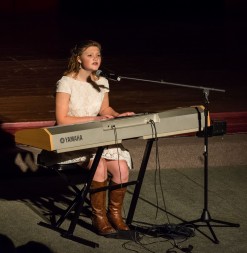 Emma MacDonald sings “Deliver Us,” a song she composed, at the Allen County Right to Life rally and march in January.

FORT WAYNE — Writing music has been child’s play for Emma MacDonald since age 7.

“I was totally rotten when I was little – a brat,” she admits. “I was bouncing off the walls and kept getting put in ‘time outs.’” Finally, after her parents Dave and Jennifer had tried about everything to calm her down, her Dad got her a small, plastic keyboard.

“He taught me to play one song, from ‘Sesame Street’ or something. I kept playing it over and over. Often, I would wander off from a ‘time out’ to go play the piano.” Soon she started making up stuff, Emma related, since she didn’t know how to read music, and singing to what she was playing.

Emma, 16, is the second oldest of five MacDonald children — two girls and three boys ranging in age from 18 to six. Natives of Fort Wayne, Emma’s parents met at a campus ministry Mass at St. Jude Parish. Subsequently, they were married at St. Jude and remain parishioners.

Since the oldest child was in first grade, Jennifer has been homeschooling the children. “It’s been phenomenal,” she said, “and has given us complete unity as a family. Our goal is to prepare them for whatever God has for them without knowing what that might be,” she related. “One son plays recorder, never practices, yet recently received an award. Our oldest daughter loves to write. Another son is building oriented and understands the mechanisms of how things work. … But we’re always looking for the whole person, not just their talent,” Jennifer emphasized. “I often grounded Emma from playing piano so she would do her math,” she added.

As far as any inherited musical talent, the only evidence seems to be that Dave played trumpet in marching band in high school.

When Emma was about 8 she began taking piano lessons to learn to read music. But she was involved in writing her own instrumental songs and didn’t practice the assigned piece. “My teacher was so frustrated she grounded me from playing my music,” Emma said. And since she could play by ear, she didn’t want to do the work of learning to read music. After a year Emma quit lessons but kept on writing her own pieces.

Two years later, Emma resumed piano lessons since, admittedly, she knew only a few chords. She found an instructor from church and they exchanged lessons for babysitting. “It’s been a total blessing,” Emma said. “She’s really helped with my songwriting and I learned to read music rather quickly this time around.”

When asked how a song comes about, she said: “Lots of times I’ll be doing the dishes, singing some song that I know. All of a sudden I’ll get this tune in my head with lyrics,” she explained. “I’ll try to sing it again to make sure it’s legit. I’ll turn off the water and run upstairs to where my piano is and record that one musical phrase. Then I’ll go finish the dishes.” Later, she’ll come back to the piano and add more music and lyrics. Emma estimates she’s written more than 100 songs and many half-written works.

“Actually, I don’t write the music first and then add lyrics,” she continued. “I do both at the same time. Often, when I’m upset … or I have some sort of inspiration … I just sit at the piano and it all comes out.” Emma estimates she averages about a song a day, usually in about 30 minutes.

Emma cited the example of when she went on a mission trip to the jungles of Costa Rica in December 2012. While there she journaled about her surroundings and experiences. “When I got home I was so heartsick for the place that I opened my mission journal and began putting my thoughts to music.” It was the basis for her song titled “Mission.”

Emma has performed her songs at recent events within the diocese including “Deliver Us” at the 2014 Allen County March for Life on Jan. 18 and “Song to St. Joseph” for the 100th Anniversary Mass of St. Joseph Church, Fort Wayne, on May 1. Many of her songs and related information can be found on her website www.emmamac.com. Her current producer, David Smith, of Icon Studio Productions, Fort Wayne, said, “Having worked with Emma, I can say she’s the type of artist … I’d call a true songwriter. She’s the kind of person that, even if there was no money or popularity involved, she would still be writing songs for the love of it. She has that kind of commitment and drive.”

When asked by Today’s Catholic if she plans to pursue a career in music, Emma answered, “Honestly, I don’t know. I enjoy it so much and it’s a very big part of my life. But there are so many other things I enjoy, too. I love mission work. I love cooking. I also desire to be married and have children. I really don’t know what God is going to do with it yet. Maybe a mixture of all of them,” she related.

“When I was in Costa Rica … I sang to our new friends. Despite the fact that many of the songs were in English and they didn’t even know what I was saying, the sweet people of Costa Rica listened. They listened with their ears and with their hearts. More often than not they tried to sing along. It was a most humbling experience that truly opened my eyes to the love God bestows upon each one of us,” she concluded.