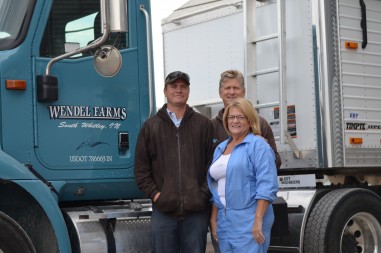 SOUTH WHITLEY—The harvest is almost complete at the Wendel farm the second week of November. The fields are nearly empty, the corn is in the dryer, and the semi is ready to deliver another load of corn.

Dean Wendel, along with his brother Dave, his son Adam and a full-time hired hand, runs a 230-sow, “farrow-to-finish” hog operation in Whitley County. Dean says they sell about 2,500 pigs per year, which they raise from birth (farrowing) until they’re ready for market; the process takes about six months. The family also farms 3,200 acres, growing corn, soybeans and a little wheat, all of which need to be harvested.

Julie and Dean Wendel have five children ranging in age from 25 to 32. Their son John has been in Chicago for the past nine years or so, and Aaron, who studied art, lives in Washington. Jill is in her third year of grad school, earning a degree in audiology from Purdue. Jennifer, a third-grade teacher, lives near Indianapolis with her husband Scott and their 1-year-old daughter, Zoe. Adam, their second-oldest, worked with a sports program for kids in Chicago until three or four years ago, when he moved back to the farm. He now lives in a house just down the road from the one he grew up in. “Every year, I’m starting to appreciate it more,” he says.

During the harvest, the Wendels start before sunrise and may work until 9 or 10 p.m. Adam says he and his dad tend to lose weight at this time of year, because they’re always eating on the run.

“In the beginning it’s kind of overwhelming,” says Adam. But “after the first few days, you start to like it.” 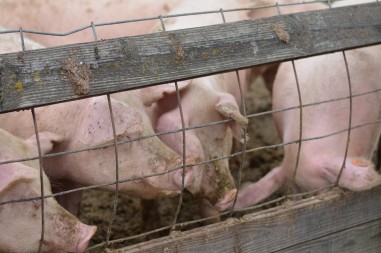 Some of the work is monotonous, but it allows time for reflection. “One of my favorite things to do is chisel plowing,” says Adam. In chisel plowing, he explains, seven shanks dig eight to 10 inches into the ground as the tractor goes back and forth across the field. With the aid of GPS, the tractor practically drives itself. “You can do a lot of thinking out there,” says Adam. “You can talk to God … I’ve found myself saying more Our Fathers, Hail Marys.” And when the sun is coming down, “it kind of all makes it worth it when you have a sunset like that. You think about how lucky you are to be a farmer.”

The corn and beans have yielded well this year, but Adam and Julie recall that 2012 was difficult due to a drought. The corn “took off and just quit growing,” says Adam. “Last year there were some fields that were making 20 bushels per acre or 30.” A good yield, he says, is more than 200 bushels of corn per acre. In tough times, crop insurance helps, but he also asks that people “send up some prayers that it’s a good year.”

In describing their roles on the farm, Adam says that he’s a farmhand, a jack-of-all-trades who does “whatever’s needed the most.” His father Dean “pretty much runs the hog operation,” and his uncle Dave keeps the combine running and handles the mechanics and maintenance. “They’re the head guys.”

“My grandpa — he’s 85 years old. He’s kind of still the boss around here,” Adam adds. Having three generations work together can cause tension at times, Adam says, but they try to keep the peace. “Usually at the end of the day, you let down your guard and you’re okay.”

The Wendels are seeing a good harvest in their faith lives as well. Despite their busy schedules, Dean, Julie and Adam are active members of St. Robert Bellarmine Parish in North Manchester. This fall, they each attended a Cursillo Weekend, listening to talks on piety, study and action. Dean and Julie help lead the RCIA program, and Adam is sponsoring a candidate for the first time. “I am learning so much,” says Adam. “Everyone that is a cradle Catholic should go through an RCIA program.”

Adam also teaches religious education and lectors at Mass. And with encouragement from his pastor, Father Andrew Curry, he’s helped bring a men’s group, Small Parishes Actively Receiving Christ (SPARC), to the parish. He says leading and building the group is harder than he’d thought it would be, but he’s learning something at every meeting.

“A lot of things that inspired me to get involved — it’s seeing other people get involved,” says Adam. “It just made me want to step my game up … now hopefully I can do that for other people.”

Even around the harvest, the Wendels make sure they have fun together. On Monday nights, the men go to the eight-lane bowling alley where all five Wendel kids had “surprise” 16th birthday parties. And every year, the family enjoys a pre-harvest or post-harvest breakfast in town.

Adam is looking forward to the holidays (and the shorter workdays after the harvest), but he says seeing his siblings and the rest of his family is even more fun when it’s spontaneous, like when they tailgate at Purdue. “That’s my favorite time,” says Adam. “When everyone can come back.”