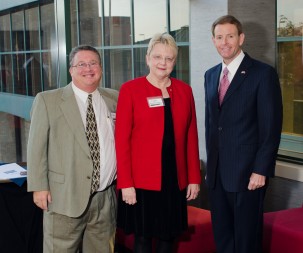 FORT WAYNE — Tony Perkins, keynote speaker for the 14th annual Allen County Banquet for Life held recently at the Grand Wayne Center, sounded a clarion call for the more than 700 audience members to be steadfast, unyielding and uncompromising in the battle for life.

Perkins is president of the Washington, D.C.-based Family Research Council, which was founded by Dr. James Dobson of Focus on the Family in 1980. Perkins is a friend and counselor to senators, congressmen and policy makers and uses his influence to promote the pro-life agenda on the national stage.

“My friends, we know the truth,” he declared. “Every person is made in the image of God. In the words of Mother Teresa, ‘Human life is a gift of immeasurable worth and deserves to be treated with dignity.’”

President Barack Obama insists that the 2012 election will be a contest of values, said Perkins. But the president once said, “If my daughters make a mistake, I don’t want them punished with a baby.”

Since nothing defines a person more than his stance on life, Perkins asked his listeners to consider whose values should lead us into the future.

He closed his remarks to the evening’s audience by saying, “Our heavenly Father is inviting us to join Him, unyielding, uncompromising, as we face the future.”

In an earlier interview, speaker Perkins was effusive in his praise for the “bold … stand for life” being taken in the state of Indiana, especially the attempt to defund Planned Parenthood.

“It’s encouraging to see the leading role they’re taking” in this effort, he said.

Pro-life victories in the 2011 Indiana General Assembly include House Bill 1210, which opts out of the abortion provision of the federal Patient Safety Affordable Care Act, requires hospital admitting privileges for abortionists and removes state funding to any entity that performs abortions. Another piece of legislation, House Bill 1474, tightens reporting requirements on the termination of pregnancy form, making it more difficult to cover up child sexual molestation.

Nationally, Perkins supports the official inquiry by the U.S. Committee on Energy and Commerce into Planned Parenthood’s possible misuse of taxpayer funds to support abortion and their request for evidence that the organization properly reports cases of sexual abuse and sex trafficking. With other questionable government practices just now coming to light, this is certainly “worth looking into,” he asserted.

A highlight of the evening was the announcement of this year’s winner of the coveted Telemachus Award. It is named for a 4th-century monk who was killed protesting the senseless slaughter of gladiators in the Roman Forum and is bestowed annually on a person who contributes in a special way to the pro-life cause.

This year the award went to Dr. Dean Wenthe, former president of Concordia Theological Seminary and long-time proponent of the right to life movement. It was given to him by Bishop John M. D’Arcy, bishop emeritus of the Diocese of Fort Wayne-South Bend, who said he was delighted to honor a dear friend in doing so.

“He has always supported the dignity of every person, especially the unborn,” said Bishop D’Arcy.

Another award, the Daniel Award for Excellence in Pro-Life Public Policy, went to U.S. 6th District Congressman Mike Pence. Named for the Old Testament figure who followed God’s will in his role as the king’s counselor without regard for his personal safety, it recognizes a public official who invests his political influence for the cause of life.

New this year, a live auction of dinners for eight prepared and served by professional chefs and hosted by six Pastors for Life proved to be a crowd-pleaser and successful fundraiser, as the auction netted $14,500 for Allen County Right to Life activities.