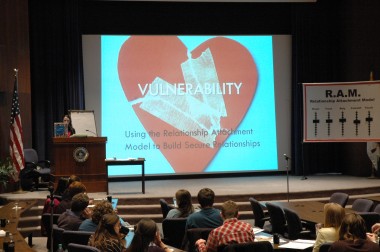 NOTRE DAME — Presenters delved deeply into human strength and weakness as they pertain to a person’s self view, and to how we view others, during the 2012 Edith Stein conference at the University of Notre Dame Feb. 10-11.

The theme of this year’s conference, which is put on by the student club Identity Project of Notre Dame, was, “Encountering Vulnerability: Courage, Hope and Trust in the 21st Century.” According to co-chairman Rebecca Roden, the theme was an application of a C.S. Lewis quote: “To love at all is to be vulnerable.” Roden said organizers hoped the theme would take the conference back to its roots.

“It relates to romantic relationships, it relates to friend relationships and issues that affect women. Who to love, dating violence  — a lot of those topics fall under the theme,” she said.

Keynote speaker Sarah Borden Sharkey, associate professor of philosophy at Wheaton College, opened a discussion about vulnerability and loss by focusing on how Stein dealt with failure in her life. Stein thought that the distinctively human trait of vulnerability is intimately tied to our human calling in the world, Sharkey asserted.

Edith Stein was a Jew born into a powerful but peaceful German state in 1891. Highly educated in philosophy, she was discriminated against in academic circles on the basis of her gender. Stein took action against the systems of injustice, Borden Sharkey noted, but not against the individuals participating in those systems. 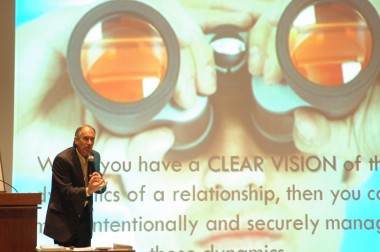 During a series of additional disappointing career developments, Stein converted to Catholicism and acquired a love of monastic life that led her to become a cloistered nun. As a nun, she was given the opportunity to finally display her profound academic skills. But the Nazis refused to allow her opus on the study of Thomas and Husserl to be printed, and she was killed at Auschwitz concentration camp in 1942. She was canonized in 1998 and is known as St. Teresa Benedicta of the Cross.

Margaret Kennedy, co-chairperson of the conference, estimated that 200 attended. Both men and women absorbed presentations by and asked questions of a distinguished lineup of speakers that included Holy Cross Father Wilson Miscamble, Pamela Fitzpatrick of the University of North Carolina, Greensboro, author Erica Bachiochi and others.

One of the well-attended sessions was led by Amelia Ruggaber, a University of Notre Dame alumnus whose presentation used Girard, pop superstar Lady Gaga and Ghandi as examples of the pain humans live with and the solutions for transforming personal vulnerability into a healthy way of perceiving one’s self and others.

Dysfunctional relationships are based on fear and the desire for power, Ruggaber said. Cultural misrepresentations of how men and women should regard and treat each other lead both genders to primarily express themselves physically and to regard dominance of the other as the goal. That thinking naturally leads to sexual violence.

Worst of all, the temptation to do so is very subtle.

“Sexual violence isn’t the disease, but the symptom of a problem” that has its roots in the devil’s temptation, she said.

John Van Epp, the author of “How to Avoid Falling in Love with a Jerk,” also drew a large audience to an explanation of how both men and women become involved in relationships that fall apart. Epp utilized a large visual aid of five thermometer-style scales. Each represented a key bond that occurs, or should occur, in any relationship: knowledge of the other, trust, reliance, commitment and touch, including sexual relations. A “jerk,” for the purpose of discussion, is anyone who demonstrates a pattern of bad behavior.

The problem, he explained, is that in a healthy relationship all five progress at the same level. But, for example, a couple who knows a lot about each other — including enough to not trust him or her, say — is in a relationship that is likely to fail or be fraught with problems. He gave another example of a child who had overwhelming trust in his mother. That trust that was betrayed, and the child’s perceptions had to be brought into line with his knowledge of her in order to lower his vulnerability as an adult.

“It is within the framework of secure and safe relationships … that we grow in character and maturity and find ultimate fulfillment,” Epp said. Vulnerability is minimized when the (five) dynamic bonds are in balance.

“That means you don’t have to have a lobotomy to love like Christ. That makes us vulnerable,” Epps concluded.