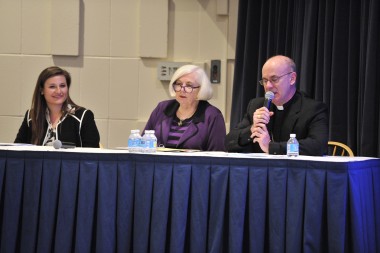 NOTRE DAME — An April 16 evening program at Saint Mary’s College focused on the “Voices of Young Catholic Women” project conducted by college staff and students. That project gathered input from young Catholic women to tell Pope Francis about their love for the Church and their ideas for evangelizing other young women.

Letters, poetry and works of art received from 225 women from several schools and walks of life had been gathered through the project and then presented to Pope Francis at the Vatican last Nov. 26. The papal audience was arranged by Bishop Kevin C. Rhoades of the Diocese of Fort Wayne-South Bend, who accompanied a college contingent consisting of president Carol Ann Mooney, alumna Grace Urankar and senior Kristen Millar.

The April 16 event was a special program to mark the 30th anniversary of the college’s Madeleva Lecture series and featured an impressive roster of guest speakers: Bishop Rhoades; Helen Osman, Secretary of Communications for the United States, Conference of Catholic Bishops; Bethany Meola, assistant director of the U.S. Bishops’ Secretariat of Laity, Marriage, Family Life and Youth; Sister of Charity Patricia Wittberg, a professor of sociology at Indiana University-Purdue University, Indianapolis; and Kristin Colberg, assistant professor of theology at the College of Saint Benedict/Saint John’s University.

The coordinator of the project, Elizabeth Groppe, interim director of Saint Mary’s Center for Spirituality, told the audience of students, sisters, members of the college board of trustees and former presenters in the Madeleva Lectures, that the idea for the project came out of a brainstorming session to develop a significant program to mark the 30th anniversary of the lecture series.

Groppe explained that someone mentioned the recent work of Sister of Charity Patricia Wittberg, a sociologist of religion at Indiana University-Purdue University in Indianapolis. She had published an article in the Feb. 20, 2012, issue of America magazine in which she analyzed data from the annual General Social Survey. She found that, for the first time in recorded history in the Western Church, young Catholic women are less religious and more morally heterodox than their male peers.

“This disaffiliation from the Catholic Church of so many young women is a loss, both to the Church and to those who have departed,” Groppe said, for Sister Patricia predicted the diminished practice of Catholic marriages, lower inclination to baptize and rear children in the faith, and a loss of female personnel to serve in lay ministries, thus impacting parish operations.

Thus, the Center for Spirituality decided to launch a project to reach out to millennial women and gathered student input. The staff discovered a great deal of interest in Pope Francis because of his humility and evangelical joy, Groppe said, so it was decided to invite young women to write the pope and deliver those letters in person.

An audience with the pope seemed “unrealistic, she said, but after a dinner with student leaders, Bishop Rhoades encouraged them to launch the project, and he arranged the papal audience.

In August of 2014 students in Saint Mary’s Campus Ministry invited young women in several other schools as well as non-students to compose a letter, poem or work of art reflecting on four questions: What do we cherish in the Catholic tradition? What it is like to be young women today? Are there broader ways the gifts of women could enrich the Church? If you are a woman who left the Church, why, and what would facilitate your return?

Groppe said that 235 responses were returned, mainly from 13 high schools, colleges and Newman Centers. While it was not a scientific survey, she said, it provides rich insights into the experiences of young Catholic women.

At the Madeleva Lecture program, a panel consisting of Bishop Rhoades, President Mooney and student Kristin Millar, spoke about the experience of the papal audience. Mooney expressed her pride for the work of Saint Mary’s students on the project and expressed the hope that it would offer helpful new insights.

Bishop Rhoades shared how much he had learned from the “fantastic” project, and said he was “moved to joy” by the love for the Lord and the Church expressed by so many women. But he said he was also “moved to sadness” because some of the women related experiences of hurt and suffering due to a culture in which the dignity of women and their worth as persons are not valued.

“It really opened my eyes,” he said, so much so that he has been inspired to address this issue more frequently in his homilies and to be more aware of emphasizing the dignity of every human person. The project also made him more aware of the potential of the women to be “great agents’ in the Church’s mission.

“That came to me very strongly — not only the women speaking of the need for the Church’s outreach to their generation, which I think is so very important — but I also thought how much these women have to give in the life of the Church and the New Evangelization, including with their peers,” he said.