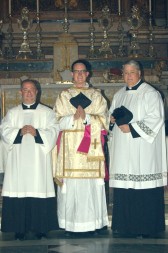 Father Andrew Budzinski, director of the Vocations Office in the Diocese of Fort Wayne-South Bend, left, poses with newly ordained Deacon Royce Gregerson, following the Roman Rite Holy Mass at Church of the Most Holy Trinity of the Pilgrims in Rome on Oct. 3 where Deacon Gregerson delivered his first homily. The Mass was offered in thanksgiving for the Ordination to the Diaconate for Deacon Gregerson on Oct. 2.

TC: Father Andrew, we described you as “off and running” when we introduced you as the new vocation director last July. Tell us about the retreat you held for those interested in the vocation to the Priesthood?

Father Budzinski: The Vocation Office hosted an overnight retreat for young men, 16 and up, who are curious about the Priesthood. Thirty seven men attended. They heard conferences from priests of the Diocese of Fort Wayne-South Bend about Priesthood, discernment, prayer, celibacy and life as a seminarian and priest. They also had the opportunity to meet the seminarians of our diocese and spend significant time with them asking questions about Priesthood and discernment. We also had frequent opportunities for quiet, personal prayer before the Blessed Sacrament in Eucharistic Adoration, Confessions, Mass and a rosary. The men also had a great time socializing, getting to know one another, play ultimate frisbee and other games. Plus, the Knights of Columbus and Serra Clubs provided outstanding, delicious meals.

TC: Did you think the retreat was helpful? Will you hold another retreat? If so, when and where?

Father Budzinski: It most definitely was helpful. The men responded overwhelmingly the desire to have future retreats and will certainly do so every summer. I anticipate the retreat growing to at least a full weekend. I’m in the process of finding a location.

TC: You attended the national gathering for vocation directors recently. What did you learn from that event?

Father Budzinski: The first three days were an institute for brand new vocation directors. There were about 70 new men. We learned some time-tested, good practices such as how to help a man discern if God is calling him to the Priesthood and how to help form the men in the seminary.

TC: Tell us a bit about the “state” of vocations in the Diocese of Fort Wayne-South Bend. How many seminarians do we have? Where are they studying?

Father Budzinski: We currently have 35 seminarians. Fifteen are studying at Mount Saint Mary’s Seminary in Emmitsburg, Maryland. Eighteen are at the Pontifical College Josephinum in Columbus, Ohio. And two are in formation at the Pontifical North American College in Rome.

TC: Pope Francis recently expressed to the Congregation for the Clergy these remarks about those interested in studying for the Priesthood: “Examine closely whether he belongs to the Lord, if that man is healthy, is balanced, if that man is capable of giving life, of evangelizing, if he is capable of forming a family and turning that down in order to follow Jesus.” What do you think of those remarks? What qualities do you look for in a potential seminarian?

TC: If a man is interested in the Priesthood, how should he go about checking into the vocation?

Father Budzinski: First, he should pray. The priest is a man of prayer. God reveals His will for our lives through prayer and the sacramental life of the Church, which of course means he should attend Mass and the sacrament of Penance regularly. Time before the Blessed Sacrament in Eucharistic Adoration is invaluable.

Second, he should do some research. Every young man from our diocese who would like to receive free books about the Priesthood may visit gopriest.com and request them. He’ll get a copy of “To Save a Thousand Souls” by Father Brett Brannen and “Is Jesus Christ Calling You to be a Catholic Priest?” by Father Thomas Richter; fantastic resources that answer so many questions.

Third, he should talk to a priest. If you want to be something, you have to see examples of it. Do not be afraid to ask your parish priest for a meeting to talk about the Priesthood.

Fifth, he may want to consider joining The Melchizedek Project, a discernment group for men, high school and older who meet at least once a month with a priest to talk about different aspects of the life of a priest. We have two Melchizedek Projects in South Bend: at St. Matthew Cathedral and St. Pius X and two in Fort Wayne at St. Vincent de Paul and St. Elizabeth Ann Seton. You can find information at discernpriesthood.com.

Sixth, he should attend a retreat and/or visit a seminary. Retreats, such as our annual “Come and See” retreat or other high school retreats are privileged times of prayer and intimacy with Jesus Christ that allow us to hear His voice more clearly. We will also take buses to the Pontifical College Josephinum every semester so that men can see firsthand what seminary life is like.

Seventh, he should be involved in his parish. Get involved in the youth group and in charitable activities. Assist the priest at liturgies as a server, lector or extraordinary minister of Holy Communion.

Lastly, he should call me, the vocation director — especially if he is a high school junior or senior or older. My job is to help men from our diocese discern a possible vocation to the Priesthood. I would help them in all of the above mentioned ways.

TC: What are some goals you have as the director?

2.) Get the men God is calling to the Priesthood into the seminary.

3.) Help our current seminarians prepare for the Priesthood.

4.) Help our diocesan priests understand how they should call men into the Priesthood. They are the “vocation directors” of their respective parishes.

7.) Increase the number of Hispanic vocations to the diocesan Priesthood.