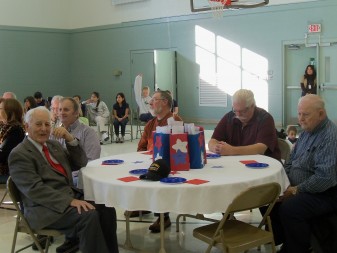 GOSHEN — Veterans from all branches of the military services were honored Friday, Nov. 8, at St. John the Evangelist School in Goshen. The veterans were first recognized and applauded during the 8 a.m. Mass with the student body in attendance and were then invited to the school for a special program in their honor.

Roger Balyak of the Goshen Honor Guard told the students, veterans and others present, “This is one of two or three things we absolutely love to do. I can’t think of any other place I’d like to be except around veterans and church people. You people are special.”

He explained to the students that when a veteran passes and the flag is presented to the family, itß has 13 folds.

“The 13 folds are biblically based — the same religious principles on which this country was formed,” he said.

Fifth-grade students in Paula Gaylor’s class were asked to write an essay about Veteran’s Day. Four were chosen by staff and Principal Mattie Willerton to read their essays.

In her essay, Isabelle Thomas advised, “Let’s all stop for a minute and say a prayer for all of the men and women in the Army, Air Force, Navy, Marines and Coast Guard, and that they return home with their families safely.”

Noemi Vela read that every single person in the U.S. should be proud they have veterans and she hopes one day to have peace in the world.

Cameron Schneider talked about his friend, Adam Mackowiak, who is currently serving. “He chose to do this. I always think about him and wonder what he’s doing. But I know he is keeping us from harm. One day I’ll be proud to wear the uniform.”

Brenton Pham’s essay reminded folks to appreciate what the veterans do. “The least we can do is thank them. They protect all of us. No harm will come to us because of the veterans.”

The Goshen honor guard and many veterans gave the students a standing ovation.

Ruth Newell’s third-grade class read a poem to the veterans. Fourth- and fifth-grade students served coffee, juice and cookies to the veterans and visitors.