He was beatified Dec. 7 with a celebration on the soccer fields of the same school he once served. It continues to educate students from across Guatemala’s western highlands, a mountainous region of Mayan villages rife with outward migration and suffering high rates of poverty and child malnutrition. 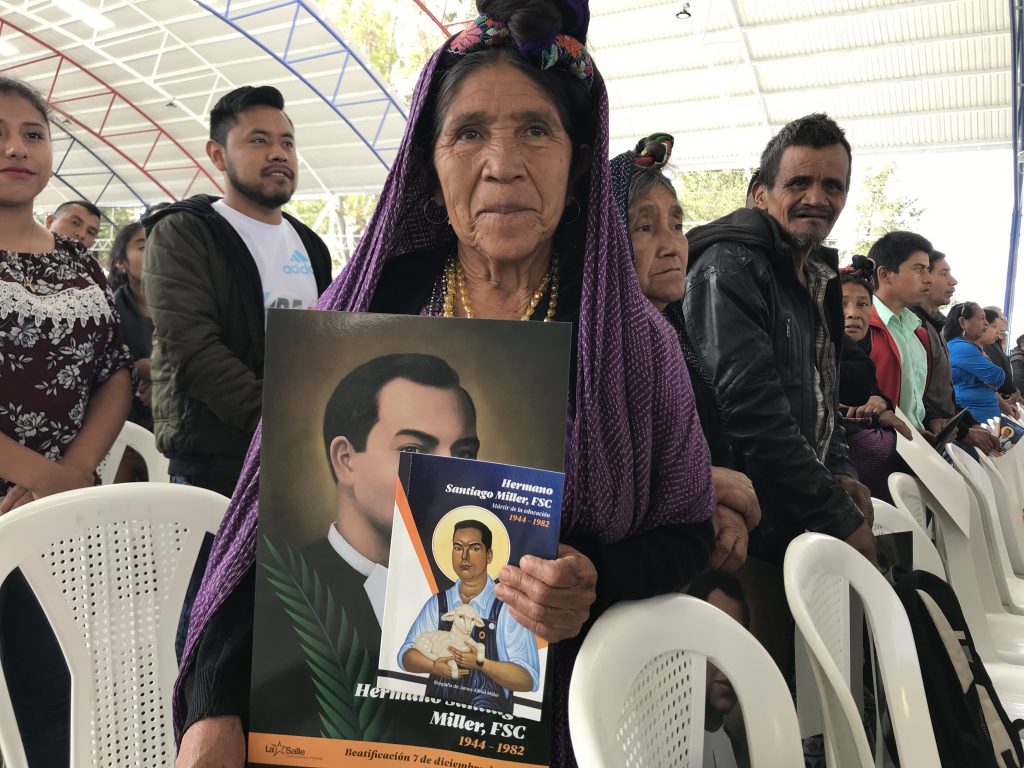 Blessed Miller was remembered as a martyr for education, whose commitment to teaching, mentoring and protecting the young Mayan men in his care — amid the atrocities of Guatemala’s civil war — cost him his life.

“The project and work of Hermano Santiago,” as Blessed Miller was known, “is a point of reference, as much for the La Sallian community as it is for all Christian educators, regarding the truthfulness and relevance of Catholic education,” said Cardinal Jose Luis Lacunza Maestrojuan of David, Panama, celebrant at the beatification Mass.

“Catholic education belongs to the evangelizing mission of the Church,” he added in his homily.

“The pastoral work of Hermano Santiago so consumed him to the point of him being murdered. There is nothing that makes authoritarians uncomfortable — be it on the left or the right, be it from yesterday or today — than education. That is why they were so adamant to suppress the freedom to teach, and to suppress education itself, even if they had to deny a basic human right like a parent’s right to choose the education they want for their children.”

Christian Brothers in their black habits, high school students in jeans and T-shirts and indigenous women in colorful embroidered skirts and blouses clutched photos of the boyish-looking Blessed Miller, who spent barely 13 months in Huehuetenango, but left a legacy of service to the poor and indigenous.

Blessed Miller’s life and legacy served as a reminder to maintain “the option that motivated his coming to Guatemala, the option in favor of the poor and indigenous,” Cardinal Alvaro Ramazzini Imeri of Huehuetenango told Catholic News Service.

“He came here to give himself to this mission. So that option continues being urgent and is a priority in this diocese because, in spite of all these years, poverty has increased. That’s the reality.”

Blessed Miller’s work in Huehuetenango highlighted the plight of poor and indigenous Guatemalans, who often live in isolated and marginalized communities without access to education or basic services.

He mentored the young men in his care and, according to colleagues, he hoped to turn them into leaders, who would return to their communities as professionals and promote a transformation among a population excluded from the broader society.

“There isn’t a people … more able to be manipulated than a people lacking awareness, lacking discernment and lacking values,” Cardinal Lacunza said. “Brother Santiago, through his pastoral work to indigenous peoples and the poorest of the poor, was aware of their dignity and their rights and of responsibilities, because he challenged the authoritarian and abusive system of those who thought only of themselves.”

He served most of the 1970s on Nicaragua’s Atlantic Coast, where he directed a Lasallian Christian Brothers school. He deftly navigated the dictatorial regime of Anastasio Somoza, necessary as the school received public funds, but risky as the Sandinistas, who took power in 1979, saw him as an adversary.

He left Nicaragua for his own safety and eventually arrived in Huehuetenango in 1981, during the depths of a civil war, in which death squads razed Mayan villages and soldiers forcibly recruited young men.

Blessed Miller knew the risks. He wrote home in a 1981 Christmas letter: “The level of personal violence is reaching appalling proportions (murders, tortures, kidnappings, threats, etc.), and the Catholic Church is being persecuted because of its option for the poor.”

The letter continued: “God knows why he continues to call me to Guatemala, when some friends and relatives encourage me to pull out for comfort and safety. … I place my life in his providence; I place my trust in Him.”

News of a threat arrived shortly thereafter: Members of a military death squad were searching for a deputy director of the school. Blessed Miller and his colleagues had increasingly come into conflict with soldiers as they would demand the release of indigenous men living in the Christian Brothers’ “Casa Indigena” boarding home, who had been forced into military service.

On Feb. 13, 1982, while many of the young men in the Casa Indigena were attending a Valentine’s Day picnic, Blessed Miller was shot in broad daylight by three assailants while he was up on a ladder, fixing the boarding home’s exterior wall.

The La Sallian Christian Brothers and Diocese of Huehuetenango started pushing for the beatification of Blessed Miller, along with other Catholic martyrs from Guatemala’s 1960-96 civil war.

Christian Brother Benjamin Rivas, who helped advance the beatification of Blessed James, said the diocese had hoped to include causes of four indigenous catechists slain in the civil war along with Blessed Miller, but many witnesses were fearful of speaking.

“This beatification (of Blessed Miller) is also to not forget the blood of these people, of all the people who died,” in the civil war, Brother Rivas said. “It’s to recognize the innocent blood spilled in this time of conflict.”