The Catholic world received a recent shock when it was discovered that a priest in Arizona invalidly baptized an unknown number of Catholics during his years of service to the Diocese of Phoenix. This came a couple of years after a priest in Michigan, by watching the video recording of his own baptism, discovered that the deacon who performed it did so improperly, thereby rending his baptism, confirmation and even ordination to the priesthood invalid – as well as numerous other sacraments that he had administered.

There is a great deal of confusion and even anger around these cases, both for Catholics and non-Catholics. In both cases, the sacrament was invalid because of one word – “We.” Many people ask: how can this make a difference in one’s salvation? Why is the Church so exacting when this affects the lives of so many people? Father Mark Gurtner, Vicar General of the Diocese of Fort Wayne-South Bend sat down with Today’s Catholic to address this issue.

Q: As Catholics, what difference does it make how we say those kinds of things?

Father Gurtner: The sacraments have been given to us by the Lord in a certain way (which is passed down to us through both Sacred Scripture and Sacred Tradition), and for them to be effective, for every sacrament, there’s a particular matter and a particular form. So, for example, for the Eucharist, the matter is bread and wine, and the form is the words that are said of Jesus at the Last Supper, and those words have to be said as they’re supposed to be said in order for the Eucharist to take place. It’s the same with baptism. There’s a certain matter and a certain form. The matter is the washing with water and the form is the words “I baptize you in the name of the Father, and of the Son and of the Holy Spirit.” And to use words other than that would not be the actual form of the sacrament. In the recent case, the substituting of “we” instead of “I” – “We baptize you” – is not the form of the sacrament, and so the sacrament doesn’t happen.

Q: Can you explain the difference between “we” and “I”?

Father Gurtner: We believe that when anyone baptizes, it’s really not the person who is baptizing, but Jesus Himself baptizing through the person; Jesus performs every baptism. And so, that’s the “I” – referring to Jesus – “I baptize you.” I think the motivation for the one who substituted the “we,” I don’t know his mind, but I assume he was thinking “we” in terms of the community – “We baptize you …” That’s not how baptism takes place; it’s not the community that baptizes, it’s Jesus that baptizes. 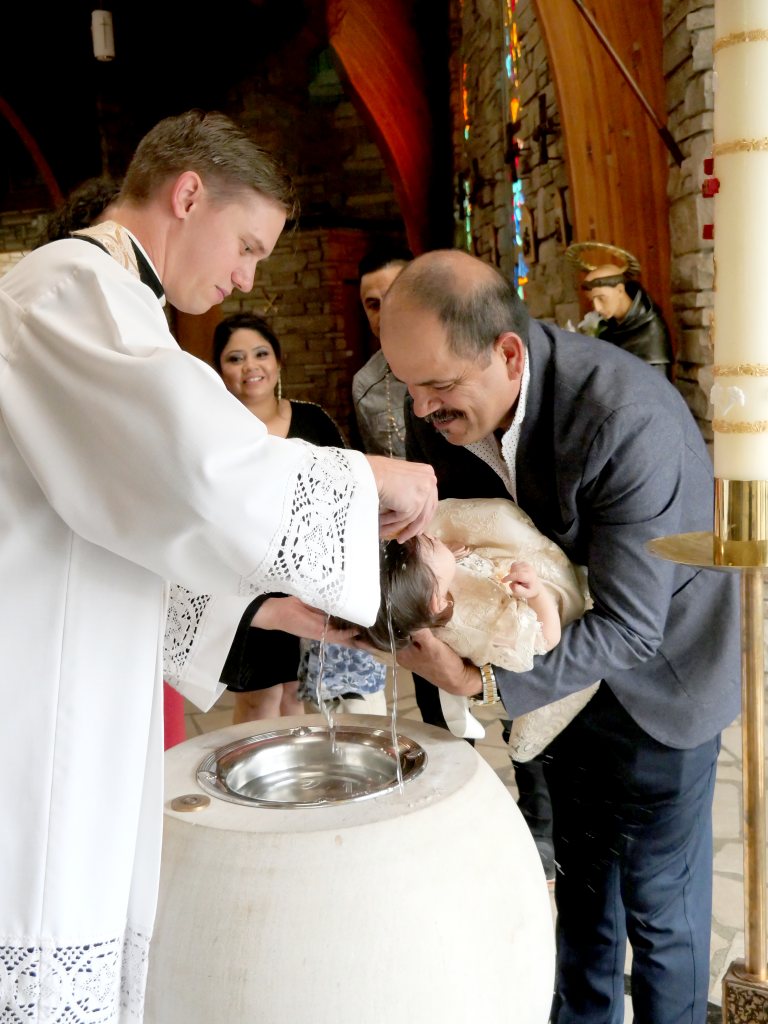 Jennifer Barton
Father Daniel Niezer baptizes a baby girl at his parish of St. Dominic in Bremen as her parents look on in the background. The recent admission of a priest in Arizona that he had performed numerous invalid baptisms has caused an influx of questions on what makes a baptism valid.

Father Gurtner: So, there’s no difference as long as the other denominations, when they baptize, use the proper form, “I baptize you in the name of the Father, and the Son and the Holy Spirit” and the proper matter, washing with true water. Obviously, there are a lot of denominations that do that: the Methodists, the Lutherans, the Episcopalians and so forth. There are some that we don’t recognize as valid because either the form or the matter is not correct. For example, there are some groups of Pentecostals that do not baptize in the name of the Trinity; they only baptize in the name of Jesus, so that would not be proper form and therefore, the baptism would not have happened. We do not accept Mormon baptism because they don’t believe in the Trinity the way we do, so the intention to baptize in the name of the Trinity is not there. So, for the most part, most non-Catholic baptisms would be valid.

Q: What about Protestant baptisms where they dunk the person in a river or lake?

Q: Are there other parts of the baptismal ceremony that people might not understand that should be included?

Father Gurtner: The baptism should always be done according to the rite of the Church, but those other things, if they were not done properly or if they were omitted, would not affect the validity of the baptism. Those things are what they call “explanatory rites;” they explain what the baptism is, so those things are really good and should be followed, but it wouldn’t be a matter of validity if they were excluded.

Father Gurtner: In the case of emergency baptisms, you might not have time to do all those rites, so it’s just enough to do the actual baptism itself.

Q: And that can be done by?

Father Gurtner: Anyone, yes, in cases of emergency; an immediate possibility of dying.

Q: Obviously, these are isolated cases. But if you found out your baptism was not valid, what would you have to do?

Father Gurtner: I think someone should, first of all, call the chancery and then let us sort of explore what needs to be done, because there are repercussions for not having a valid baptism, in terms of confirmation, first Communion, marriage. All those things would be invalid if a person is not baptized. Now, that being said, people should know that this is extremely rare, so we don’t want anyone worrying. Everyone should presume their baptism is valid; it’s only in the extremely rare case that there’s proof that the minister didn’t do it correctly.

Q: If you find out that your baptism was invalid, do you have to go through those sacraments again?

Father Gurtner: Yes. Everything. It wouldn’t take that much to do all that. It’s more problematic with the case in Detroit where it was actually a priest who found out that he wasn’t baptized and that becomes way more problematic because everything the priest himself did was invalid. You have a double tracking down of everyone. But if a person found out that they were invalidly baptized, it wouldn’t take too much to fix it. I’ve never heard of that happening in our diocese.

Q: Have you ever met anyone personally that had an invalid baptism?

Father Gurtner: Not anyone personally. Before these recent cases, I heard of, back in the 80s, a group of priests in Boston that were baptizing in the name of the Creator, the Redeemer and the Sustainer, and Rome weighed in on those and said they were invalid, so they had to do this same thing; try to contact those who had been baptized and try to fix all the repercussions of that. But really, that is the last time I’ve heard of until these two recent cases.