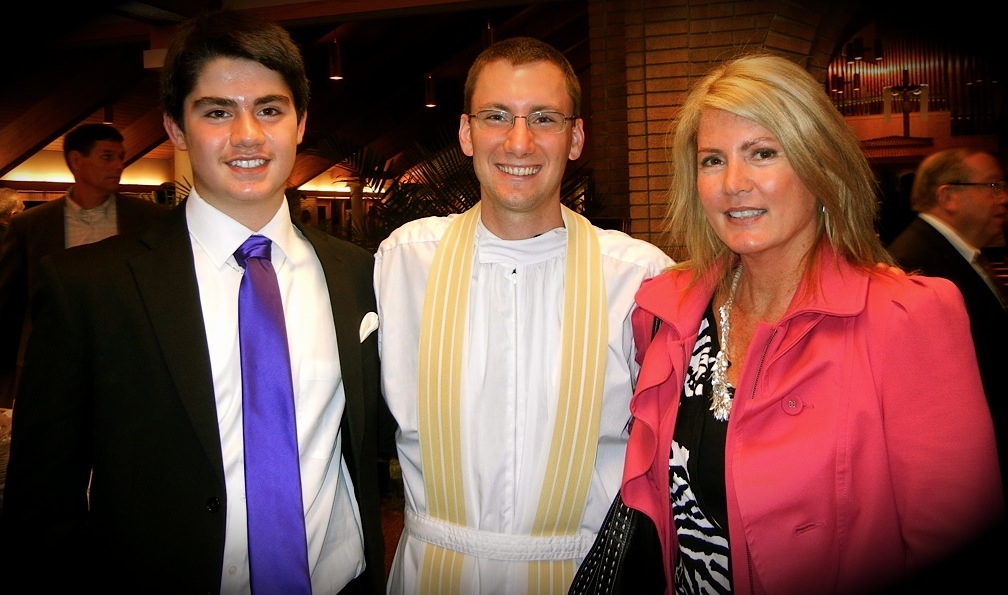 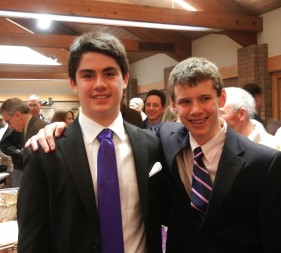 GRANGER — Many of the decisions we make in life as children are made or influenced by our parents. That is why it is remarkable that two young men who responded to the call to become Catholic, did not come from this faith background.

In the fall of 2011, sixth grader Matt Forsey, and eighth grader Jack Buckey, both students at St. Pius X Catholic School, began their extraordinary faith journey, which led to receiving the sacraments of initiation at the 2012 Easter Vigil.

Matt is currently a seventh-grade student at St. Pius X, and Jack is now a freshman at Saint  Joseph High School in South Bend.

Today’s Catholic recently spoke with these young men, their parents, sponsors, the director of religious education and parish priest in recalling the milestones and memories of their catechetical process.

For Matt Forsey, the twice weekly Mass offered by St. Pius X School was a turning point in his journey to Catholicism. “I knew I wanted to become Catholic during the Eucharistic Prayer, watching the priest’s reverence in the Transubstantiation of the Body and Blood of Christ,” he recalls.

Eucharistic Exposition of the Blessed Sacrament was another way for Matt to connect with Christ, he emphasized. Besides reciting the rosary, chaplets and other prayers during his visit at Eucharistic Adoration, Matt would read books such as “Introduction to the Devout Life” by St. Francis De Sales and “Divine Mercy in My Soul” by St. Faustina.

Since his Confirmation in the Catholic Church, Matt’s frequent use of the sacrament of Reconciliation has been a source of strengthening his faith. When giving a stewardship talk at parish Masses, Matt attested to the power of regular Confession.

“Confession really is a gift from God. We get the sins we confess forgiven, the ones we forget forgiven, the guilt that we feel from doing something wrong removed, and the grace to stop sinning,” Matt explains.

Toward the end of seventh grade at St. Pius X School, Jack Buckey attended Easter Mass with a friend and it had a lasting impact on the young man. “It was a beautiful Mass and seeing all of it made me want to be a part of it,” Jack remembers.

Jack also recalls that the religious education director of St. Pius X, Dan Allen, was instrumental in discussions of the Catholic catechism. Because of Jack’s football practice after school, Dan volunteered to stay after practice concluded and discuss with Jack what he had missed in class.

Says Dan, “Jack came to our classes eager to learn. He and I did stay late together after he arrived from football practice in the fall to discuss what he had missed during the regular class time. This never seemed like a burden for him, and he was truly engaged and interested in the process.”

“Being my first year teaching the class, it was actually a pleasant surprise to have someone so engaged. While Jack did not always ask as many questions as some other students, he would listen attentively, and when he did speak, I could tell that he was prayerfully processing the lessons,” Dan adds. 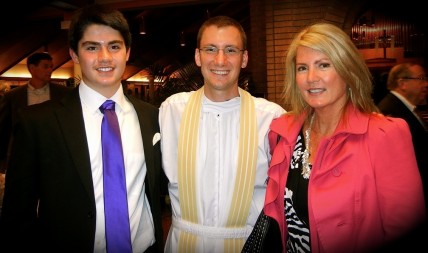 Both Rite of Christian Initiation of Children (RCIC) sponsors of the two young men recall wonderful milestones of Jack and Matt’s faith journey.

Mary O’Hannigan, who was Matt’s sponsor, recalls his desire for learning about the Catholic faith.

“Matt’s enthusiasm and heart for the Catholic faith is inspiring. He is always questioning, to the point that I was often tempted to swing by the rectory and pick up Father Bill or Father Terry for our daily car rides home from school. Matt’s curiosity about all things Catholic is insatiable. So I did my very best to answer his questions, but there were few times I would respond, ‘I don’t know. Let me find out and get back with you on that one!’” says Mary.

Preparing for the Triduum was a high point for both Matt and Mary.

“When we were approaching the Triduum, Matt was planning out his schedule to attend as many events as possible. Wanting to be a good sponsor and knowing he was eager to attend every event, we decided to attend most everything with him. This included the Good Friday service, which I have always avoided because I cry easily and didn’t want to embarrass myself, or embarrass my family! So there we sat, in a packed church on Good Friday,” Mary remembers.

She continues, “When it came time to approach the Crucifix, which was now lying on the altar instead of hanging above it, I was a wreck. Thankfully, my husband Joe always keeps tissue handy. It was powerful, joyful, sorrowful and there was Matt with our family. His parents have raised a fine son, and I am honored when people ask if he is ours.”

“I truly believe Jack was called to attend St. Pius X Grade School and through his experiences in school, he was called further and deeper into the Church. Jack transferred to St. Pius X Grade School at an unusual time. He entered in the seventh grade. This was a challenge as most of the students in his grade had been together since the fifth grade. Making new friends and building new relationships might be intimidating for many young men, but Jack knew he was meant to be there,” says Kevin.

Kevin recalls a story that Jack’s mother Laura shared with him.

“On Jack’s very first day of school at St. Pius, during morning drop off and as the students got out of their cars, they were greeted by some of the staff, including Principal Elaine Holmes. Since it was the first day, Father Bill Schooler happened to be out welcoming the students back for a new year. After Jack got out of the car, he walked up to Father Bill, and extended his hand to introduce himself. Instead of a handshake, Father Bill welcomed him with an embrace. Jack’s mom Laura was deeply touched and from that very moment, she knew Jack was in the right place,” Kevin notes.

Kevin adds, “His personal development and desire to grow deeper in his faith started from the first day in school and continued over his next two years. He thrived academically, in sports, and was the lead in the St. Pius musical in eighth grade. He also thrived spiritually during these two years and felt he wanted to be something more than a student, but something much greater, a member of our faith.”

Msgr. Bill Schooler and Jack Buckey are all smiles at the 2012 Easter Vigil.

Jack and Pam Forsey say that they feel a connection to the Catholic Church through Matt’s faith journey.

“When he was going through the RCIC process, one or both of us went every week last year,” Pam says. “We have learned a lot about Catholicism in the process, because he is always telling us about the saints and history of the Catholic Church.”

Pam also recalls that on a recent trip to the Museum of Art in Chicago, Matt shared with his parents the Catholic symbolism in some of the paintings of famous artists. “There were people standing around us and they were listening as Matt spoke,” Pam explains.

Laura and Scott Buckey are equally supportive in Jack’s choice to become Catholic.

“We are encouraging Jack to use his faith in good times and bad. Faith is very important to our family,” says Scott.

“We encourage him to be our spiritual guide in our house and Jack says the prayers at dinner in our home,” Laura emphasizes. “It is nice to see that Jack has taken this as a priority for himself,” Scott adds.

St. Pius X director of religious education Dan Allen and pastor Msgr. Bill Schooler both attest to seeing the wonderful growth in faith of these young men in the past two years.

“It seemed like the Holy Spirit blessed me in a special way sending Jack and Matt during my first year teaching the RCIC. It was such an inspiration to me, a lifelong Catholic, to meet two young men so ready, willing and eager to be Catholic,” says Dan. “I keep them in my prayers still as they continue to develop and change, and they give me hope for the future of the Church, renewing my confidence that the Gospel of Christ still touches human hearts in every age.”

And “Father” Bill, as he is affectionately referred to by his congregation, concludes, “When we opened our Catholic school, we had hoped that the school would help with evangelizing. Although the vast majority of our students are Catholic, those few who are not Catholic come to Mass and take religion classes. It was the contact with the Eucharist that first drew Jack and Matt, along with the catechesis they received in class. I am very proud of those young men!”