Bishop Daniel Jenky, bishop of Peoria, Ill., lays hands on Holy Cross Father Brian Ching, Holy Cross Father Mark DeMott and Holy Cross Father Jarrod Waugh during the Mass of Ordination to the Priesthood on Saturday, April 6. Bishop Jenky, a Holy Cross priest, celebrated the 39th anniversary of his ordination on Saturday as well.  Following ordination, Father Brian Ching will continue to serve at St. Joseph Parish, South Bend, Father Jarrod Waugh at Christ the King Parish, South Bend, and Father Mark DeMott will return to the University of Portland, in Oregon, where he serves as a residence hall director. 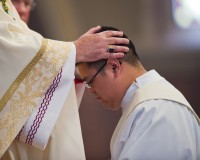 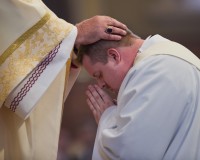 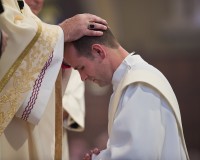 NOTRE DAME — Three deacons of the Congregation of Holy Cross, United States Province of Priests and Brothers, were ordained to the priesthood at 2 p.m. on Saturday, April 6, at the Basilica of the Sacred Heart on the campus of the University of Notre Dame.

By professing perpetual vows of poverty, chastity and obedience, Deacons Ching, DeMott and Waugh have already committed themselves to the common life and the apostolic work of the congregation. As Holy Cross priests, they will minister the sacraments of the Church, making God known, loved and served throughout the world.

“All of us in the province are enormously proud of these three young Holy Cross men. Our prayers and support are with them as they prepare for this most sacred day,” said Father O’Hara. “Each will be a blessing to God’s people whom they will serve as priests of the Congregation of Holy Cross.

Brian Ching is the eldest of Debbie and Fred Ching’s two children. Born in New York City, he grew up in Flushing, N.Y., first encountering the Congregation of Holy Cross at Holy Cross High School, where he graduated from in 2003. He continued his education with Holy Cross earning a bachelor’s degree from the University of Notre Dame in 2007 and a master of divinity degree from Notre Dame as well, in 2012.

Deacon Ching entered the Old College Undergraduate Seminary program at Notre Dame during his sophomore year in 2004 and spent a semester studying at the American College, a seminary administered by the American bishops in Louvain, Belgium. During his time at the Holy Cross Novitiate (2007-2008) in Cascade, Colo., Deacon Ching served as a volunteer chaplain with Penrose Hospital in Colorado Springs. He has also served as a religious education teacher at St. Pius X Catholic Church in Granger. Deacon Ching spent a year (2010-2011) as a seminarian intern at Holy Cross’ St. John Vianney Parish in Goodyear, Ariz. During that year he worked with the RCIA program, prepared couples for Marriage and Baptism and preached regularly in a bilingual parish community. Deacon Ching professed first vows on Aug. 2, 2008, and final vows on Aug. 25, 2012. He is currently serving as a deacon at St. Joseph Parish, South Bend.

“My hope for my future in Holy Cross is actually pretty simple: To serve the Lord and His people and to serve them well. What that service might look like, whether in a parish or on a college campus or in direct service to the poor, may well change, but so long as I get to serve the people of God, I will be happy as a Holy Cross priest,” Deacon Ching said.

During his diaconate year, Mark DeMott has been serving as a residence hall director and campus minister at the University of Portland in Oregon, a Holy Cross university.

The eldest of five children of Dr. and Mrs. John and Jodi DeMott, Deacon DeMott was born in Kansas City, Mo., and grew up in Holland, Mich., where he graduated from Holland High School in 1998. He attended the University of Notre Dame, earning a bachelor’s degree in 2002 and the master of divinity degree in 2007.

Since entering formation with Holy Cross, Deacon DeMott has served at a number of Holy Cross apostolates. His first assignment was as director of Christian formation at St. Joseph Parish, South Bend (2007-2008). He went on to serve at Parroquia Nuestra Madre Santísima de la Luz in Guadalupe, Nuevo León, México (summer 2008); Penrose Main Hospital and Sacred Heart Parish in Colorado Springs (during his novitiate year in 2008-2009); Holy Cross and St. Stanislaus Parish, South Bend (2009-2010), where he served as director of liturgy and music; Saint Joseph High School, South Bend (2010-2011); and Holy Cross Lake View Senior Secondary School, Jinja, Uganda, where he was choir director and also taught chemistry and biology (2011-2012). Deacon DeMott professed his first vows on Aug. 1, 2009, and final vows on Aug. 25, 2012.

The eldest of three children of Jerry and Carolyn Waugh, he earned a bachelor’s degree from the University of Notre Dame in 2008 and a master of divinity in 2012. He lived in Keough Hall for two years and was active in campus ministry and the campus council of the Knights of Columbus before entering Old College as a junior in 2006. Deacon Waugh professed first vows on Aug. 1, 2009 and final vows on Aug. 25, 2012.

During his years as a Holy Cross seminarian, Deacon Waugh served as an adult Bible study catechist at Holy Cross Parish in South Bend (2007-2008); worked with the homeless at St. André Bessette Catholic Church, Portland (summer 2008); served as chaplain at Penrose Hospital during his novitiate year (2008-2009); Holy Redeemer Parish and School, Portland (January, 2009); at Holy Cross Family Ministries, North Easton, Mass. (summer, 2011); and served as assistant director of the Old College Undergraduate Seminary Program at the University of Notre Dame (2011-2012). Over the past year, Deacon Waugh has been at Christ the King Parish, South Bend, leading the RCIA team, serving as chaplain to third through fifth graders at the school, working on Baptismal and marriage preparation programs, chairing the Vocations Promotion Committee and assisting with visits to the sick and homebound.

“I get really excited when I think about what my future might hold in parish work or someday in another area of ministry. One of the reasons I joined Holy Cross is because of the diversity of personalities and talents of the Holy Cross religious that I have met over the years. We are definitely not all alike or cookie-cutter copies. I look forward to working with this talented and varied brotherhood in so many of the places where we minister,” Deacon Waugh said.