The CYO St. Vincent 8 Gold League champions are shown in the photo.

In the White League battle, St. Vincent topped St. Charles, 45-29, while St. Joseph-Hessen Cassel (SJHC) beat Queen of Angels, 41-25, for the Blue League title. Finally, it was St. Vincent in the Gold League with a championship win over St. Joseph-St. Elizabeth (SJSE), 46-32.

The Blue League powerhouse Squires capped off a phenomenal season racking up double medals by going undefeated in league play once again and claiming their sixth consecutive tournament championship. 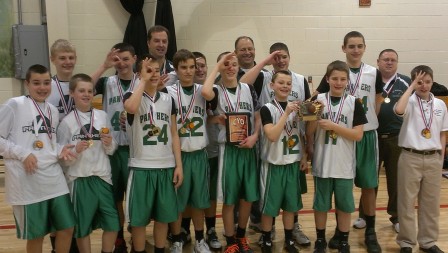 The CYO St. Vincent 7 White League champions are shown in the photo.

He added, “Max Oberley was a great addition this season and adjusted well to his new role inside.”

Knapke also called on five talented seventh graders who were invaluable to his program. When comparing this group to past years, Knapke felt this team had come further from start to finish than any other.

The CYO St. Joseph-Hessen Cassel Blue League champions are shown in the photo.

He added, “Their skills, continuity and overall basketball rhythm really came together from beginning to end.”

Knapke called runner-ups Queen of Angels a tough opponent, “The Royals were well-coached and had a strong big guy (Austin Kinney).”

The eighth-grade team from St. Vincent made it a fourth straight in their CYO careers when they claimed the 2013 title.

Chris Paul coached the team during most of the regular season, but when his duties as head coach for the IPFW women’s team revved up, Courtney Paul and Mick Steele stepped in to finish things off. The Panthers ended with an amazing 23-4 overall record and their stellar league play earned them the No. 1 seed.

Courtney Paul explained, “The season started in November and the boys worked hard all year towards a CYO championship.”

During their highly successful grade school run, Jalen Paul and Conlan Martin led the scoring attack for St. Vincent. The league’s tallest line up, St. Joseph-St. Elizabeth, finished runner-ups in the Gold League, playing an outstanding tournament at the No. 3 seed by knocking off the always-tough No. 2 seeded Cardinals from St. Charles.

St. Vincent’s seventh-grade squad also had a great run this year and won their tournament against a tough team from St. Charles. John Henry Reith and Tommy Steele each chipped in a dozen points in the championship game. The Panthers’ overall record tallied 20-2 and in addition to the White League CYO tourney, they also finished on top at the Hoops Fest. Coach Dale Curry’s squad was full of athletic and talented players. During practices St. Vincent focused on developing fundamental skills. He explained, “Our team goal was to excel with tough defense and rebounding.” The Panthers succeeded averaging 10.9 steals per game and pulled down 69.5 percent of the rebounds resulting in outscoring their opponents by a season average of 21 points.

Curry detailed his biggest challenge this season, “We had a problem getting the boys to work collectively as a team. We had poor passing and decision making during the first half of the season. Fortunately, we were able to overcome these challenges and ended averaging just 10.3 turnovers per game. I commend the boys for their hard work ethic and following direction from the coaching staff.”