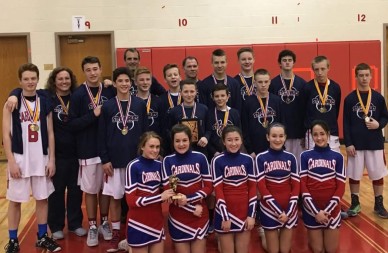 In the Gold League, the St. Charles Borromeo Cardinals were crowned the CYO champions.

The 2016 season also marked the final game for longtime referee, Tom Barkimer, who will be heading south instead of running up and down the CYO courts.

The official record log on the final page of the CYO program lists the team from Auburn as the very first winner of the tournament in 1937. St. Patrick dominated in the early years winning five of the seven titles from 1941-1947. The tournament changed formats in 1984 when two teams, rather than an overall single champion, were crowned: St. Therese and St. Joseph-Hessen Cassel. In later years three, four and sometimes five different league winners were named like in 1998 when St. Jude, St. Therese, St. Rose, St. Charles and St. Joseph-Hessen Cassel were all listed as champs.

Currently, there are three divisions for the CYO: the White League (seventh grade), the Blue League (small schools combined grades 7-8 teams) and the Gold League (eighth grade). Since 2006, St. Vincent has dominated the Gold League winning six titles and has claimed seven championships in the White League, while St. Joseph-Hessen Cassel, under the direction of Coach Jim Knapke, has created a legacy in the Blue League winning every single year since 2008. 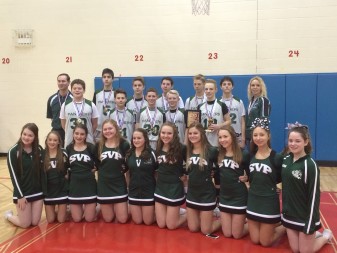 For the seventh-grade league, the St. Vincent de Paul Panthers of Fort Wayne were crowned the CYO champions.

For the seventh-grade league, the top seeded and undefeated St. Vincent Panthers added another title to their long string of wins with an exciting 50-47 victory over a solid team from St. Charles. The Panthers capped off their amazing season as the No. 1 seed and undefeated (6-0) against all of their White conference foes.

Dylan Olson led all scorers with 18 points for the Panthers. Teammate Jackson Paul had 10 and Xavier Nolan contributed nine, while St. Charles’ Sam Pesa had 17 and Devon Tippmann added 10. St. Vincent’s overall record was an amazing 29-5. They were also champions of the Queen of Angels preseason tournament over the Thanksgiving break. 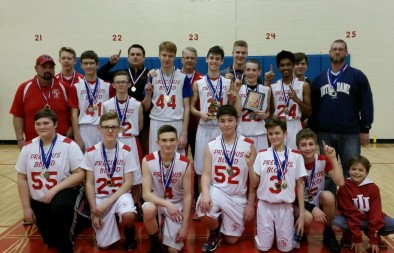 In the Blue League, Most Precious Blood of Fort Wayne was crowned the CYO champions.

After a good many years, a new school took over the Blue League championship honors as the No. 2 seed Most Precious Blood beat out the eight-year reigning champs, St. Joseph-Hessen Cassel in the semifinals — despite three treys from eighth-grader Brett Dodane in the fourth quarter, and then got by the top-seeded and undefeated Crusaders from St. Therese, 37-35, for a thrilling championship.

The first half proved to be a very defensive game with St. Therese up, 16-13, going into the locker room. Most Precious Blood still trailed, 18-25, going into the fourth quarter, but Connor Christman lit up the scoreboard pumping in 16 of his 23 points to lead his team past St. Therese. Christman also had 11 rebounds and two assists in the matchup.

When reflecting on their dream season, Allen summarized, “It has been a pleasure to coach these fine young men. They have worked hard over the last several years to get better. Their toughness is within their will to never give up and play hard no matter the score.” In the loss, Jacob Creager and John Peterson had a dozen points each for St. Therese.

For the Gold League, it was St. Charles whose name will be listed in the 2016 record books with their 54-32 win over a fundamentally sound St. Vincent squad. Once again, the Cardinals, who also won the CYO tournament as sixth and seventh graders, were led by Patrick Finley’s 19 points. Hunter Burns finished with 10 for the Panthers.

In his 20th season at St. Charles, Coach Dan Sordelet summarized, “This was a great bunch of kids who worked hard all season long. They were team players and very unselfish.” Sordelet was joined on the bench by Jeff Maxwell and Krista Sordelet this season. The Cardinals finished their CYO careers with an impressive 20-4 overall record for their eighth-grade year.

The CYO will be represented by Most Precious Blood and St. Therese, along with St. Charles at the Diocesan Championship games on March 6 in South Bend when Fort Wayne meets the best of the best from the ICCL.