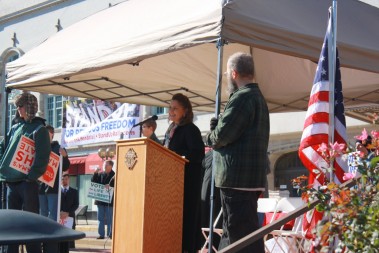 Theresa Thomas, a columnist for Today’s Catholic, speaks at the Rally for Religious Freedom on Oct. 27 in South Bend. She has been active in speaking up for religious liberty and says the HHS mandate violates the consciences of millions of Americans who are being ignored.

SOUTH BEND — “Those who do not stand up when their neighbors’ rights are being trampled on will soon find that their own are threatened.”

Theresa Thomas both applauded and exhorted the crowd gathered outside on a crisp, sunny Saturday in South Bend, emphasizing the importance of standing up for religious freedom in the face of current attempts by the government to impose restrictions.

About 200 people gathered on the plaza in front of the Morris Civic Center for the Rally for Religious Freedom on Oct. 27, a day of prayer and peaceful protest of the Health and Human Services (HHS) Mandate.

“The current administration and its agencies have refused to properly respect and accommodate the faith and convictions of millions of Americans,” said Thomas. “They are forcing Catholics and others to go against their consciences and pay for contraceptive devices and abortifacient drugs.”

Thomas, a columnist for Today’s Catholic, is a wife and mother of nine. She has been active in speaking up for religious liberty and says the HHS mandate violates the consciences of millions of Americans who are being ignored. If it is not overturned, the mandate will be fully in place by 2014.

“Government officials and agencies do not care that Catholics and others object to being forced to pay for contraceptives and abortifacient drugs,” continued Thomas, ignoring the lone protestor who attempted to disrupt the rally by shouting through a bullhorn. “They do not care that this HHS decree violates consciences and goes against a 2,000-year tradition of faith. This is not just a Catholic issue. This is a general religious and moral issue.”

A variety of faiths were represented at Saturday’s rally. Opening prayer was provided by Father Camillo Tirabassi, a retired pastor who resides at Holy Family Parish in South Bend. He was joined by Father Jim Rosselli, a Western Rite Orthodox priest from LaPorte and Pastor Steve Sumrall of Christ’s Chapel in South Bend.

Before his opening prayer, Father Tirabassi read a letter of welcome from Bishop Kevin C. Rhoades.

The bishop wrote: “The free exercise of religion guaranteed by our Constitution necessarily includes the right to refuse to participate in activities that one considers morally wrong. Until recently our nation has always respected that right. The HHS mandate represents a dangerous and dramatic departure from our centuries-old tradition, for it would force almost all religious employers, whether institutions or individuals to facilitate practices they consider gravely immoral.”

Bishop Rhoades also quoted Pope Benedict XVI: “Religious freedom is the pinnacle of all other freedoms. It is a sacred and inalienable right.”

Dr. Charles E. Rice, professor emeritus of law at the University of Notre Dame, specializes in constitutional law and jurisprudence. He referred to St. Thomas Aquinas who said an unjust law is no law at all.

“When the state commands citizens to obey a law that would force them to do what God has prohibited,” quoted Rice, “then that law must be disobeyed.”

Rice also drew upon the recent movie and companion book “For Greater Glory,” reflecting on the persecution of the Catholic Church in 1920’s Mexico. Then, religious liberty was fiercely attacked by the anti-clerical Mexican government. Rice referred to a passage in the book telling of a meeting between Mexican President Plutarco Calles and Bishop Pasqual Díaz of Tabasco. The bishop appealed to Calles for freedom of conscience to which Calles replied, “The law is above the dictates of conscience.” Rice then said that this is exactly what is going on with the Obama Administration’s insistence on compliance to the HHS Mandate.

Rice concluded his comments with a reminder of the importance of prayer and mentioned Our Lady’s intercessory role in the 1571 Battle of Lepanto in which the outnumbered Christian fleet defeated the navy of the Muslim Turks.

Prayer was woven throughout the rally as the three religious leaders stood shoulder to shoulder and lead the crowd in praying Psalm 63.

Rally captain Tom Uebbing encouraged everyone to stand up for religious liberty by witnessing through word, deed and prayer.

“The government that claims authority over the consciences of men and women is a tyrannical government,” said Uebbing, “and there is nothing in principle that government cannot force its citizens to do.”

Thomas asked God’s protection and said the faithful must recognize that the HHS mandate is a dangerous intrusion into the lives of individual citizens and employers.