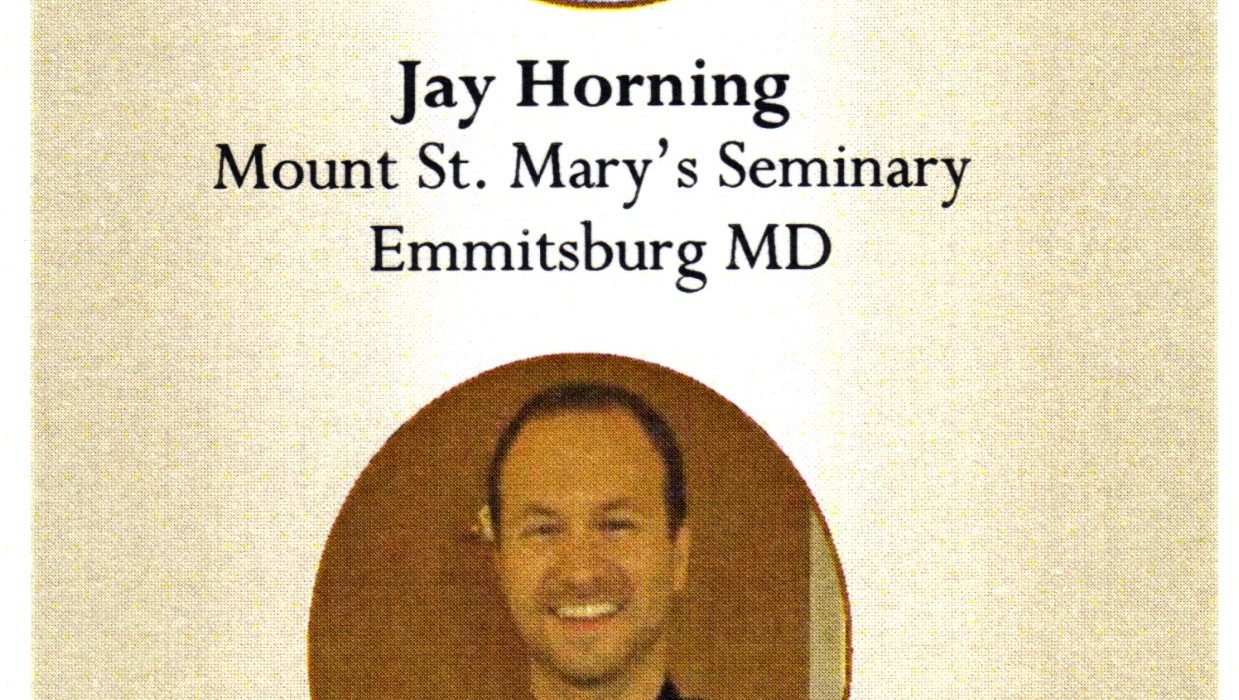 FORT WAYNE — St. Elizabeth Ann Seton Parish, a large, vibrant parish on the southwest side of Fort Wayne, is celebrating its 25th anniversary this year. But the silver jubilee is not the only thing this faith-filled community is celebrating. Vocations have literally exploded recently at the parish with four young men discerning the call to the priesthood this year. These are the first vocations in the history of this dynamic parish.

Father Jim Shafer, pastor of St. Elizabeth, says these vocations are “awesome and truly a gift from God.” When asked what stirred this recent interest, Father Shafer admits he and Father Drew Curry, a former parochial vicar, were “actively working with the young people of the parish.” And though the parish community rallied with financial support that purchased the seminarians’ cassocks, the “most important and greatest contribution is the outpouring of love and prayer support for them,” says Father Shafer.

The vocation explosion began a couple of years ago when Royce Gregerson answered the call to consider life as a priest. He is currently a second-year theology student studying in Rome. Then last year, Father Shafer reports, three young men approached him to discuss discernment. All three were “heavily involved in the parish through work or volunteering,” he says.

The “Sons of Seton,” as the three friends have become affectionately dubbed, thanks to a brainstorming session at a local pizza parlor, Jay Horning, Daniel Neizer and Howard Jankowski, each come from different walks of life with his own diverse vocation story. But they have found one important thing in common — the call to a life of service as a priest.

Jay Horning encountered a deep yearning for faith while in college at the University of Saint Francis. During his senior year he participated in the R.C.I.A. at St. Elizabeth Ann Seton Parish and in 2010 he was received into the fullness of the faith. He held the youth minister’s position at St. Elizabeth for two years.

And even though he thought he would marry one day, he says with the positive influence of the staff at St. Elizabeth, suggesting that he might make a good priest, Father Shafer’s example of joyful priesthood and the youth he ministered to in the vibrant youth group there, he began to consider the call.

Howard Jankowski is a graduate of St. Matthew Grade School, Marian High School and Ball State University. He held a teaching position at Homestead High School in Fort Wayne for six years before entering the seminary and notes that his Catholic upbringing, music and the example of family and friends fueled his calling that built during his college years. It was then that he began to attend daily Mass and first encountered Father Drew Curry who posed the vocation question to him. Jankowski’s response — “I said, ‘No,’ rather impolitely, and let him know that I taught at the school across the street and had already figured out my life. … The problem was that I couldn’t stop thinking about the encounter…” he says.

Thanks to the encouragement of his parish family he continued to become more involved in parish activities and wrestled with persistent thoughts of the priesthood during a Christ Renews His Parish weekend. It was then that he sought his pastor out to discuss vocations.

Dan Neizer graduated from Bishop Dwenger and was attending his first year at Wabash College when he realized he was being called to a vocation. He credits his pilgrimage to World Youth Day in Madrid in 2011 to this awakening. “World Youth Day not only opened my eyes to a vocation, but it also opened my eyes to the love and joy rooted in the Catholic Church. … I was surrounded by priests, seminarians and religious sisters and brothers who all taught me by example how to live a joyous life,” he says. During his year at Wabash he soon realized that he needed to rely on the Lord to be his strength and thereafter that He was calling him to another way of life.

Unknown to each other, all three young men met separately with Father Shafer for spiritual direction and found through his guidance that seeking a vocation was right for them. Neizer notes, “What was amazing was that three men who were great friends yet all on different journeys of faith, came together to enter the seminary without knowing that the other was doing the same thing. Surely, it was the work of the Holy Spirit …”

Sue Uelk, director of parish administration, reports that the parish community rallied to support the young men as soon as the vocations were announced. “It was a parish-wide event,” she says. Uelk designed a logo for the seminarians and had T-shirts printed for them as well. A prayer was created and printed on cards along with photos of the young men in their cleric collars for parishioners to use as a prayer guide. A pillar candle burns continuously for the Sons of Seton in the St. Elizabeth votive alcove and the parish has a wall dedicated to these seminarians where their pictures hang with the logo and a “request for prayers” plaque as a reminder of the gift of vocations. Uelk says there is plenty of space for pictures of future men and women who will answer the call to religious life.

The three men left for seminary in style after a sending forth blessing by their supportive pastor and parish community during one weekend at all the Masses.

The people of St. Elizabeth Parish not only pray for their seminarians but support them with notes and emails as well. Father Shafer says, “These guys sense the love and prayers. When they tell their fellow seminarians, they are surprised. … It’s all these things — the prayer cards, logo — the little things we did as a parish community to make them more in the center of our lives and prayer that is so crucial.”

The three seminarians agree that St. Elizabeth community is their family. Jankowski says of this amazing outpouring, “Just knowing that there are devout people praying for us that way gives me strength in my studies and formation at seminary.”

Horning agrees, adding, “They give me the fuel, desire, affirmations and reminder of why I am seeking this vocation.”

For those considering a vocation the three agree that though there are many vocations, exploring the religious life is an exciting adventure. If God is nudging, don’t be afraid to talk to a trusted priest or sister about it, they say. Neizer concludes, “Always be open to the possibility, but more importantly, always strive to be holy.”

We Pray for
Our Sons of Seton

We thank you for blessing St. Elizabeth Ann Seton Parish with the gift of vocations to Your holy Priesthood. Continue to open the hearts of each parish family so that we may live the faith we profess; welcome You in word and sacrament; and become the source of new and holy vocations.

We pray that our seminarians will know the love and support of their parish family each and every day. Shower them with Your abundant grace and bless them as they follow the course You have set for them.

St. Elizabeth Ann Seton, our patroness and guide, we ask your protection and guidance on our Sons of Seton; Royce, Jay, Howard and Dan. May they follow your model, making the first rule of their daily life and work doing God’s will, with no other desire but for its most full and complete accomplishment, as you did in your life.