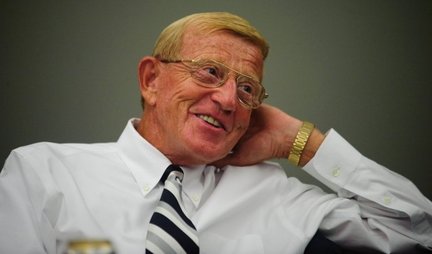 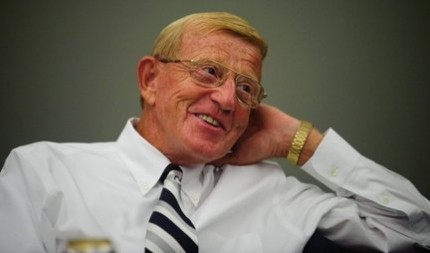 One would be hard–pressed to find a more knowledgeable and enthusiastic coach than Notre Dame’s legendary Lou Holtz. Coach Holtz is one of college football’s icons, and after retiring from coaching he has among many activities, served as an entertaining TV college football analyst. Coach Holtz has a knowledge and wisdom that is difficult to challenge. He was graciously willing to answer some questions submitted by Today’s Catholic regarding his personal young life and how his participation in youth sports has helped to shape his life’s outlook.

Today’s Catholic:  First, thank you, Coach Holtz, for agreeing to a written interview. I know you have a busy schedule with football season approaching. I’m sure that your wisdom will be well received by our readers. Let’s get started …

Today’s Catholic:  How old were you when you first became active in sports?

Lou Holtz:  I was in the fifth grade when I played on the eighth grade football team. The reason I was able to do this was because my uncle was the football coach.

Today’s Catholic:  Do you have an early memory that you want to share?

Lou Holtz:  One memory I have was of being put in a football game as a safety, and (I) had a chance to tackle a guy who was in open field. I ducked my head and made no attempt to do so. I then said it was because my helmet fell in my eyes, but my uncle knew that wasn’t the truth. That hurt more than making the tackle would have. From that time on, I can’t recall another time I shied away from contact.

Today’s Catholic:  Is there anything from your early days in sports that you still carry with you today?

Lou Holtz: I carry a lot of things with me from early sports, including baseball, basketball and football. Some were successes and some were failures, but the one thing you learn is that this too shall pass. You do the very best you can and move on. It’s not about you, but about the obligation you have to other people.

Today’s Catholic:  What positives can youth sports instill in a youngster today?

Lou Holtz: Youth sports can play a great role in the development of an individual, as long as it is up to them to participate. In other words, a parent can’t decide if their child will play football or basketball or anything else. I think you have a natural desire to compete and you find out a lot about yourself. Handling adversity is every bit as important as handling success.

Today’s Catholic:  Is there one value, most important, that youth sports should focus on?

Lou Holtz: If there is one value, it should be that all we can ask of anyone is that they do the best job that they possibly can and learn that when you join a team, a business, bring a child into the world or join a spouse, you have obligations and responsibilities and you must fulfill them.

Today’s Catholic:  The NFL has its initiative, Play 60, for youngsters. What’s your opinion on that?

Lou Holtz: I am not familiar with Play 60 for youngsters.

Today’s Catholic:  Is there a word of advice you want to share with a coach of a young team?

Lou Holtz: The best advice I’d want to say to a coach is to make sure they have fun, learn the fundamentals and learn the value of discipline and sacrifice.

Today’s Catholic:  Is there a word of wisdom you want to share with a parent of a youngster?

Lou Holtz: If there is a word of wisdom I might want to share with a parent of a youngster, it would be to let the child grow and don’t try to protect them from adversity. Adversity is part of life. We are now trying to make it where everybody gets a trophy, and this is not the way life is. The last thing I would tell a parent is to make sure your child knows how to make good choices. Whatever happens in your life, good or bad, it’s because of choices you make. Remember that there is never a right time to do the wrong thing and never a wrong time to do the right thing.

Today’s Catholic:   Do you have any grandchildren that are or were active in youth sports?

Lou Holtz: I have several grandchildren who participate in active sports. Fortunately, most of them have been very successful. However, we try to keep life in perspective. All we want is for them to be the best they can be. Whether they win or lose, they are still going to be my grandchildren and I’m still going to love them.

Today’s Catholic:  Thanks so much for agreeing to our interview, and wishing you the “Luck of the Irish.” Is there anything you want to add in conclusion?