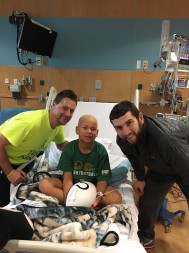 SOUTH BEND — When he was only a kindergartener, Nolan Dobrucki’s mom, Amy, noticed some usual bruises that tend to appear on five-year-old boys. However, when the bruises reappeared weeks later, along with some new rashes and skin irritations, it was time for a trip to the doctor. After years of tests, trials and errors in assessment and treatment, Nolan was finally diagnosed this year with Severe Aplastic Anemia. The loss of red and white blood cells, as well as platelets, has led young Nolan through numerous medical treatments, including his current prolonged stay to Riley Children’s Hospital in Indianapolis. This last October, five and a half years after those first warning signs, Nolan began chemotherapy and received a bone marrow transplant.

The Dobruckis are parishioners at Holy Family Parish in South Bend and their children, Nolan and Mya, also attend the school. As life-long Catholics, their faith “has helped the whole process,” Shannon Dobrucki explained. “It puts everything in perspective … and has given us a community of support. From the school and parish, the support is the best thing.”

From wonderful parent groups to the loyal student body, Holy Family has reached out and cared for the Dobruckis in various ways. Shannon said, “Letting people help you was hard for me at first … but then I saw how letting them help us also helped them.”

From meals and gas cards, toys and clothes to generous tuition assistance, the larger “family” is caring for the smaller domestic one.

Currently a fourth grader, Nolan piloted a new technology at Holy Family School. When Nolan’s parents met with Holy Family administrators last summer, they were strongly contemplating removing him from school so to prepare him for upcoming surgery. 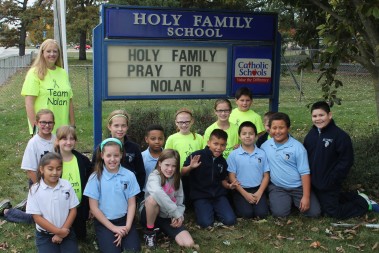 But Principal Joseph Miller and Jennifer Veldman, the assistant principal, asked, “What can we do?” Why not use technology to keep Nolan with his classmates? They and the Dobrucki family wanted to help Nolan continue the path of his education.

Using the Internet and Facetime on iPads, he was able to “be present” with his class and stay connected to his academic studies. Veldman organized it so each day a different student would be Nolan’s virtual buddy. The buddy would then be responsible for placing the iPad on their desk, learning and working with him in small groups and switching subjects with him. Through the iPad, Nolan went from class to class with his friends.

“The ownership of it by the students in the classroom was the most beautiful part!”  Veldman said with a smile.

“I was uncertain at first how it would work, but the children loved it,” Judy King, his fourth-grade teacher explained. “They felt so special when it was their turn. They haven’t seen him in class this year, but knew him. It was not disruptive at all. … He was a part of our learning. … I could even call on him! And students loved it when they could interact together during the day.”

As a result, Nolan was connected to his school community during what could have been a very isolating, lonely time.

“One day I popped into the fourth grade and saw they were doing group work. It was just awesome to see two kids and an iPad with Nolan sitting at one table working together,” said Principal Miller. 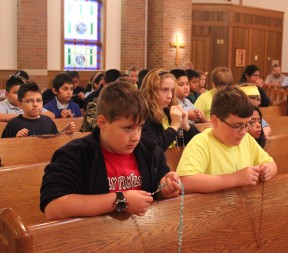 Holy Family students pray the rosary for Nolan Dobrucki before his bone marrow transplant in October.

And it was not just Nolan who benefitted, Miller continued, “I think the experience has helped all of our students to develop a sense of compassion and solidarity. Nolan’s friends love him, and they miss him, and they pray for him everyday.”

Teachers at Riley Hospital now work with him, still using modern technology of scanners and computers to connect him with Holy Family School. “We really miss him,” King said. “Our goal is to keep him on grade level, for when he can return to the building.”

During this tough recovery period, his classmates “take it in stride, pray for him and each holiday make something to send with his sister, for when they visit. Everyone is praying and extremely hopeful,” Veldman said.

“The spiritual support for Nolan has been very special for the school community,” said Miller. “When Nolan was going to Riley for the surgery, the whole school gathered to pray the rosary for him. From preschool to eighth graders, we prayed together for healing and recovery of our friend and classmate. It was very powerful.”

Caring for the Dobrucki family in material, physical ways, Holy Family hosted some fundraisers, such as dress down days. Also, last March, they sponsored an official “Be the Match,” bone marrow registration fundraiser. This connected the school family with the larger global family as Nolan and other recipients looked for a “10/10 match” for bone marrow donation. Selling neon green T-shirts, which read “Team Nolan,” the school raised money for the Dobrucki family, all of which they chose to give to the “Be the Match” foundation, a not-for-profit organization.

These are now the recovery days. His father, Shannon, has taken a leave of absence from work to stay with him at the Ronald McDonald House, while his mother Amy works in South Bend and stays with Mya at the family home commuting to Indianapolis on the weekends. The Dobruckis are dedicated and “optimistic about Nolan’s kidneys and his recovery.”

As Nolan continues to fight, this has been a journey of the unknown. “We take it one day at a time,” says Dobrucki. One day at a time, with a whole school community behind them.