Middle school is possibly the most difficult age of childhood development, bringing changes and struggles in all areas of preteen life. Jennifer Grindle remembers these difficulties, which is what led her to become a middle school teacher. This is Grindle’s third year teaching middle school math and seventh grade religion at St. Michael School in Plymouth.

Grindle took the experience to heart in her role as a teacher and mentor, particularly in the Catholic school setting. She sees herself as “that calming person” in the middle of the storms life sometimes brings to her students, particularly this year. Beyond teaching math equations, and the Catholic faith, she tries to help them manage the emotional challenges they face on a day-to-day basis. “Supporting the students mentally and developing their emotional side is for sure my favorite part about teaching.” 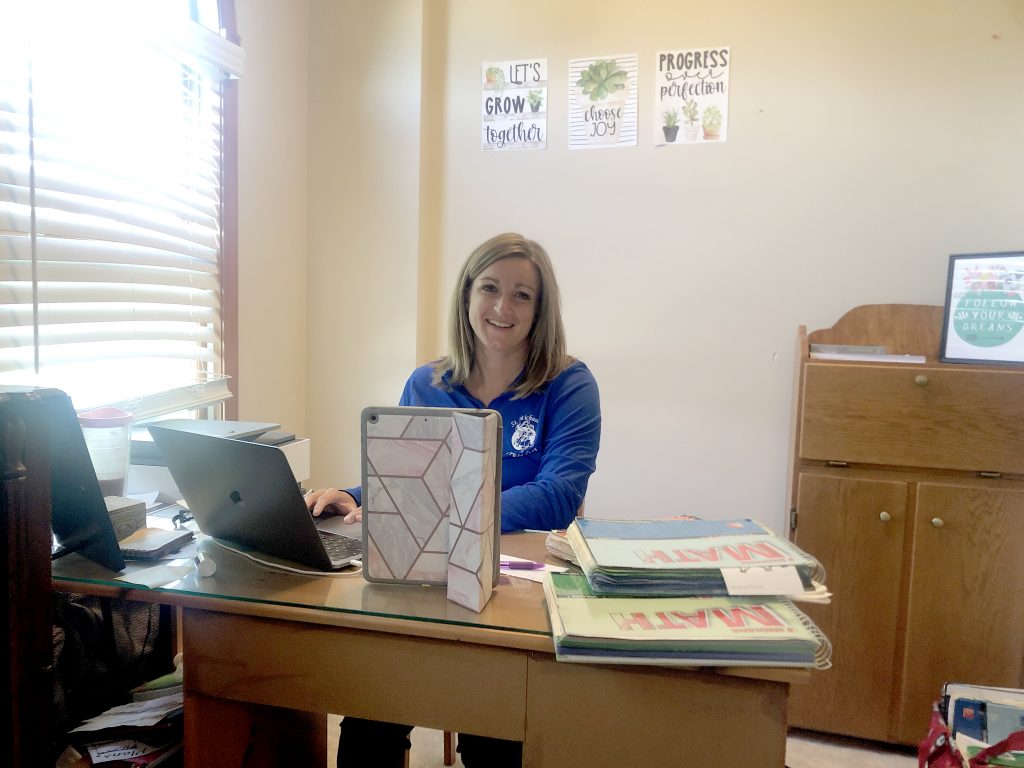 Photos provided by Jennifer Grindle
Jennifer Grindle teaches math and religion to middle schoolers at St. Michael School, Plymouth. This fall she shared many of the students’ lessons with them virtually, from her home, due to the pandemic.

Since math tends to be a subject dreaded by many students, her goal is to keep things “fun and positive.” That put her in a predicament earlier in the school year when Grindle made the difficult decision to teach virtually for the first month or so. One of her three children is at high risk for COVID-19, so she worked with the principal and other staff to allow her to work from home for a time.

In making the decision her greatest worry was potential backlash from the community of parents and staff. She soon learned that those fears were unfounded.

“All I got was outpouring support” both from parents and other teachers, both of whom understood her reasoning. 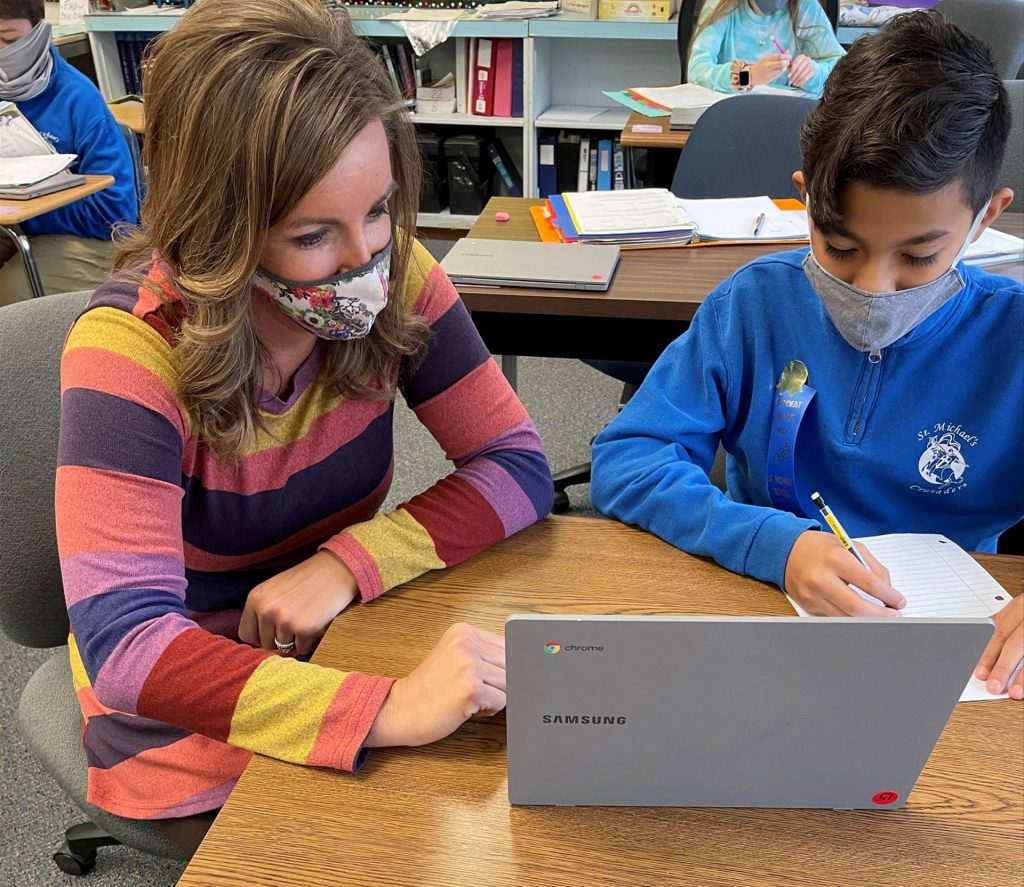 In the classroom, Grindle helps a students with math questions. Grindle has been teaching at St. Michael for three years and embraces her mentorship role.

That month she kept a busy schedule, ensuring she was not leaving her work undone. Early mornings and afternoons were spent helping her first grade twins and third grader with their own schoolwork. The rest of the day – minus lunchtime – she was logged on virtually to teach her class. Evenings found Grindle in her classroom, collecting papers to grade and preparing student binders for the next day. She spent Sundays at school also, listening to music while making copies of the week’s work and getting lessons ready.

Throughout that time, she found herself amazed by the hard work and adaptability of her students. “I think we forget how resilient our youth is,” Grindle remarked. “And watching the students persevere through the different situations and the support they have shown me has been really neat. I don’t know that you would see that everywhere.”

Once her son was medically cleared to return to school, she was grateful to reenter the classroom. She views her situation as a teaching opportunity in itself. Through conversations with her students, she emphasized to them that “there’s nothing God’s going to hand us that we can’t get through together.”

That has certainly been the case at St. Michael, where two other teachers, both members of the intervention team, agreed to be present in the classroom to make it possible for her to teach virtually. They collected papers, handed out assignments and observed the students at work. This was beneficial also because one is a resource teacher and the other is an English language learner teacher, so they were able to observe students’ needs and habits.

Prior to coming to St. Michael, Grindle worked at a public high school and middle school. For her to now be able to incorporate the Catholic faith into her classroom is a blessing. 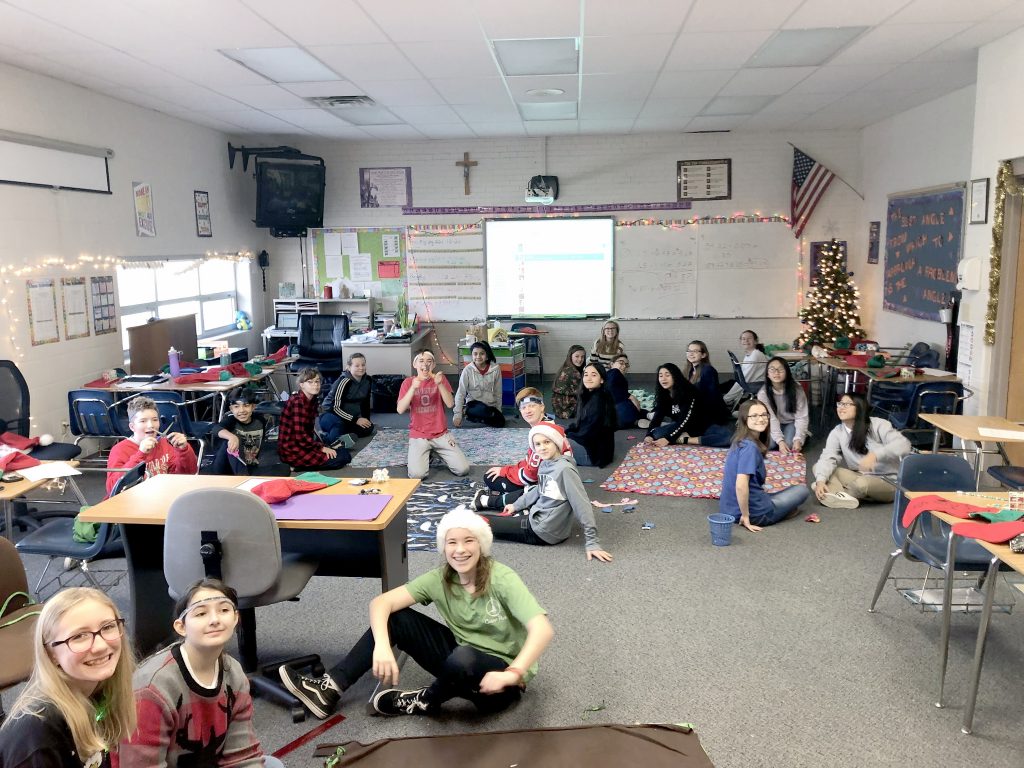 Since most of the students at St. Michael will move into public high schools after graduation, she believes it is vital to lay a strong foundation of faith before they make that transition. She stated that “being able to make those kids comfortable with their faith and understand it’s something to be proud of, not something that they should be ashamed of, I think that’s one of my biggest things.

“Just reiterating to them, when people question you about your faith, that’s OK, that’s a time to be able to express the importance of it, to teach others and to share the faith.”

This year, she included a Scripture writing exercise in class that helps students delve into Bible passages and find areas that stand out to each one personally. It has been interesting for Grindle to see what words or phrases have meaning to different students.

Though her post-graduation plans did not initially include working at her former grade school, when the opportunity to be in the same building as her children came up, she made the switch. What struck her most about coming to a Catholic school was the feeling of peace at the school.

“Our principal said to me when I applied that St. Michael’s has a sense of peace in our building, and that was very true. I didn’t totally understand what she meant, but it was enticing to me.”

Throughout her years of teaching, Grindle has found fulfilment in watching her students grow and thrive. One of her students this year made great strides in maturity and work ethic from last year, for example. She was also privileged to be a confirmation sponsor two years ago for a student.

Her efforts to mentor young students earned her the Christ the Teacher award for St. Michael School this year. Learning that she had won the award came as a surprise to her, though she was pleased the staff recognized the hard work she put into her classwork, even when she could not be physically present.

“I couldn’t do it without the support staff, from administration to the other teachers who helped me. The other thing is the quality of character in our students — I don’t think I could have done the virtual thing in every building.”