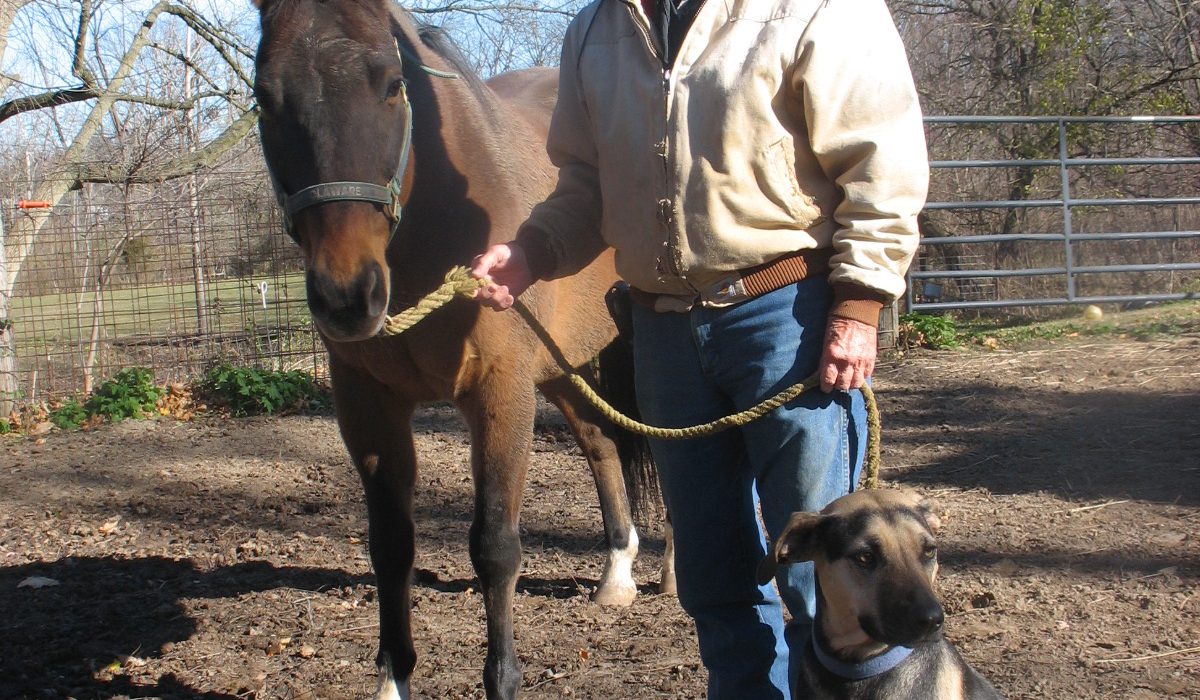 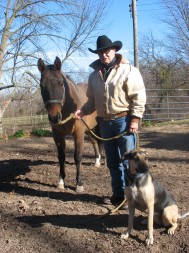 Dave Romary has kept his current 16-year-old cow horse, Monkey Dey Lena, behind his Fort Wayne home for about 10 years. “I call him Monkey because he’s always ‘monkeying around,’” he said, “but Monkey is a good cutting horse.” Romary also owns a Black Mouth Cur, a rugged herding, hunting and cattle dog from Texas, named Lu.

FORT WAYNE — Meet Don David Romary, who many say is “one of the best horsemen in the State of Indiana.” And although he is now 82, friends, acquaintances and even strangers — often their sons and daughters — call on him for advice or to demonstrate how to handle and train a horse, especially for cutting.

Cutting is a sport born of necessity and dating back to a time when ranchers in the American West hired cowboys to work and sort through herds of cattle out on the open range, separating those in need of branding or doctoring, Romary explained.

A native of Fort Wayne, he attended Cathedral Grade School, nearby Central Catholic High School for one year and graduated from Central High School across the street from CCHS.

Two things occupied his dreams in elementary school: singing and horses. He began singing and soloing in the Cathedral Boy Choir. And from that time on until earlier this century, he continued to sing, not only in his high school choir and for countless weddings, liturgical functions and other special events, but with three professional light operettas at the newly built Foellinger Theatre in Franke Park and with the Fort Wayne Philharmonic Chorus. “Often, I would sing for two or three weddings on a weekend, including the rehearsals,” he said. Romary now uses his vocal talents serving as a proclaimer of the Word at St. John the Baptist Parish, Fort Wayne.

When he was growing up on Liberty Street, there was a girl named Margie who moved from a farm into the neighborhood and had a pony. He used to visit her quite often and usually rode the pony. One day she asked him, “Dave, do like me or my pony?”  “I realized I had to be careful how I answered her question, so I just said, ‘Margie, don’t ever sell your pony!’” When he was in sixth or seventh grade, he saved enough money from his paper route to buy his own horse, a long yearling colt he initially kept in the garage until he could board it at Franke Park — ironically, where Foellinger Theatre would be built in 1949. Romary said he broke the horse named Toots in the old Wayne Pump parking lot, which was covered with stones, but he never was thrown off. Romary added that he and his young school friends would ride together and went to area horse shows where they rode the broncos and bulls.

“I didn’t date much in high school because I was too busy with my horses and working odd jobs to be able to keep them,” he said. But during his junior year he met Joan, the class secretary at Central High School, who said she often walked her dog, Goldie, in nearby Franke Park, where Romary not only kept his horses but ran the livery stable. He told Joan he hadn’t noticed her but about the next night he did spot her, he said, and soon they began dating regularly. Romary attributes Toots with helping Joan’s initial attraction to him. “I would touch the horses’ withers at the base of her neck and ask, ‘Do you like Joan?’ And Toots would shake her head up and down. But when I asked Toots if she liked me I would rub her neck on the side and she would shake her head sideways. Joan got the biggest kick out of that.”

They were married at St. Patrick Church in 1953, two years after graduating from high school. They raised six children: Richard, now residing in Churubusco; Joseph, living in Fort Wayne; Kenneth, deceased; Philip, who lives next door to Dave in southwest Fort Wayne; Rebecca Pape and Lizette Downy, both in Fort Wayne. There are 15 grandchildren.

Four years ago, on Oct. 4, 2011, Joan died of cancer. When a good friend of Romary’s learned of her illness, he gave him a booklet titled: “The Divine Mercy Message and Devotion” containing selected prayers from the “Diary of St. Maria Faustina Kowalska.” Romary recited the chaplet prayers with Joan at her hospice bedside throughout her suffering and has continued his daily devotion to St. Faustina since Joan’s death.

Shortly after graduating from high school Romary began working at Indiana and Michigan Electric Company (I&M), now Indiana Michigan Power. Initially he served as a ground man, drove a truck and enrolled in line school. While at I&M, Romary also sold life insurance to his fellow workers and stabled saddle horses at both Franke Park and Robison Park, providing rides for both I&M employees and the public. Eventually, he worked his way into sales and marketing out of the Decatur office before retiring with 43 years of utility service. In retirement, he spent another 18 years working full time on an area ranch where he did everything from breaking and tending horses to building corrals, installing lighting, plumbing, watering, cleaning cow barns and feeding. “It really kept me in shape,” he added.

Throughout his life Romary has been an active cowboy, traveling to shows and riding events in Texas, Florida, Alabama, Colorado and Wyoming, to name but a few states. His house contains many horse pictures and a few prized trophies, including a favorite from the Ohio National Cutting Horse Association.

Before dawn Romary, with his dog Lu, is up cleaning out the horse stall — sometimes twice a day — watering, pitching hay and until a few weeks ago splitting wood to burn in the house. Recently, he had two heat pumps installed and now Romary’s not using as much kindling. “I felt better when I was splitting that wood,” he quipped.