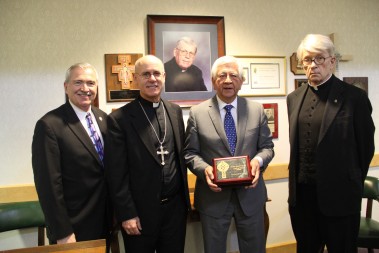 Click here for more photos from the award ceremony.

FORT WAYNE — Fort Wayne city dignitaries, educational administrators, family and friends were on hand to celebrate as Bishop Kevin C. Rhoades presented Steve Corona with the 2015 Father Tom O’Connor Light of Christ Award, honoring him for Servant Leadership, during a special awards ceremony at St. Mary Mother of God Church on April 8. He is the ninth recipient of the prestigious award that was inaugurated in 2007.

During his remarks Bishop Rhoades spoke of Pope Francis’ encouragement to be friend to the poor. “Steve is a great witness to that message,” said the bishop. Bishop Rhoades expressed his appreciation to Corona for his faithful service as member of several distinguished boards as well as his service to the Latino community, a people near and dear to the bishop’s heart. He thanked Corona for bringing the light of Christ to those he served and said, “I am deeply grateful to you for living the Gospel, for living your faith, your own personal encounter with Christ.”

When asked how he felt about receiving the award, Corona simply said, “Humbled.” This conscientious business and family man recalled years ago when coming to Fort Wayne in 1972 he became acquainted with Father Tom O’Connor and his service to God’s people as a member of St. Mary’s Church. The good priest’s example inspired Corona who has passed this service legacy to his children, two of whom are following in their father’s footsteps with community service.

A family contingent was present to celebrate with Corona including his wife of 37 years, Colleen, his mother Rose, brother Father Andrew Corona, priest in the Diocese of Gary, and three of Corona’s four children, with one son’s surprise arrival bringing tears to his father’s eyes. Corona and his wife have six grandchildren.

Corona is a native of Gary, Indiana, and a graduate of Indiana University. He retired in 2012 as president and CEO of JobWorks, and the following year he created Latinos Count, a not-for-profit group that works with South Side High School’s Latino students to prepare them with the necessary skills to be leaders in a global environment.

Corona was appointed to the Fort Wayne Community Schools board of trustees by then Mayor Win Moses in 1981 and has the distinction of having the longest tenure of service in the school district’s history.

Corona, a member of St. Peter Parish in Fort Wayne, also serves as the treasurer of national Hispanic Council of School Board members, affiliated with the National School Boards Association. He is a trustee for the University of Saint Francis and is a member of the Redevelopment Commission of the City of Fort Wayne. Corona is involved with the Community Harvest Food Bank as well.

The Father Tom Light of Christ award is presented annually to persons of faith whose life and work reflect the values of Father O’Connor, who served as pastor of St. Mary’s from 1970 until his death on St. Patrick’s Day, 2004. The Father Tom O’Connor Light of Christ Award includes a monetary gift given in the recipient’s name to a project or not-for- profit organization of the recipient’s choosing.