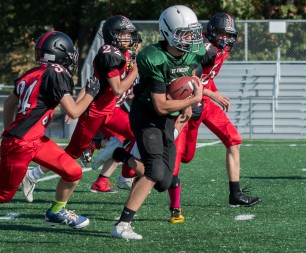 Carson Podschlne of St. Vincent runs for a touchdown in second-game CYO tournament play against the Knights. The St. Vincent Panthers won 30-6.

Central Catholic had an identical record as the CYO Knights at 1-5, but a tiebreaker based on points scored this season dropped the Irish to the No. 4 slot. Irish coach Keith Douge had his team up for the task, as they started with as much enthusiasm as any team this season. Central Catholic kicked off and immediately played some tight defense, blanking the mighty St. Charles offense through the first half of quarter No. 1. St. Charles, however, was not to be denied and continued a steady march down the field. With 3:44 left to go in the first quarter, Amir Drew scored on a 16-yard run. The points-after kick hit the goal post and St. Charles went up 6-0. What appeared to be an onside kick was recovered by St. Charles on the CC 46-yard line. A long pass from St. Charles’ quarterback Brenden Lytle to Callen Stauffer brought the Cardinals to a 1st and goal position. Lytle called his own number on the run and St. Charles scored again- with 3:24 left on the first-period clock. An extra-points kick on the mark brought St. Charles to an early 14-0 lead. The teams exchanged possessions and the first quarter came to an end.

St. Charles scored again early in the second quarter, when Brenden Lytle executed a “keeper” of 50 yards to the end zone. The extra-points kick gave the Cardinals a commanding 22-0 lead. The Cardinals had the Knights back on their heels, and the early Central Catholic enthusiasm and momentum had swung entirely onto the Cardinals side of the scoreboard. One more running play and good kick with 2:28 left on the clock gave St. Charles the 30-0 halftime advantage. 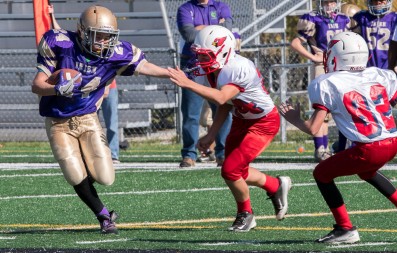 Louie Tippmann of Central Catholic runs for a touchdown against St. Charles during first-grame CYO tournament action on Sunday.

During the second-half break Central Catholic regrouped and received the kickoff. After an unsuccessful, surprise fourth down fake punt by the Irish, St. Charles started to mount a drive. Central Catholic made an impressive defensive stop deep in the Irish territory, at the 18-yard line. The ball was turned over to CC, which ran a running play and fumbled. A St. Charles recovery gave the Cardinals possession as the third quarter expired. Central Catholic did score in the fourth quarter, with a 50-yard pass play to Louie Tippmann. It must be noted that this was only the second TD given up by St. Charles in the entire regular season and the playoffs combined. As the game clock ran out, St. Charles advanced with a 30-6 victory.

In 2 p.m., second-game action, the No. 2-seed St. Vincent Panthers (with 13 players and 2 key injuries) was pitted against the No. 3-seed CYO Knights.

After the CYO Knights’ first victory last week, coach Jim Carroll had these comments: “The Knights have shown steady growth and development this season as young men working towards becoming great football players. Nobody has quit, we have a bunch of new players to football and a lot of seventh graders contributing as well. Despite the challenges of very sound, competitive, tough opponents each week and far distance travel to practices at St. Elizabeth field for a few, I am very pleased with these 2016 Knights — their effort, toughness and increased growth as young men — all coming together to form one heartbeat. They have shared the inner bond, goals, friendships and memories only the great game of football and the CYO provide. I’m sure in time they’ll even miss those Sunday morning butterflies.” 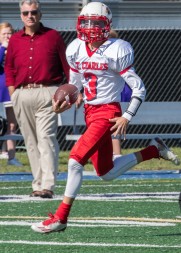 The match-up featured a full first quarter-long drive by the CYO Knights and their quarterback Brody Glenn. They took the kickoff and mounted a tremendous drive methodically down the field to the St. Vincent  “1-inch” line. Henry Verslype took it in with only three seconds off the second-period clock. The points-after kick was unsuccessful, and at 7:57 the Knights held a 6-0 lead. St. Vincent managed its own impressive long drive, and with 2:52 left in the half Ben Simcox punched in a 1-yard run. An extra-points kick was tacked on, and the momentum had been reversed 8-6 in favor of the Panthers. St. Vincent threatened one more time before the end of the half, but an impressive defensive stop by the Knights left the score at 8-6. 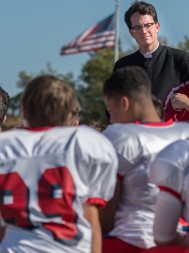 The game was up for grabs as the teams lined up for the second-half kickoff. The Knights kicked to St. Vincent, and the Panthers brought it back to their own 40-yard line. St. Vincent mounted a successful drive attempting to stretch out that 2-point lead. On a 3rd and goal situation St. Vincent elected to handoff to dependable Eli Hilger, who steamrolled into the Knights’ end zone at 2:48 of the third quarter. With Hilger’s run and a good extra-points kick the score was now 16-6 in favor of the 4-win, 2-loss St. Vincent Panthers. This proved to end all scoring in the third period. The 16-6 lead was too much to handle for the Knights in the final quarter. A 1st and goal running play by Panther’s quarterback Carson Podschlne at 7:32 of the fourth quarter brought the lead to 24-6, and the extra-points kick was good). Podschlne was not through for the day, however; with 1:51 to play he reeled off a 41-yard touchdown. Again, the extra-points kick split the uprights and the 32-6 victory belonged to the St. Vincent Panthers.

The CYO football tournament final takes place at 2 p.m. Sunday, Oct. 30 and features the St. Charles Cardinals vs. the St. Vincent Panthers at the University of Saint Francis. The fifth- and sixth-grade championship will be played at 12:30 p.m. 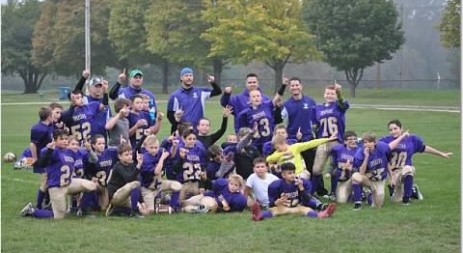