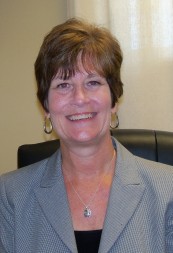 Recently named new principal of St. Thomas the Apostle School in Elkhart, Annette Mitchell has taught at the school for many years, and was formerly principal for eight years at Queen of Peace School, Mishawaka.

Mitchell received her bachelor’s and master’s degrees in Education at Indiana University, South Bend, and has been teaching on and off since graduating.

She and her husband Jim have been married 39 years and have been members of Queen of Peace Church in Mishawaka for 36 years. They have four grown children.

Mitchell’s teaching career began at St. Vincent de Paul in Elkhart. She started the school’s kindergarten program and then moved up with her class to first grade. After some years of raising her children Mitchell took a first-grade position at St. Joseph School in South Bend and then a fourth-grade teaching position at St. Thomas in Elkhart.

Now as principal, Mitchell has set her sights on the future of St. Thomas. “I would like St. Thomas to be a place where students learn to rely on God in their daily lives and (a place) where they are comforted, knowing He is always with them,” she said.

“I know parents want strong academics and I believe we are very strong academically, but I believe our job is to teach them ways to get to heaven,” Mitchell shared. “I hope that the staff — all of us — create an environment where everyone can ‘put on Christ’ on a daily basis so the students can see that and imitate that. Where instead of just teaching and saying it, we’re actively living it.”

St. Thomas is starting an elective program for its middle school grades this year so students each quarter can choose classes such as pottery, photography or guitar. “We’re hoping to provide something unique to add to their core classes,” she said.

The school is also adding a pre-school this year and is planning to offer Good Shepherd catechesis to the pre-school and kindergarten classes.

Mitchell is looking forward to the larger role she can play at the school. “I love kids and I love being in the classroom. I love the fact that as principal I can help guide their faith and education in their years here at St. Thomas.”

She believes Catholic education is important because of how it molds the whole person. “In every school we grow the future, but in Catholic schools we’re molding children to be faithful, responsible adults who care for each other and the world they live in to create a brighter future.”