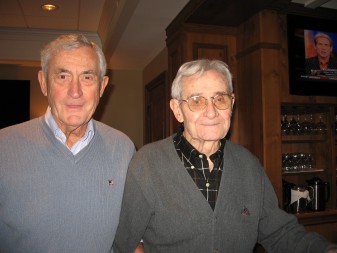 For two young lads who were graduated from Fort Wayne’s St. Patrick’s grade school in 1937, there was a lazy summer ahead and then the excitement of being together again in Catholic high school. Neither could know that their subsequent graduation would send them not to college but straight into the army and the opening chapter of World War II where they would have a dramatic reunion in the shadow of the bridge at Nijemgen as part of the infamous Operation Market Basket, dramatized in the movie, “A Bridge Too Far.”

World War II separated the close chums, although they still had something in common.  They were both in the U. S. Army and kept in touch by mail.

Both men belonged to units in the European theater, and as the war drew to a close, both were involved in the dangerous gamble to advance Allied forces into Germany at the Rhine River. Bob Heiny got there first. His outfit, the 656th Tank Destroyer outfit was the first to cross the Rhine. Sgt. Heiny knew from their correspondence that Bob Gorman was close by with the 203 Anti Aircraft, assigned to protect a pontoon bridge and the main bridge. Gorman was living in a bombed-out hotel and it was there that the two battle weary Hoosiers had a brandy-laced reunion matching the surrounding bombardment.

The St. Pat’s buddies survived the war without a scratch and resumed life together as roommates at Xavier University. Bob Heiny returned to the Heiny Grocery firm with his brothers and then the Sealtest Ice Cream company. Bob Gorman retired from General Electric … and their shared experience was to continue. 27 years ago, Gorman persuaded Heiny to join him as a volunteer two days a week at St. Mary’s Soup Kitchen.

And that’s where the present finds the two who served Mass at St. Patrick, who went through life, thick and thin, war and peace, now serving Christ by serving others.