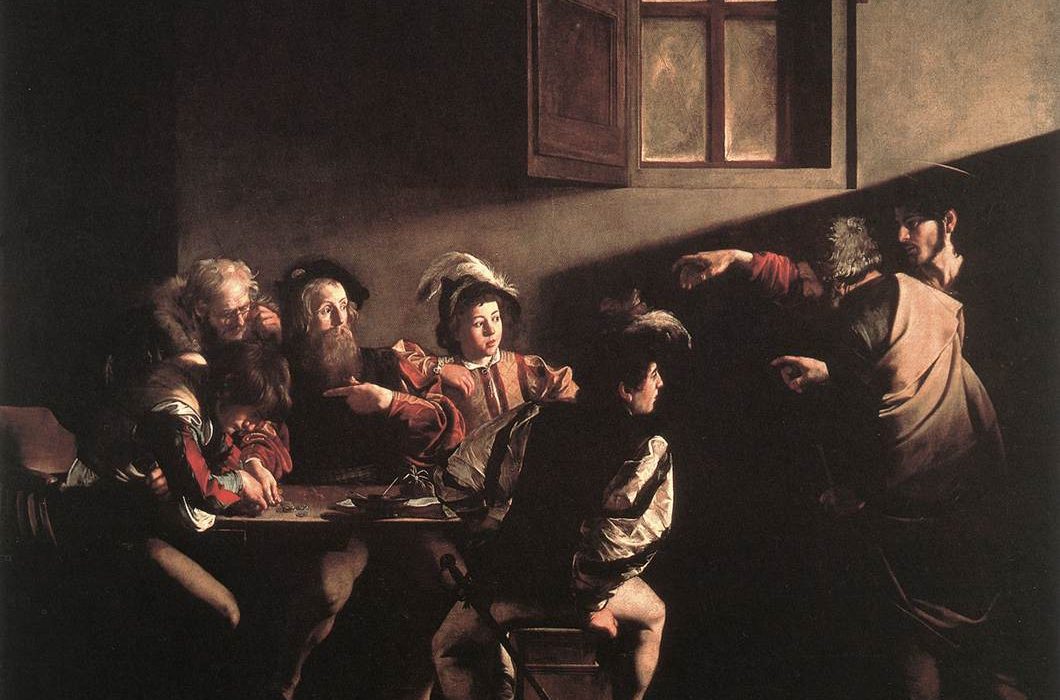 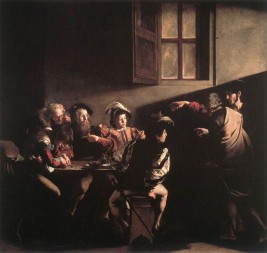 Michelangelo Merisi, known as Caravaggio, painted this piece of artwork depicting The Calling of St. Matthew. It was completed in 1599-1600 for the Contarelli Chapel in the church of the French congregation, San Luigi dei Francesi in Rome, where it remains today.

The apostle and evangelist, Saint Matthew, is the secondary patron of our diocese. His feast day is September 21st. Though his feast is not celebrated this year since it falls on a Sunday, it will be celebrated at Saint Matthew Cathedral since, as titular patron of our co-cathedral, it is observed as a Solemnity there according to liturgical law. I will be celebrating Confirmations at Saint Matthew’s on Sunday, confirming the young people on their patronal feast day.

I’ve been reflecting on the significance of our secondary patron. Matthew was one of the Twelve chosen by Jesus to preach the Gospel to the world. He did so not only orally, but also by writing. The tradition of the ancient Church attributes to him the authorship of the first Gospel. It was written to Christians of Jewish background.

In reflecting on our secondary patron himself, it is good to remember that he was a “publican,” that is, a tax collector. Tax collectors are often linked with sinners and prostitutes when mentioned in the Gospels. Jesus chose as one of the Twelve a man who was regarded as a public sinner. Matthew (also called Levi) was a collaborator with the Roman occupiers and their unjust and greedy treatment of the people of God. Tax collectors were also examples of being miserly and taking extra money from the people. Remember Zacchaeus, a chief tax collector, who became rich by defrauding people.

Pope Benedict XVI once said that Jesus’ choice of a tax collector to be an apostle demonstrates that Our Lord excludes no one from His friendship. Many were shocked that Jesus called Matthew to follow Him. They were further shocked when Jesus attended a large dinner that Matthew hosted in his house, a gathering that included other tax collectors and sinners in attendance. On that occasion, Jesus explained His rationale and mission: Those who are well have no need of a physician, but those who are sick; I came not to call the righteous, but sinners (Mark 2: 17).

The choice of Matthew reminds us of an important and fundamental truth of our faith. It is the good news of the Gospel: God offers His grace to sinners! He is rich in mercy!

Pope Francis’ motto as a bishop and now as the pope hearkens back to the calling of Matthew, the tax collector. His motto is miserando atque eligendo (having mercy and choosing). These words comes from a homily of Saint Bede on the calling of Matthew where he wrote that Jesus saw a publican, looking upon him with mercy and choosing him, said to him: “Follow me.” The Vatican issued a statement after Pope Francis’ election explaining his choice of this motto. It said:

“The Holy Father, Francis’ motto comes from a homily by the Venerable Bede, a priest, commenting on the Gospel passage of Saint Matthew’s call, where he writes Vidit ergo Iesus publicanum et quia miserando atque eligendo vidit, ait illi: ‘Sequere me’ (Jesus saw a publican, looking upon him with mercy and choosing him, said to him: ‘Follow me’).

The homily (of Saint Bede) is a tribute to Divine Mercy and can be found in the Liturgy of the Hours for Saint Matthew’s feast day. It takes on a special role in the spiritual life of the Pope. In fact, on the Feast of Saint Matthew, September 21, in the year 1953, the young Jorge Mario Bergoglio experienced, at the age of seventeen years, in a very special way, the loving presence of God in his life. Following a confession, he felt his heart touched and sensed the descent of the mercy of God, who with a look of tender love, called him to the religious life, following the example of Saint Ignatius of Loyola.

When chosen as a Bishop, Bishop Bergoglio recalled this moment of the beginning of his special consecration in the Church and decided to choose Saint Bede’s expression as his motto and programme for life: Miserando atque eligendo (He showed mercy and called him), which is now in the Papal Coat of Arms.”

When we think of our diocese’s secondary patron, we can be reminded of the Divine Mercy. Jesus looked upon Matthew the tax collector with great mercy and chose him to be an apostle. Pope Francis experienced this gaze of Jesus at the age of 17 and discovered his own vocation. God filled the young Jorge Bergoglio with His love on that day back in 1953, September 21, the feast of Saint Matthew. God touched his life and the future Pope found his vocation. Pope Francis says that on that day, he felt in a very special way “the loving presence of God in his life” and that God was gazing upon him “with a look of tender love.” He sensed the “descent of the mercy of God.” He felt what Saint Matthew felt when Jesus called him to be an apostle.

It is in prayer and in the sacrament of Penance that we too can experience God’s loving presence and the descent of His mercy. There is another tax collector whom we read about in the Gospel of Luke, the one who went up to the temple to pray, along with a Pharisee. This anonymous tax collector humbly trusted in divine mercy while the Pharisee boasted about his own perfection. The humble tax collector would not even lift up his eyes to heaven. He beat his breast and said: “God, be merciful to me a sinner.” Jesus said: “I tell you, this man went down to his house justified rather than the other; for every one who exalts himself will be humbled, but he who humbles himself will be exalted.”

Matthew got up from his station as a tax collector to follow Jesus. He became a great apostle and an evangelist. He teaches us God’s saving mercy. He gives us all hope. I invite you to pray the following prayer, the Collect from the Mass of the Feast of Saint Matthew, the secondary patron of our diocese:

O God, who with untold mercy were pleased to choose as an Apostle Saint Matthew, the tax collector, grant that, sustained by his example and intercession, we may merit to hold firm in following you. Through our Lord Jesus Christ, your Son, who lives and reigns with you in the unity of the Holy Spirit, one God, for ever and ever. Amen.