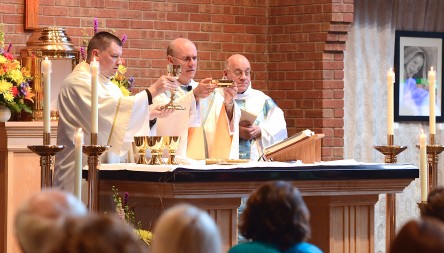 Bishop Kevin C. Rhoades celebrates the Eucharist at St. Mary of the Annunciation, Bristol, on June 20. Father Robert Van Kempen, pastor, is at right. Deacon Robert Garrow is at the left.

BRISTOL — The parishioners of St. Mary of the Annunciation Parish in Bristol took to heart the words of 1 Corinthians, “Let us go rejoicing to the house of the Lord,” as Bishop Kevin C. Rhoades dedicated the new altar and blessed new altar furnishings on Saturday, June 20.

“It is appropriate that we sang these same words,” said Bishop Rhoades in his homily, “since we too have come rejoicing to this house of the Lord for the dedication of this new altar. This church is the house of the Lord because here the Lord is present in the Blessed Sacrament. And in this church is contained the altar of the Lord, a sign of Christ who is the living altar of the heavenly temple. We who pray in this church, according to ancient writers, are the living stones from which the Lord Jesus builds the altar.”

Father Robert Van Kempen, pastor of St. Mary of the Annunciation, told Today’s Catholic, when he was assigned to the parish in 2004, he had hoped to replace the altar and altar furnishings.

“When I talked with Bryan Finkelstein, the music director at St. Mary’s at the time, he said he would be interested in making new furniture,” Father Van Kempen said. “With a new altar in mind, Brian MacMichael (director of the Office of Worship) and some from the Sacred Art and Architecture Committee came to St. Mary’s, and we discussed the plans for the new furniture. We talked about the new altar, tabernacle stand, ambo and chairs.”

Finkelstein created all the furniture but the chairs, which were constructed locally by an Amish craftsman. The carpeting in the sanctuary was also replaced with new flooring.

The altar is considered the center and focal point of every Catholic church, Bishop Rhoades explained.

Bishop Rhoades related in his homily, “From the earliest times, Christians erected permanent altars for the celebration of the memorial of the Lord, the mystery of the Eucharist. By its very nature, the altar is a table of sacrifice since on it the sacrifice of the cross is perpetuated in mystery throughout the ages until Christ comes again. It is also a banquet table, a table at which God’s children assemble to offer thanks to Him and to receive the holy Body and Blood of Christ. The altar thus has great dignity. It is the table of the Lord and it signifies Christ. It is dedicated to God.”

During the Rite of Dedication and Anointing, the Litany of Saints was sung. Bishop Rhoades then deposited a relic of St. Jude Thaddeus, Apostle of Jesus, in the altar stone. St. Jude is the patron saint of desperate situations and hospitals.

Parishioner Lu Downs, who manages the Love and Blessings Catholic gift shop in the church and famous for passing out over 50,000 pocket angels, gifted the relic to Father Van Kempen. Lu and her late-husband, Buddy, joined the Church in July of 2000. Shortly thereafter, they visited Rome with a friend from South Bend who was acquainted with an order of nuns that took care of relics. Years later, when Buddy became ill, the South Bend friend gave Buddy a relic of St. Jude with the paperwork declaring authenticity. After Buddy’s death, Lu gifted the relic to Father Van Kempen.

“I offered this (relic) to the church so the altar would have a first class relic,” Father Van Kempen said.

After placing the relic, Bishop Rhoades poured on the altar sacred Chrism, “the same oil that is used at Baptisms, Confirmations and Ordinations,” the bishop noted in his homily, and then anointed the altar top.

Bishop Rhoades explained in his homily, “This celebration is also a cause for joy for us since we too understand the meaning of the altar and its dignity and the abundant graces we receive from the great gift of the Eucharist celebrated on it.”

In the Gospel reading from the Sermon on the Mount, the bishop explained that Jesus taught the Jewish people that at worship they must leave their gift at the altar if they recall that a brother or sister has anything against them. They are to go and be reconciled, then come back to the temple to offer their gift.

“Today’s Gospel also reminds us of the importance of the sacrament of Reconciliation, necessary before receiving Holy Communion if we have committed a mortal sin,” he noted. “None of us should approach the altar of the Lord unless we are in the state of grace, reconciled with God and the Church, and thus properly disposed to receive the Holy Eucharist.”

After the Mass, Father Van Kempen called the dedication “a grand celebration. Music, prayer, tradition — it was truly a grand evening.” Nearly 250 people were present at the dedication and were invited to Annunciation Hall for food and friendship following the Mass.