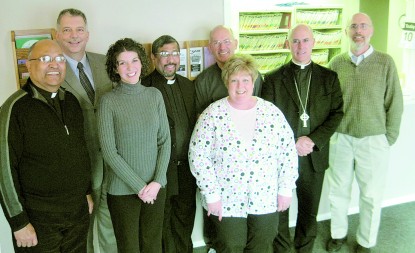 GARRETT — A true gem in terms of service to the needy in all of DeKalb County lies in the small northeastern Indiana town of Garrett. St. Martin’s Healthcare Clinic, Inc., which began operations in 2005, currently serves the medical and dental needs of more than 6,900 uninsured persons annually.

The idea for a clinic had its inception at St. Joseph Parish in Garrett where years earlier, a ministry to help those in need through St. Martin’s Soup Kitchen and Clothes Closet began. After several years, as those ministries providing food, gently-used clothing, personal hygiene and baby items continued and grew, it became apparent that there was a similar need to provide healthcare for the uninsured in the county as well.

Tammy Stafford, who has been the clinic’s director since it first opened, remembers then-pastor of St. Joseph’s, Father Tom Lombardi, as the “catalyst” in the effort. In January of 2005, Father Tom documented the need, then made calls, wrote letters and garnered support from local doctors, dentists and pharmacists. The response was overwhelming.

“We live in a really good community,” says Stafford, and Father Tom’s efforts were quick to bear fruit. The clinic formally opened its doors on Oct. 10, 2005, under Dr. Stan Greenberg as medical director.

What began modestly as a single medical examining room has grown in five years to a large medical and dental clinic which also offers patient assistance with prescriptions and advocacy services. And in 2008 St. Martin’s Health Care was able to purchase the building that houses them on South Randolph Street.
The clinic serves only the uninsured, those with no VA, medicare or medicaid benefits, says Stafford, but the need is well documented, with clinic visits burgeoning from 2,000 to nearly 7,000 annually since 2006.

A small amount of funding comes from the Annual Bishop’s Appeal and Stafford chuckles as she recalls her campaign to secure additional diocesan monies during Bishop Kevin C. Rhoades’ recent visit.

Upcoming clinic fundraising events include the popular Circle of Friends Tea, which is slated for Sunday, Feb. 20. It is a luncheon featuring table hostesses and sponsorships, which has become an annual sold-out event. The third annual Swingin’ for St. Martin’s Golf Outing will be held Saturday, Aug. 6, at the Garrett Country Club. Last year’s event raised over $10,000. And the biggest fundraiser of the year promises to be the Hog Roast and Benefit Auctions to be held Saturday, Sept. 17.

The clinic is open 30-35 hours a week with evening hours on Thursdays. It is primarily volunteer-based and depends on physicians, physician assistants, nurses, nurse practitioners, dentists, dental assistants and hygienists, pharmacists and many clerical and support personnel. Stafford puts the value of those volunteer hours at $400,000 annually.

In 2007 St. Martin’s Healthcare became incorporated and obtained nonprofit status. It has a 14-member board of directors whose chairman is Dr. Gary Davis of Emergency Physicians of Indiana and vice chairman is DeKalb County Judge Kevin Wallace. The current medical director is Dr. Bret Kueber.

Its mission statement says, “In order to fulfill Christ’s command to care for the sick and to uphold the sanctity of life from conception to natural death, it is the mission of St. Martin’s Healthcare, Inc. to offer quality healthcare to those individuals without the means to provide for themselves. In this, we strive to help maintain the physical, psychological, emotional and spiritual health of our community.”

“We’ve come a long way,” says director Stafford. Even if healthcare reform continues, she expects that the need will always be there and that the clinic will simply adjust to the need.