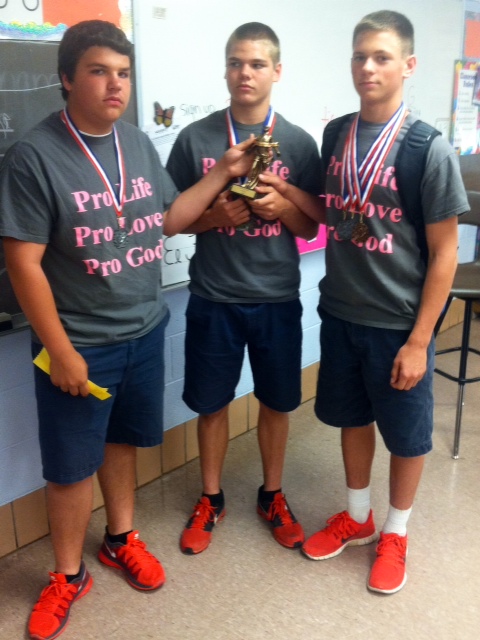 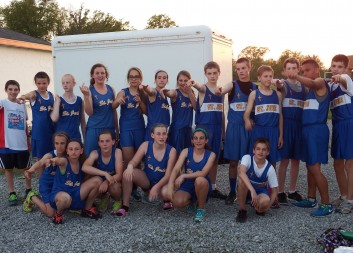 The St. Jude track squad is show after a successful 2014 season. The girls’ team was crowned champions at the CYO city meet and the boys’ squad finshed third.

FORT WAYNE — At the much-anticipated Catholic Youth Organization (CYO) track and field city meet, St. Jude edged out St. Charles, 108-101, to be crowned the girls’ team champions. St. Charles won the boys’ meet with St. Vincent placing second and St. Jude third. Held at Bishop Luers High School on May 21, the meet was the final 2014 showdown between the best of the best from the six CYO teams.

In the girls’ events, the winning Eagles dominated in the field events with Rachel Landstoffer winning the high jump and Olivia Ray claiming both the shot put and discus. Stephanie Newell was victorious in the 200-meter dash and was part of the winning relay team along with Allison Gerbers, Marcie Stoots and Samantha Weldon.

Coach Mary Palmer was very pleased with her squad this year, “We had excellent leadership from our junior high runners. They had a hard work ethic and really helped the younger girls learn about track.” 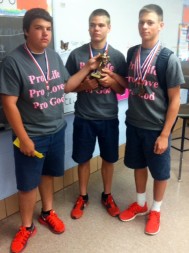 Three key athletes in the Cardinals winning formula this season were eighth-graders Adam Lightner, Isaac Blume and Bradley Black. Shown here holding the CYO team trophy, Lightner was also honored with the St. Charles Kettman Scholarship for his excellent leadership, determination and character in scholastic work and athletics. At the city meet, he placed in the shot put and discus and was part of the runner-up relay team.

For the boys, St. Vincent won both relays at the city meet and Panthers’ speedster Colin Stroud claimed individual medals in the sprints. St. Joseph-St. Elizabeth won the long jump thanks to a winning leap from Zack Wood and St. John the Baptist, Fort Wayne, claimed the hurdles title after the first-place effort from Paul Braun. St. Aloysius’ Will Schroeder came in first in the 400-meter dash and Emmett Delaney of St. Jude won the 1,600-meter run. The winning Cardinals got 10 points from Luke Besseson in the discus, Isaac Blume in the shot put and Patrick Finley in the high jump and the 800-meter run. Assistant coach Rita Sordelet summarized, “Our boys had a stellar season.”