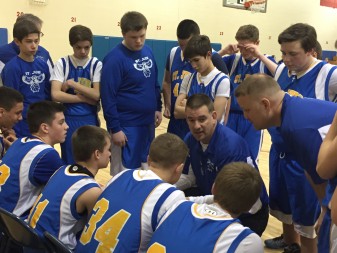 Dave Westendorf, a St. Jude Eagles’ coach for 20 years, shown during a pep talk with his St. Jude basketball team, is hanging up his whistle after chalking up 330 career wins with the Eagles.

FORT WAYNE — After responding to a request for a fifth grade boys’ basketball coach in the St. Jude bulletin, Dave Westendorf and his brother, Jerry, agreed to take the team for one year until a “real” coach could be found.

Although he had never coached before, Westendorf had played the game at Bishop Dwenger High School and his uncle (Larry Westendorf) was a successful coach at St. Charles Borromeo School and went on to a Hall of Fame career at the University of Saint Francis.

“I caught the bug,” Westendforf admits. But 20 years and 450 games later, Dave is hanging up his whistle after chalking up 330 career wins with the Eagles. The first 10 years, Westendorf’s children were too young to play, but the past 10 years, he was blessed to coach all three of his children.

Westendorf also credits his wife, Amy, with much of his success. “Amy was amazing,” he said. “She ran all the other things in our lives so I could coach.”

Westendorf also coached football at St. Jude for eight years, was part of the Central Catholic Football Formation Committee and served as head coach this past year for the newly formed squad.

“It was a really neat experience getting to work with the Central Catholic Alumni Association and honor the school that started Catholic football in Fort Wayne,” the long-time volunteer detailed.

Westendorf lists the eight CYO championship tournament experiences as his most memorable games. “The player introductions, National Anthem and overall ‘big stage’ atmosphere is so exciting for the players,” recalled Westendorf, who also served as athletic director the past five years at St. Jude before stepping down because of his increased day job commitments.

While game memories are special, Westendorf cherishes off-the-court moments most. “When it was just our team — practices goofs, locker room pep talks, thrills after victories and disappointments after defeats — that’s when you really develop a special bond,” he noted.

The mentor continued, “What I will miss the most is definitely the kids, the special people in the CYO and those I have coached with and against. Coaches have a special opportunity to get to know kids and interact with them in a special way, away from social pressures, schools problems and family concerns.”

He feels it is such an honor and privilege to see a former player compete at the high school level, be named to the honor role, make college choices or land a job at a local business. And he is especially proud of three of his prodigies (Kyle Hartman, Ryan Christman and Marcus Stepp) making their second straight post-season run with the Bishop Dwenger basketball team.