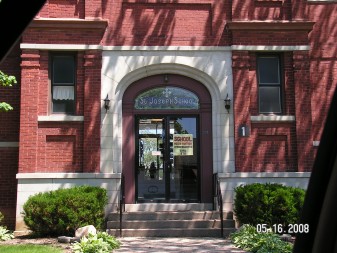 MONROEVILLE — One hundred years after opening its doors, St. Joseph Catholic School in Monroeville is planning a full year of celebration. The milestone will be marked with numerous events planned by a committee comprised of Pastor Father Lourdino Fernandes, Principal Carolyn Kirkendall and various members of the school staff, parents (past and present) and parish members.

Along with the development committee, they have been busy preparing ways to utilize the centenary celebrations to express their gratitude and to pay tribute to all the brave pioneers who came before them and have made the school what it is today. It is their hope that the year will be full of opportunities to celebrate 100 years of dedication, academic excellence, training men and women of character and of love being passed down to children from generation to generation.

Kirkendall, who has been at the helm for the past 27 years, is proud to have played a vital role in the school’s illustrious history. “It is neat to see my former students now in a parent role. They want what they received from SJS for their own children,” she said, adding, “It is exciting to be celebrating something so positive. One hundred years is a long time to be in our community. And it is even more exciting to be revitalizing after 100 years instead of dying off.”

A commencement thanksgiving Mass at St. Rose of Lima Church has been set for March 18, to kick off the birthday celebrations with a closing Mass slated for March 17, 2013. Both dates are near the feast day of the school’s patron, St. Joseph, on March 19. Other events in the works include bimonthly nostalgia days for alumni and an ongoing collection of donations to be permanently recognized on a “wall of fame.” 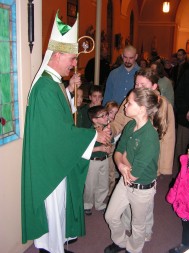 In the fall of 1912, St. Joseph School opened under the title of St. Rose Academy. It enrolled 27 girls and 42 boys that first term. Father Norbert Feldon was pastor of St. Rose of Lima Parish at the time and Dennis Fletter served as the original lay principal. Feldon helped to construct the first school with generous contributions from the early parishioners. The Sisters of St. Joseph, Convent of Milwaukee, Wis., taught in the school for 60 years before withdrawing in 1972.

The school was re-named St. Joseph School (SJS) after Father Charles Marr, who served as pastor from 1909-1922, sought the intercession of St. Joseph to help defray debt incurred by modernization and establishment of a commercial school. Over the last century, countless others have contributed blood, sweat and tears, along with their time, talent and treasure to ensure an excellent, quality Catholic education to all who have entered the doors of SJS.

The institution has responded to the changing times by updating many times and in many ways over the past 100 years to maintain its enviable reputation and rich legacy in the community and across the diocese.

The theme for the 12-months of activities is “The SJS Centenary: Celebrating the Past, Building for the Future.” While focusing on the achievements and past successes of SJS, the planning committee is also determined to look forward to a confident future ensuring all of their children have access to a high quality Catholic education for the next 100 years.

Considering that the current building is in need of substantial repairs and upgrading, a unique opportunity is being considered to purchase a facility in the community to build for the upcoming generations.

“The investment would be a most worthy centenary project,” firmly agreed Father Fernandes. The enrollment of the school has significantly increased from a year ago to 87 students. Kirkendall attributes the growth to the hard work and dedicated efforts of the marketing committee over the years.

“Their recruitment efforts have been focused on getting new students in our doors at the start of the educational career,” she said. SJS boasts a record-size kindergarten class from years past. Kirkendall also noted that the school added a few additional students in the upper grades thanks to both the newly implemented voucher system and 2010 closure of the nearby public elementary school. Father Fernandes has set a personal goal of 100 students for the upcoming school year during the 100th year celebration. 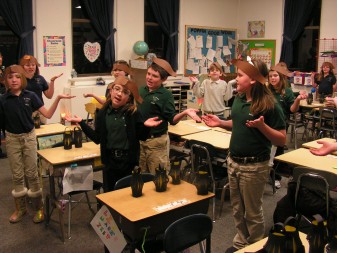 Students in the third- and fourth- grade classroom at St. Joseph School are shown doing a play for Bishop Kevin C. Rhoades during his first visit to their school last year.

When asked what she is looking forward to most about the upcoming year, Kirkendall quickly replied, “Retirement!”  Kirkendall will be passing on the torch at the end of the 2011-2012 school year.

Also, active in the planning for the upcoming festivities, the principal explained, “I feel it is an ideal time to go ahead with my plans to retire.”

Alumnus Joan Bultemeier, whose mother, children and now grandchildren have attended SJS, has been a teacher at the school for the past quarter century. She serves as a joint associate chair on the committee and marveled, “I have been amazed at the way our parish has rallied together to plan the celebration.”