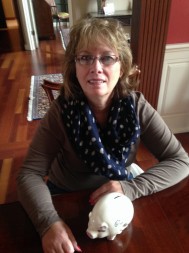 GOSHEN — April 11th marked the 50th anniversary of the infamous Palm Sunday tornadoes that tore through the Goshen area, leaving a path of devastation behind. Forty-nine people lost their lives and 600 homes were destroyed in Elkhart County.

Two of the hardest hit areas were the Midway Mobile Home Park and the Sunnyside subdivision in Dunlap — an unincorporated area between Goshen and Elkhart, and the Jefferson Place subdivision and Pine Creek Trailer Park north of Goshen on State Road 15 and U.S. Hwy 20 near Bristol and Middlebury.

St. John the Evangelist parishioners recently recalled memories of that fateful day. Parishioner Patrice (Eash) Traxler’s family home was destroyed in the tornado. Traxler was four years old at the time and recalled she and her sister Denise had been playing with a neighbor and had been sent home. She said Denise, who was six, was upset by the weather so their mother, who had been cleaning, tried to calm her. They soon were headed to a neighbor’s house because they didn’t have a basement. The next-door neighbor wasn’t home so they ran down the street, her mom carrying her baby brother, to the home where the girls had been playing.

Traxler said, “No sooner than we got there it got real black and nasty. As we headed to the basement we passed a big picture window and mom saw the tornado coming.”

Traxler recalls huddling in a corner and hearing the sounds of debris coming down around them. She said she wasn’t sure if it was the first or second tornado that hit her home. Reportedly, the first tornado struck between 6:15-6:30 p.m. hitting the Midway Mobile Home Park and Jefferson Place. Another tornado touched down near Wakarusa, skipped over Goshen Hospital and Goshen College and hit Sunnyside subdivision around 7 p.m.

She recalled that a young girl in their area had been killed. Traxler recalled that her home had one “bright orange wall standing” with a shelf where two piggybanks, hand-painted by her grandmother, sat unharmed. Another vivid image was that of the mop and bucket her mom had used before the tornado hit, standing completely undisturbed.

Traxler also shared that as her grandparents were driving home after the tornado her grandmother told her husband that their house had been hit because along the way she saw his ties hanging from tree branches.

Traxler said she credits her sister for saving their lives. It was also a blessing the first neighbors weren’t home as their house was destroyed as well. Traxler’s family rebuilt their house, this time with a basement and storm shelter.

Her father-in-law, Vince Traxler, longtime member of St. John, remembered driving home from Kendallville “with a terrible looking sky” and telling his wife if he saw a tornado he was going to drive into a ditch. But the family made it home and Vince said he didn’t know anything else until he showed up for work at Penn Controls the next day and no one was there. He said his wife Ruth knew of a family that was devastated in the tornado. Their son had only the clothes on his back, so Ruth took him shopping.

Vince also recalled his mother, who had heard news reports that Goshen was destroyed, grabbed a mop and bucket and drove up from Kendallville, not knowing what to expect. She was relieved to find her family was not affected.

Shirley Swartz recalls “such a nice day,” so she took her daughters to her parents’ home who lived near the Goshen Hospital, leaving her son home alone. After the tornado passed and the family was reunited at her parents’ house, they watched numerous ambulances bringing the injured to the hospital.

Pat Keil was working at the Dairy Queen that day and said, “Every time I put a cone out it got covered with dust and I couldn’t figure out why until I heard the sirens. It was a funny feeling — you could sense something in the air.”

Keil’s son-in-law, Chuck Cragun, who was 12 at the time, was right in the midst of the hardest hit area, near U.S. 33 and Country Road 13. He “very vividly” recalled his family going to the basement to escape the storm. “It felt like a sandstorm — all the basement windows had blown out and the house was shaken from its foundation,” he said.

The National Oceanic and Atmospheric Administration listed this tornado in the “Most Notable Storms in the 20th Century.”

St. John the Evangelist, Goshen, parishioner Patrice (Eash) Traxler still has the piggy bank that her grandmother painted for her that survived the destruction caused during the 1965 Palm Sunday tornadoes in the Goshen area.