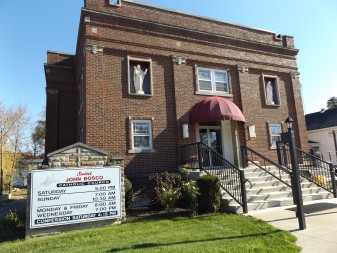 St. John Bosco Church stands on Main Street in Churubusco. This church building was once a United Methodist Church, so the parish added statues and Stations of the Cross to give it a Catholic identity.

St. John Bosco is not just a parish; it’s also integral to the city of Churubusco. It consists of about 250 close-knit households, according to long-time Administrative Assistant Diana Muehlfeld.

“St. John’s is a great parish. It’s a community — if it ever got shut down we’d not just lose a church, we’d be losing a family,” she said.

Muehlfeld said local groups frequently use the church basement. It has even been designated a safe place for children, in the event the local school has to be evacuated. A quilt club consisting of women from all over the community meets in the basement, and the Rotary Club holds regular meetings there.

History of the parish

In the 1950s, parishioners of the local “parent church” of Ege were scattered over such a wide, rural area that it became necessary to establish a new church. That church became St. John Bosco in Churubusco. Dedication ceremonies took place on April 13, 1958, in the former York Theater on Main Street, which had been transformed into a place of worship.

Father Anthony Reszutek, the pastor at the time, chose the name for the new church because of the similarity in sound to the town’s nickname of “Busco,” as well as for the heroic deeds of the saint himself. In July of 1970, Bishop Leo A. Pursley appointed Father Dennis Blank to dual pastorship of the Cathedral of the Immaculate Conception and the parish of St. John Bosco. By December of 1970, the first Parish Council and its committees had been formed. 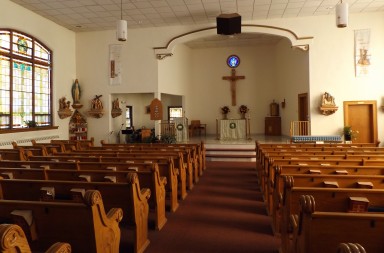 A view of the sanctuary and altar. The parish serves about 250 households.

After 13 years membership had grown from 65 members to around 445, and the facilities were no longer adequate. The Parish Council began the process of purchasing the church and rectory of the former Faith United Methodist Church at 220 Main St. Most of the redecoration was complete before the parish moved into the new facilities under the guidance of Father Blank, the first pastor to occupy the present rectory.

St. John Bosco has an active Altar Rosary Society that just held its annual Christmas bazaar Nov. 18-19, which included homemade noodles, baked goods and crafts. The money is used for funeral dinners, vestments and whatever is needed. Muehlfeld said there are a core group of 10-15 women who meet regularly, and additional volunteers show up when needed. There is also great support for funeral dinners, at which the Altar Rosary Society provides the main dishes and asks for donations of salads and desserts.

A men’s small group named SPARC — Small Parish Actively Receiving Christ — grew out of the Rekindle the Fire men’s retreat and meets every other week. About 15-20 men participate, and they attend every funeral in the parish to lead the rosary. Father Francis Chukwuma has attended a few meetings and said the men reflect on Scripture and discuss social justice issues, giving each person a chance to share. They also teach doctrine and pray together.

“They have fellowship together — socialize and fraternize and help support one another,” Father Chukwuma said. “It’s really made the men closer to God.” The group has gone to other parishes to help start SPARC groups.

A youth group was restarted with Father Chukwuma’s arrival and combined with youth from Immaculate Conception in Ege, since Father Chukwuma serves both parishes. Twenty-four people in the eighth grade and up attended the last meeting. Father Chukwuma has taken a team approach to leading the youth group, he said, instead of having just one person lead.

St. John’s doesn’t have a choir, but the director of music is Steve Palmer, who plays guitar at Mass and sometimes has others join him on organ and vocals. Donna Macino is the director of religious education, in which about 60 pre-school to eighth-grade children are involved. The preschoolers use the Good Shepherd program, which is based on the Montessori method. All the children recently were asked to fill out a pledge card listing two ways they hope to live out God’s call to mercy in the coming year, now that the Jubilee Year of Mercy has come to a close. Macino said they want the kids to realize, “Just because the year is over doesn’t mean God’s mercy is over.”

St. John Bosco also has a combined RCIA program with Immaculate Conception and the parishes do a Confirmation retreat together. There’s a Bible Study that meets every Monday morning after Mass. Aside from these and other ministries, several special events take place at St. John Bosco, including a spaghetti dinner and a beer, wine and cheese tasting. Any donations from those events go to support Catholic education and to support their parishioners who attend St. Mary’s School in Avilla.

Father Chukwuma returned to the U.S. from Rome shortly before being assigned to St. John Bosco. He shared his observations of the parish in his short time there.

“People are friendly — it’s a welcoming community — a family, as Diana said. After Mass, people stay around and visit. We need a bigger entrance!” he said.

He believes the parish has lots of potential, but there’s a definite need for more involvement in ministries — especially at the 7 a.m. Mass, when there’s a need for lectors and ushers. He said the church basement is also not handicapped-accessible, so they’re working on trying to install an elevator.

Father Chukwuma would also like to update the parish website so that it contains parish activities and is mobile-friendly. Being located on a highway makes the church easy to find, for travelers, but he’d like them to be able to see the Mass times and other activities.

Father Chukwuma said he’s glad to be at St. John Bosco. “It’s a good feeling when people are welcoming. When you meet good people it brings more of the good out in you. I believe (St. John’s) is going to grow even more — physically, in numbers, and spiritually. It has the potential.”