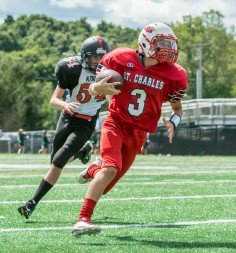 Sunday, Sept. 11, the St. Charles Cardinals rolled to a 38-0 victory over the CYO Knights, leaving little doubt that they again just might lay claim as the “team to beat” in seventh and eighth-grade action this fall. The Cardinals rolled to a 24-point half-time lead, but the CYO Knights fared better in the second half, holding St. Charles to single touchdowns in both the third and fourth quarters.

The victory extended St. Charles’ winning streak to 21 games. The team was led by Devon Tippmann, with over 100 all-purpose yards. Devon had three touchdowns in route to the victory. Other touchdowns came from Amir Drew, Sam Pesa and Troy Tippmann. The offensive line of St. Charles had a great performance as well. Eighth grader Joe Fabini anchored the center position, while linemen and eighth-grade classmates Brady Cochran, James Blume and Matthew Jimenez completed the blocking assignments, opening holes in the Knights’ defense as well as providing pass protection for their quarterback. Tippmann and Drew were in championship form, in allowing only one first down in the 32 minutes of play.

Knights Coach Jim Carroll acknowledged that he “wished the game could have been a little more entertaining.” But he pointed out some team positives in comments after the game.

“It was a tough welcome for our team and coaches in our opener — a lopsided loss to a disciplined and well-schooled St. Charles team. They are the top dogs. However, we Knights have an awesome group of young men. They are working very hard to make positive steps in their football development. A couple new players actually showed quite well in the game, including Henry Verslype, who played very aggressively. The right team attitude is there, as well as what it takes to ensure future Knight successes, despite the setback.”

Second-game action the same day saw an undermanned St. Vincent team score an impressive victory over the Central Catholic Irish, 18-0. St. Vincent scored all its points in the first half, before a scoreless second half of play for both teams. St. Vincent’s 15-man squad was cut to 14 with a player’s knee injury in the first quarter. Undaunted, the team made some good plays, including a “pick-6” with 15.7 seconds left on the clock in the first half.