College bowl games are an opportunity to extend the season and play just one more game in warm, sunny weather against good competition. Saint Joseph High School cooperated with that exact setting Sunday, Nov. 6, as the South Bend-area Inter-City Catholic League faced off against diocesan rivals from the Catholic Youth Organization of Fort Wayne on a magnificent day that saw temperatures hit the 70s.

Tailgating, which is prevalent within walking distance to the Notre Dame campus, took up a new home in the high school’s parking lot, as fans reflected on a season that brought kids together to work for common goals and form friendships that would last long after their helmets and shoulder pads were collected. 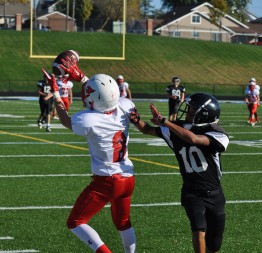 The St. Charles Cardinals brought their bravado on the long ride from Fort Wayne, having won all of their contests over the last three seasons; the Blazers of St. Matthew, meanwhile, still sported the glass slipper they adorned throughout the 2016 campaign, and hoped to topple the juggernauts.

The beasts from the East wanted to prove to their neighbors who would wear the crown. They started off with some hard sledding against the Black Swarm defense, picking up short yardage behind runs from backs Devon Tippman and Amir Drew and methodically moving the ball downfield.

On just the eighth play of the contest, quarterback Brenden Lytle hid the ball on his hip, and then on a naked bootleg bolted 26 yards, untouched, to the end zone. The points-after kick from Quinn Gillig was true, giving the Cardinals the early lead 8-0.

The Blazers’ first possession started off deep in their own territory and was short lived, as Matt Jimenez and his posse corralled the St. Matthew offense at the point of attack and turned the ball over on downs, still at the 22-yard line.

After a pitch and catch from Lytle to Sam Pesa left the pigskin nestled at the one, Tippman took the ball off tackle and walked into the end zone, that added with another Gillig kick, made it 16-0 with still two seconds left in the first quarter. 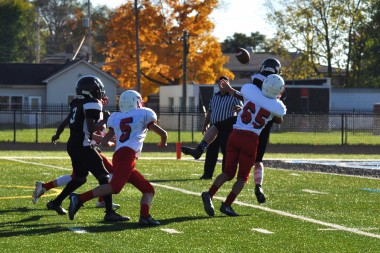 Matt Jimenez of St. Charles knocks Blazer Bryce Martens out of the game.

The Blazers were then in a bit of a pickle caused by the overwhelming presence that is St. Charles, but the resilient team did not falter. They mounted one of their own patented drives as the big three, running backs Joey Bartkowski, Isau Gonzalez and quarterback sensation Bryce Martens, juked and weaved over 18 plays down to the one of the Cardinals.

With just 21 ticks left before the half, Martens followed his blockers and squeezed into the end zone, capping the drive and laying doubt as to the outcome, 16-6.

The tale of St. Matthew’s magnificent season had been getting down early and then mounting miraculous comebacks in the second half. With that in mind, the Blazers had the Cardinals right where they wanted them. The only problem was that St. Charles was on the opposite side of the ball, and on the second play from scrimmage after intermission, Cardinal Lytle, playing safety, picked off an errant Martens pass, extinguishing the Blazer drive.

It only took three plays to dash the Blazers’ dreams: a screen to Callen Stauffer, a 20-yard dash by Tippmann and then, the icing on the cake, a sprint of 43 by Drew to push the score to 24-6.

The next series for the Blazers was the beginning of the end. Martens was hit hard by the relentless Cardinal defense making it his last play of his eighth grade season and giving St. Matthews limited options on offense.

After a quick four and out while running the wildcat formation, Henry O’Keefe bolted 19 yards to pay dirt, increasing the Cardinal lead to 30-6.

St. Matthews never gave up; but the remainder of the game was a back-and-forth battle, giving a little, taking a little, with the sole highlight coming on a huge 20-plus yard field goal by Gillig.

“They were pretty good. Our players had a lot of fight in them, but when Martens went down we had to go to our plan D,” remarked Blazer Coach Ben Domonkos. “I’m glad we got to play in this type of atmosphere, I’m so proud of our kids and what they accomplished this season.”

“We were impressed with the effort St. Matthew players had, their emergence is a good sign for Catholic football,” quipped Sam Talarico, long time skipper of St. Charles. “We have been undefeated for the past three years, but are players have been able to stay passionate week in and week out.”

“I like to credit our success to the big families that make up our team,” Talarico added, tongue-in-cheek. “In a big family you have to fight a little harder at the dinner table.”

In the consolation game, the Panthers of St. Anthony outlasted St. Vincent on a last-second field goal by Charlie Leonard. Panther teammate Brandon Prokop added a touchdown of 40 and the Falcons’ Luke Woenker tallied one in defeat.