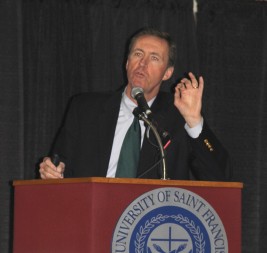 Chris Lowney, author of “Pope Francis: Why He Leads the Way He Does,” was the speaker at this year’s Servus Omnium Lecture hosted by the University of Saint Francis in the Performing Arts Center on the downtown campus.

FORT WAYNE— There is no arguing the fact that Pope Francis is a compelling leader, helping to revitalize the Catholic Church in tough times. “Leadership Lessons from Pope Francis” was the topic of the third installment of University of Saint Francis’ Servus Omnium Lecture Series with featured speaker Chris Lowney, author of “Pope Francis: Why He Leads the Way He Does.”

Lowney’s varied past seemingly makes him the ideal person to write this particular book. The current chair of the board of Catholic Health Initiatives, one of the nation’s largest healthcare/hospital systems, Lowney is a former Jesuit seminarian who also served as a managing director of J.P. Morgan. His first book, “Heroic Leadership,” was an international bestseller that has been translated into eleven languages.

Lowney immediately set the tone for his lecture by asking everyone to spend one minute thinking of a living person who they would describe as an effective leader, along with a few characteristics that they believed that leader had. The audience was then given a short time to discuss their thoughts with others, which not only got everyone personally invested in the lecture, but also helped define effective leadership.

Lowney next shared the results of a recent nationwide poll that showed just how much the country mistrusted its leaders. The poll showed extremely low approval and trust ratings across all types of leadership — political, educational, business, even religious. He did a quick and informal poll of the audience, which mimicked the nationwide study.

Lowney stressed that compared to 30 years ago, people are far less trustful of their leaders. He drew a correlation that today’s faster paced, more complex, constantly changing lifestyle contributes to this distrust. Today, a single person does not make decisions, as they have been made in the past. Leadership is no longer a single person, but has become a behavior. And, according to Lowney, forming new habits in leadership can change it. This led to the introduction of Pope Francis’ leadership style.

Lowney called out three specific examples Father Bergoglio demonstrated: Doing the laundry, dusty shoes and monastery bells. In each instance, Lowney not only explained the example in detail, but also made the case for real world uses, both in business and spiritually. In this way, Lowney went beyond merely describing the leader Pope Francis is to showcasing how anyone can be a better leader — whether at work, throughout the community, or in the home. He reminded the audience that everyone has responsibilities, which means everyone is a leader at some level. He also defined leadership as “pointing out a way, then influencing others toward it.”

An interesting point was made about the leadership choices Father Bergoglio made during his time at the seminary. Lowney stressed that none of the steps the future pope took were manipulative in nature. He was just behaving in a way he thought was appropriate. That, Lowney said, is the trait of a true leader. It is also part of what makes Pope Francis such compelling leader who has gained the trust and admiration of people around the world.