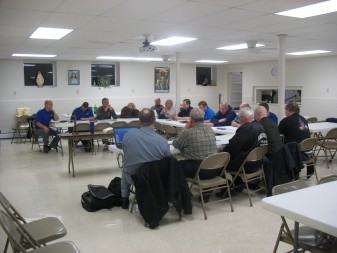 CHURUBUSCO — Sixteen men sat around four, eight-foot tables arranged in a U-shape in the basement of St. John Bosco Church in Churubusco on a Lenten Wednesday evening. Their idle conversations suddenly were interrupted by the sounds of the folding chairs scraping across the floor as all stood in silence for Bible enthronement.

Three men carried a crucifix, a lighted candle and a Bible to a place of reverence at the open end of the U. Another biweekly meeting was underway of SPARC (Small Parishes Actively Receiving Christ).

After listening or singing along with a recorded song, the SPARC chapter meeting in Churubusco continued with opening prayer, introductions and Scripture reflection. Following a short break for refreshments, the hour-and-a-half-long meeting resumed with catechesis, announcements and shared prayer.

“We’re trying to open up SPARC to other small parishes,” said Doug Fischer, outreach committee chairman for Rekindle The Fire (RTF) and SPARC. “We call it ‘A Meeting in a Box,’” he added, referring to getting the SPARC manual and other materials together to distribute to any parish that is interested. “Basically, if they follow the guidelines laid out in the manual, they could have a SPARC meeting/chapter started with relative ease.

“We are very much interested in spreading RTF and SPARC throughout the Diocese of Fort Wayne-South Bend and possibly beyond,” said Fischer, who also serves on the RTF central core team.

Nearly 1,100 men, primarily from the local diocese, attended a daylong Rekindle The Fire Men’s Conference on Feb. 9 in South Bend.

“RTF not only hosts the annual men’s conference, but they have a program for men’s meetings that is now hosted in seven parishes around the diocese,” Fischer continued. RTF meetings are geared for larger parishes, while SPARC is for smaller parishes, he explained. “SPARC has worked very well at St. John Bosco in bringing men closer to Christ. There is also a SPARC chapter in Kendallville (at Immaculate Conception Parish). We would like to spread it to any and all interested parishes throughout the diocese,” he emphasized.

“I am very happy to recognize and recommend the SPARC movement in our diocese,” said Bishop Kevin C. Rhoades. “This offshoot of the ‘Rekindle The Fire’ movement is an excellent opportunity for Catholic men to gather as brothers in Christ in prayer, study and fellowship.

“There is a great need for the invigoration of our faith and a rediscovery of the presence and love of Christ in our everyday lives,” Bishop Rhoades continued. “The SPARC movement helps men to experience anew the truth, beauty and power of our Catholic faith and to grow together in that faith.”

The history of the RTF/SPARC movement in the Churubusco area is quite recent. As men from neighboring parishes attended Christ Renews His Parish (CRHP) at St. Vincent de Paul Parish, Fort Wayne, they were left with a yearning to keep their fire for Christ burning, Fischer related. These men would return to their parishes only to feel their renewed fire for Christ slowly fading. And because these parishes were too small to generate something as inspiring as CRHP on their own, the men from St. John Bosco Parish began to attend RTF meetings at St. Vincent de Paul.

RTF saw a need for a New Evangelization through a men’s apostolate, said Fischer, which would help spread the love of Jesus Christ and the Catholic Church to the smaller parishes in the diocese. SPARC was conceived by the RTF central core team tailored to the needs and characteristics of smaller parishes. SPARC is a more condensed version of the RTF format but remains true to the basic concepts of what has made RTF so successful. Although SPARC and RTF are different in structure, they still share the same mission: “We are Catholic men who seek to rekindle the fire of Christ‘s love within us, and become better leaders, friends, husbands, fathers and sons; the men God calls us to be, through prayer, fellowship, faith and spiritual service to our family, parish and community.”

In early 2011, the men of St. John Bosco Parish, who were active members of RTF, were approached with this new idea. “When asked to be the first to implement SPARC at St. John Bosco, the men responded with an enthusiastic ‘Yes!’” said Fischer.

The first SPARC meeting convened in April 2011 at the parish. The men of RTF from St. Vincent de Paul brought a mission team to conduct the first few meetings. They were spent in fellowship discussing Scripture and expanding knowledge of the Catholic Church through catechesis. The original format envisioned for this group was adhered to but timelines and discussion periods eventually were finely tuned.

“SPARC was formed for men and by men who were set on fire for the Lord and His Church. Just as all fires need to be fed, so, too, does the fire for Christ. Through fellowship, Scripture, catechesis and shared prayer, SPARC feeds the fire for Christ that has been ignited within us,” explained Fischer.