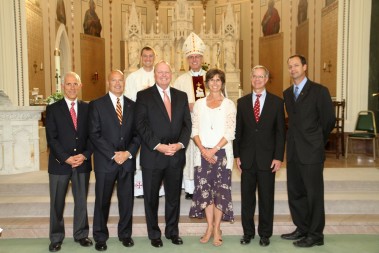 Legatus is an international organization of Catholic laity who are business and professional leaders, and their spouses. The Legatus mission is to assist members to dedicate themselves to studying, living and spreading the Catholic faith in their business, professional and personal lives.

Businessman Tom Monaghan was inspired to found the organization in 1987 just hours after meeting Pope John Paul II. Bishop Rhoades remarked that he was very pleased to have two chapters of Legatus chartered in the diocese within one year. Professional people are nominated for membership by their bishop or another Legatus member. New chapters may be established when there are at least 21 potential members in a diocese.

Members of Legatus chapters and their spouses meet monthly with a set program of praying the rosary, opportunity for Reconciliation, Mass, dinner and a speaker.

In his homily, Bishop Rhoades said that the readings for the day were very appropriate for the Legatus chartering. The first reading was a farewell discourse by St. Paul before he left the church at Ephesus. The Gospel was a farewell discourse by Jesus at the Last Supper. Both discourses warned of evil and hatred against the flock of Christ, and both invoked God’s protection against the Evil One who is at work in the world.

Bishop Rhoades noted that the Latin word “legatus” means legate or ambassador, and he observed that St. Paul called himself an ambassador for Christ. The spirituality of Legatus calls members to be ambassadors for Christ in the world, but not of the world, he continued.

John Paul II gave the examples of loss for respect of human life, the breakdown of marriage and family life, a crisis of truth and responsibility in human relationships, selfishness, sexual permissiveness and drug addiction.

However, Bishop Rhoades continued, John Paul II was not a pessimist, but rather “a man of hope” who reminded us that “the essence of our Christian vocation consists in being ‘light’ and ‘salt’ for the world we live in,” and he constantly encouraged the faithful not to be afraid.

John Paul II encouraged trust in the power of the Holy Spirit, the bishop continued, and he called the faithful to recognize the greatness of a Christian vocation.

“I think that is what Legatus is all about: It helps us to recognize the greatness of our Christian vocation as it helps its members to grow in the faith and to be ambassadors of the faith,” Bishop Rhoades concluded.

At the end of the Mass, Bishop Rhoades presided over an induction ceremony for the new members, who declared they would, “by the grace of God,” fulfill the charge given to Legatus by Pope John Paul II: “The world needs genuine witnesses to Christian ethics in the field of business, and the Church asks you to fulfill this role publicly and with perseverance.”