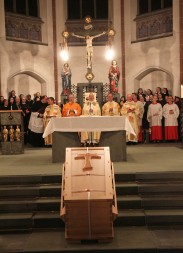 Archbishop Hans-Josef Becker of Paderborn, center, and other prelates, including Bishop Kevin C. Rhoades of Fort Wayne-South Bend, attend a ceremony for the reburial of the remains of Blessed Maria Theresia Bonzel in St. Martin’s Church in Olpe, Germany, Nov. 11. Blessed Maria Theresia (1830-1905) was the foundress of the Sisters of St. Francis of Perpetual Adoration.

PADERBORN, Germany — A Catholic nun who was born into a poor rural family and founded a religious order has been beatified in her native Germany more than a century after her death. Her impact is felt also in the Diocese of Fort Wayne-South Bend as the foundress of the Sisters of St. Francis of Perpetual Adoration in Mishawaka.

The beatification Mass on Nov. 10 was one of several activities that pilgrims from the diocese — including 47 Sisters of St. Francis of Perpetual Adoration, Bishop Kevin C. Rhoades, who concelebrated the beatification Mass, and three diocesan priests — took part in during the week.

Sister Angela Mellady, provincial of the Sisters of St. Francis in Mishawaka, told Today’s Catholic, “Shortly after our arrival (in Germany) at the motherhouse, we were taken to a room near the chapel where the casket of Mother Maria Theresia was placed until her remains were to be transferred to St. Martin Church in Olpe the Monday after the beatification. It was such a privilege to be able to go into this room and pray these days prior to the beatification.”

The pilgrims attended a prayer vigil in Paderborn on Saturday evening, Nov. 9, and returned the following day for the beatification.

“One of the most moving events was the unveiling of her picture in the sanctuary,” Sister Angela said. “The picture was directly behind where Bishop Rhoades was seated, which made it even more special.”

Sister Angela said of the beatification: “It was such a gift to be among so many other people who have such a devotion to Mother Maria Theresia — from all walks of life. Many of us learned about our foundress through books, and this experience of being present among her relatives, our sisters from throughout the world and the people of Olpe provided such an opportunity to know and love her even more.” 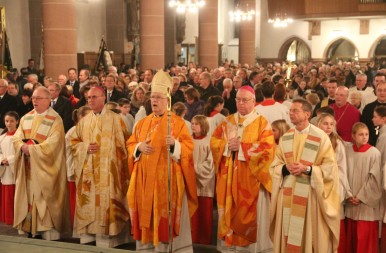 Sister Angela said many of the sisters commented that the celebration on Monday, Nov. 11, in Olpe was the most meaningful for them. It began with vespers in the motherhouse chapel. As part of the service the sisters joined a procession following an open bed fire truck escorting the body of Mother Maria Theresia to St. Martin Church where a special chapel has been constructed. Many people lined the streets. Pallbearers carrying candles surrounded the truck itself. After she was taken to this small chapel within the church, Mass began, using the new Mass parts for the first time.

“Sister Magdalena, the general superior, stated she had never seen so many people in St. Martin Church,” Sister Angela noted. “It was so powerful to witness how important this event is for all of Olpe — what a joy it is to share our love for Mother Maria Theresia with these people, and to witness how her life has impacted so many.”

Celebrations continued in Mishawaka when the sisters arrived back at the motherhouse and concluded their pilgrimage with Mass.

“The celebrant, Father Tim Alkire, from the Diocese of Lafayette, challenged us with three opportunities for sharing these experiences,” Sister Angela said. “Our first goal would be to foster devotion to our foundress and make her better known to others so they, too, may benefit from her life and spirituality.”

“Secondly,” she added, “to use this experience to deepen our own prayer life, particularly our love for the Eucharist.”

“And lastly,” Sister Angela said, “to imitate the life of Mother Maria Theresia, especially through imitating her life of poverty, simplicity and charity towards all.”