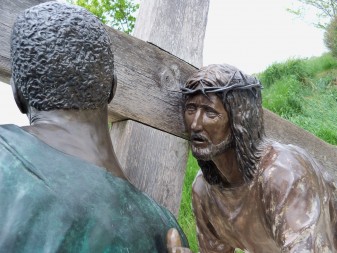 The emotions that the artist, Mickey Wells, designed into Christ’s face as he journeyed the Way of the Cross are depicted here as Jesus accepts Simon’s help carrying the cross. This Station of the Cross is located in the Shrine of Christ’s Passion, St. John, Ind.

ST. JOHN, Ind. — For pilgrims looking for an uplifting place to visit with their family this summer or for a peaceful spiritual retreat, a few hours’ drive northwest to St. John, Ind., will bring one to two beautiful places —The Shrine of Christ’s Passion and St. John the Evangelist Church.

The Shrine of Christ’s Passion opened in 2007 and consists of 40 life-size bronze figures depicting the way of the cross — from the Last Supper to the Resurrection. The shrine sits on 15 acres of property and 3,000 trees and bushes make up the half-mile prayer path that contains the stations.

The Stations of the Cross are set into alcoves intentionally so that when visiting one, the next is not visible. Eighty-eight semi-loads of rocks were brought in from Wisconsin to create the path. Mickey Wells is the bronze artist who constructed the figures and had people model as he designed the statues. The expressions portrayed on the statue’s faces and attention to detail creates a very real experience for visitors.

The shrine is nonprofit and non-denominational and was commissioned by the Schilling family to be built. According to a guide at the shrine when the Schillings first conceived of creating a Stations of the Cross prayer path they envisioned just having plaques with the stations. But following a visit to Amarillo, Texas, where another Shrine of Christ’s Passion is located and he saw Mickey Wells’s work Schilling returned knowing he wanted to create a similar experience.

Every aspect of the shrine was created to give visitors an authentic feeling of journeying with Christ along the way. The landscape design of shrubs and rocks is similar to that found in Jerusalem. Music plays softly along the prayer path, composed by two local men — one Christian, the other Jewish — to represent the time and place, and to set the mood.

From the beginning of the journey at the Last Supper visitors are invited to join Jesus and sit at the table with Him. Pilgrims are encouraged to get close to the figures of Christ and His followers, to touch the statues and to look into their eyes. The path itself is a peaceful place where guided tours are offered and encouraged for large groups, but individuals can also take a self-guided tour as there is a recorded story at each station. 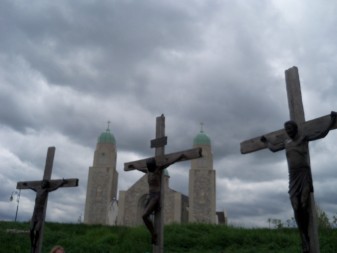 The Crucifixion of Christ is depicted here as part of the Shrine of Christ’s Passion in St. John, Ind. The towers of the new St. John the Evangelist Church are shown in the background.

The gates in the Garden of Gethsemane came from the old St. John cemetery and the donated red cedar wood of the crosses weigh 175 pounds each.

Located next to the shrine is the 40-foot tall statue of Our Lady of the Millennium, which faces U.S. Highway 41. Our Lady of the Millennium replaced the original Blessed Mother statue first built in 1954 by a local family dedicated to Mary. The original donor sent to Italy for Carrara marble to build the 20-foot statue with no intent of starting a shrine, but cars began stopping along the highway and it grew into a Marian shrine. The original statue was moved up the hill to the new St. John the Evangelist Church.

Although located close to the church and commissioned by parishioners, the shrine is not part of the church. It is privately owned and operated and is maintained solely by donations and proceeds from the large two story gift shop.

ST. JOHN, Ind. — Hours for a guided tour of St. John the Evangelist Church are more limited then the Shrine of Christ’s Passion, but it is worth the time to discover not only its beauty, but how so many of its designs and construction elements were incorporated to represent and teach the faith.

The parish is the oldest in the Gary diocese, originally built in 1837. The original log cabin church is now a Eucharistic Adoration Chapel. Two other church buildings were built before the present church, which was dedicated in May of 2008. 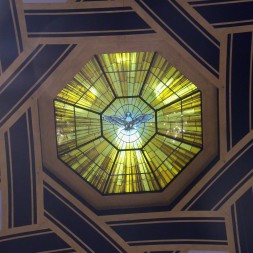 The property and the large rectory were donated by a local family. The Romanesque-style church building was constructed facing east, the direction traditionally symbolizing the second coming of Christ. The church has also always envisioned the risen, Glorified Christ as facing east when offering Eucharistic sacrifices. Parishioners were actively involved in all aspects of the construction of the church from fundraising to architectural design, as the architect of record is a parishioner, as well as construction aspects.

Visitors first enter the Garden of Angels with 10 pillars displaying Michael the Archangel on one end and Gabriel the Archangel of the Annunciation on the other, representing the parish’s devotion to Mary. In front of the church and facing the statue of Mary is a bronze statue of the patron saint, John the Evangelist, designed especially for the parish by Mickey Wells of Texas, who also created the statues of the Shrine of Christ’s Passion.

The curved ramps flanking the stairs are not only for accessibility but also represent “arms of welcome for all who enter this sacred place.”

Russian artist Leonid Bodnia created the relief statues of St. Peter and St. Paul on the towers and like most of the art in the church, was created especially for this church. Inscribed into the doorpost are the Latin words, “ Ad Majoram Dei Gloriam” — “to the greater glory of God.” The guide explains that to glorify God is the reason parishioners sacrificed to build the $13 million church.

The three entrances to the church represent the Trinity; the 12 doors in the entrances represent the Apostles, whose translucent images are etched into the glass of the doors. The seven corporal works of mercy and the seven spiritual works of mercy are also etched into the glass by local artist Sharon Palazolo. The star cross, a predominant design of the old church has been incorporated into the design of the new church, starting with the star cross inlaid into the flooring in the narthex and continuing into the sanctuary in the stained glass window designs and in the almost 70 hand carved crosses, carved by a parishioner.

Once inside the sanctuary, all the liturgical symbols are in ascending order, starting with the Baptismal and Holy Water fount. The woodwork throughout the church was created by several parishioners. The octagonal shape of the Baptismal font is reminiscent of the old church’s back altar. The octagon shape representing the eighth day is also incorporated into the 80-foot soaring ceiling above the altar where it frames the stained glass image of the Holy Spirit — a copy of the Bernini window in the Vatican.

An impressive pipe organ is located behind the tabernacle. Circling the church are stained glass windows of saints, each with meaning to the parish and its parishioners. The parish received special permission to include St. John Paul II and Blessed Mother Teresa before they were canonized to represent contemporary witnesses of lives of holiness to which the parishioners hope to aspire.