Spreading the Gospel message in a changing world requires innovation and creativity. With increasing numbers of the population in the U.S. no longer claiming a religious denomination, ministries such as Redeemer Radio must seek new methods of reaching out to these people, especially the younger generations.

This year, Redeemer Radio began testing these new methods and will continue to institute changes in the new year. Cindy Black, executive director of Redeemer Radio, addressed some of those changes. 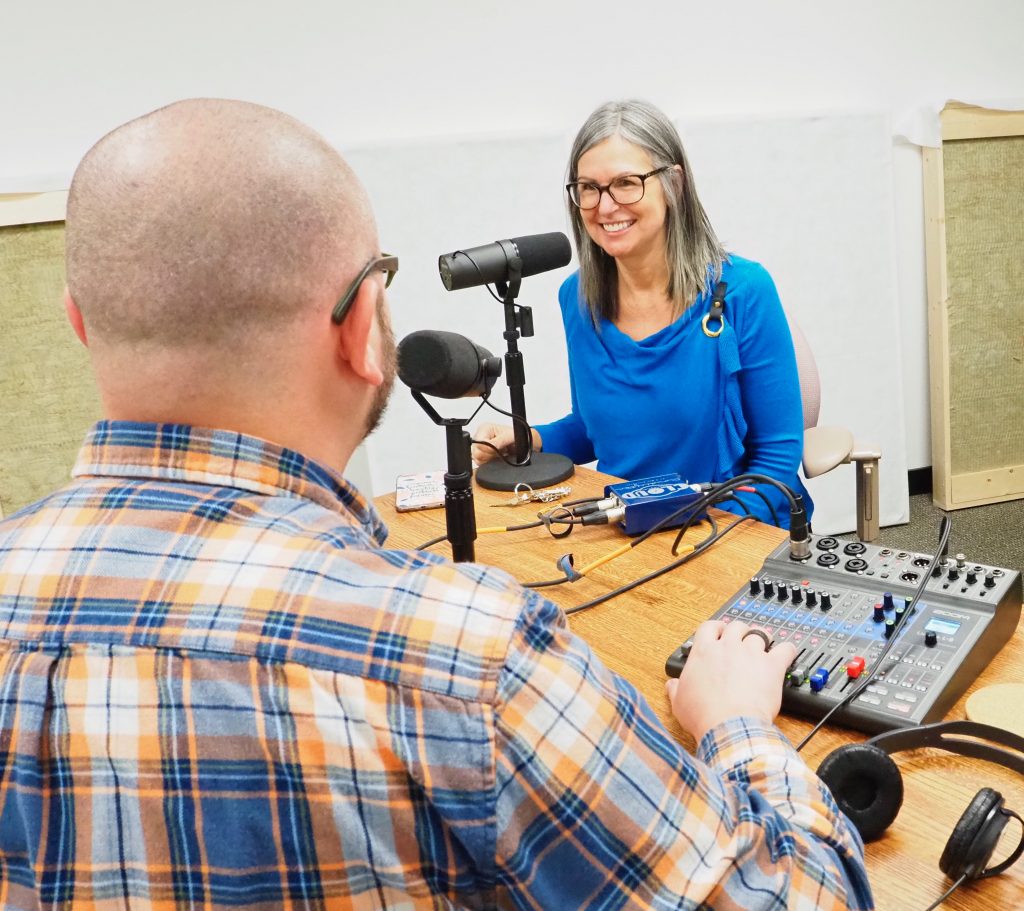 Photos by Jennifer Barton
Cindy Black, executive director of Redeemer Radio, and Steve Niemoeller, director of IT and platform partnerships, converse in the station’s newly renovated studio. The renovations are not the only change coming to Redeemer Radio: The station looks to change its programming lineup and format to reach a wider audience.

Black stated that in the past, the great need in Catholic radio was to teach apologetics so that the average Catholic could defend the faith against Protestant objections. That mission has morphed into finding a way for Catholics to share “with a secular world why we have hope, why we affirm the dignity of every human person, why we are involved in politics and issues of justice,” said Black.

She described what she called “the new apologetics” as demonstrating to young people who feel left out of the Church that they do belong to the family of God and His Church on earth; that Catholicism goes beyond a set of rules to knowing the love of Christ; and taking His love to others.

“We’re really hoping to help our listeners see what that looks like; that every person is on their unique journey to God. We want to journey with them wherever they are and accompany them, which is what Pope Francis has built his pontificate on. We want to accompany them along the way.”

To do this and to better utilize airtime and listeners’ support, Redeemer Radio plans to broadcast various podcasts in the morning, hoping to catch new listeners who are driving to work or school each day. To bring these podcasts to radio audiences the station will open up the 8 a.m.-1 p.m. time slot, melding podcasts of different lengths together to create a cohesive lineup that fits the allotted time frame.

The advantage of using podcasts over traditional radio programs is that podcasts are not limited to the hour or half-hour time frame to which live airtime restricts a show, which can either force a host to continue talking beyond what is necessary or cut time short even if a topic is not fully covered. In podcasts, only the amount of time needed to discuss the topic thoroughly is required, thereby shaving unnecessary filler while allowing enough time for a comprehensive conversation. 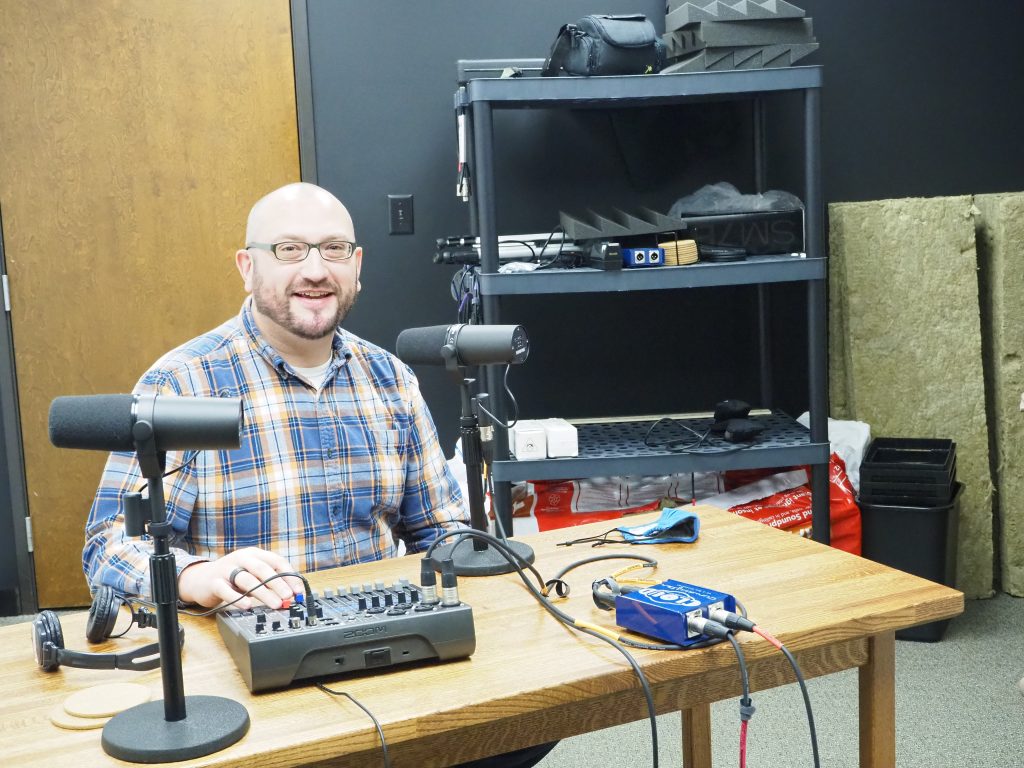 Podcasts attract listeners in the Millennial and Zoomer age bracket. Redeemer Radio hopes to reach out them through its new lineup of morning podcast blocks.

In a nutshell, “There’s a lot of really great content that isn’t making it to Catholic radio because of the time constraints that traditional radio has,” Black explained. “So many people are attracted to podcasts because you get the good content without all the extra stuff.”

Some of Redeemer Radio’s preferred podcasts are produced by Catholic News Agency, such as “CNA Newsroom” and “CNA Editor’s Desk.” These focus on current events and feature different guests and topics relevant to the season.

Many familiar programs will remain in the lineup, however, to help listeners deepen their faith life and learn more about the truths of Catholicism. “We are making sure there’s a balance of good instructional programming. We hear from both strong, faithful Catholic listeners and seekers that ‘Called to Communion’ and ‘Catholic Answers’ really do strengthen their faith but also answers those questions they have.”

Local programs listeners have become familiar with, such as “Truth in Charity with Bishop Rhoades” and “Doctor, Doctor,” will remain in the noontime position — though these could start a few minutes later on various days, depending on the run time of previous podcasts.

Redeemer Radio hopes to launch the new podcast blocks on Jan. 4. Black recommended that listeners “give it a bit of a chance; the Holy Spirit might be leading them in a way that they haven’t been led by other programming.”

Adjustments at the station have been underway since Kyle Heimann announced he was taking a leave of absence this summer to pursue a potential ministry for Catholic Creatives. Instead of “The Kyle Heimann Show” in the mornings, “The Daily Refill,” produced by Andrea Serrani, has been broadcast in that time slot.

“The Daily Refill” is a mix of local interest pieces blended with programs that target a broader audience, such as “The Messy Family Project,” with Mike and Alicia Hernon, covering topics on family life; and “Ask Christopher West,” which focuses on Theology of the Body questions. Serrani links common topics, keeping the day’s theme relevant to the time of year or current events to create an hour-long show. After an episode airs, she posts it to the Redeemer Radio website each day for those who want to go back and listen on their own time.

“That’s kind of a sample prototype of what’s to come in some of the other podcast blocks,” Black noted.

As for the question of Heimann’s return, Black was pleased to report that he is still a part of the Redeemer Radio ministry and currently produces seven podcasts a week.

In the future, Black hopes to see Redeemer Radio become a source for relevant, well-produced and, most importantly, faithful Catholic content even beyond the Diocese of Fort Wayne-South Bend.

“Redeemer Radio is expanding. God is calling us to try some different things with the radio towers, and we have a really engaged Catholic audience that give us feedback so we want to be able to test some of these shows and see what people want more of. But we also see ourselves growing.”

She expects the station’s own growth to encourage the spiritual growth of both Catholics and non-Catholics alike, helping them to “recognize that longing; that God-shaped hole in our hearts, which can only be filled through Him.”

“We want to bring to the radio stories of that self-reciprocal love that we all long for, in hopes that we all grow closer to Christ.”