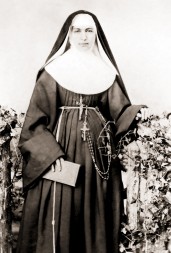 CNS photo/courtesy of the Sisters of St. Francis of the Neumann Communities
Mother Marianne Cope is pictured in a circa 1883 photograph. The teacher and hospital administrator spent more than three decades ministering to those with leprosy on the Hawaiian island of Molokai. She was canonized Oct. 21, 2012.

Following is the homily given by Bishop Rhoades at the January 23rd Mass for diocesan participants in the March for Life at the Basilica of the National Shrine of the Immaculate Conception in Washington, D.C.

It is wonderful to gather here in the Basilica of the National Shrine of the Immaculate Conception on this day after the national March for Life. I thank all of you who came to Washington to bear witness to the sanctity of human life, particularly my brothers and sisters from the Diocese of Fort Wayne-South Bend. One of our former bishops, Archbishop John Noll, was responsible for the raising of funds to build this beautiful National Shrine. And it is here in this house of Mary that we gather in prayer this morning, asking our Blessed Mother’s intercession for the cause of life, for an end to abortion, and for a new culture of life in our nation.

We just heard the Gospel of the appointment of the Twelve Apostles. Saint Mark tells us that Jesus “appointed Twelve, whom he also named Apostles, that they might be with him and he might send them forth to preach and to have authority to drive out demons.” Saint Mark then listed the names of the twelve apostles. I invite you to read that list and then add your name to the list. Why? Because this is our vocation too. Jesus has appointed you and me “to be with him” and He sends us forth to bear witness to Him in the world. Now it’s true that we do this according to our particular state-in-life vocations. A bishop is a successor of the apostles in the full sense of possessing apostolic authority. But in a more general sense, all the baptized are apostles. The name “apostle” means “one who is sent.”

Pope Francis has been emphasizing this mission of going out, going forth, into the world. The Holy Father is very critical of a self-referential Church, one that just looks at and serves itself. He is insistent in teaching us that the Church must go out, must be missionary, and he says that this is the task of every Christian, to be a missionary disciple. The Holy Father never tires of teaching us, and showing us by his example, that we must especially go out to those on the margins or peripheries of society: to the poor, the marginalized, the needy, the suffering, and the vulnerable. Regarding our care for the vulnerable, Pope Francis writes in Evangelii Gaudium: “Among the vulnerable for whom the Church wishes to care with particular love and concern are unborn children, the most defenseless and innocent among us. Nowadays efforts are made to deny them their human dignity and to do with them whatever one pleases, taking their lives and passing laws preventing anyone from standing in the way of this. Frequently, as a way of ridiculing the Church’s effort to defend their lives, attempts are made to present her position as ideological, obscurantist and conservative. Yet this defense of unborn life is closely linked to the defense of each and every other human right. It involves the conviction that a human being is always sacred and inviolable, in any situation and at every stage of development. Human beings are ends in themselves and never a means of resolving other problems.”

As we think about the vocation of the apostles and our vocation as missionary disciples, the Gospel we are to bring is the Gospel of life. There is no other Gospel. It is the Gospel of Jesus, the Gospel of love and grace. Pope Francis says: “Anyone who is Christian has a duty to bear witness to the Gospel: to protect life courageously and lovingly in all its phases.” Notice the adverbs: courageously and lovingly. Truth and charity! Never one without the other! We must reject “false compassion.” Pope Francis says: “The predominant school of thought sometimes leads to ‘false compassion’ which holds that it is a benefit to women to promote abortion; an act of dignity to perform euthanasia; a scientific breakthrough to ‘produce’ a child, considered as a right rather than a gift to be welcomed; or to using human lives as laboratory animals, allegedly in order to save others.” No, these are falsehoods. True compassion is rooted in the truth about the dignity of all human life. Fidelity to the Gospel calls us to love life always and in every stage and condition as a gift from God. Fidelity to the Gospel also calls us to show mercy and bring healing to women and men harmed by the wounds of an abortion.

Today we are celebrating the feast of a recently canonized American saint who was a heroic witness to the Gospel of life, Saint Marianne Cope. This religious superior of the Sisters of Saint Francis of Syracuse, New York, responded to a request to go to Hawaii to care for leprosy patients. She responded with enthusiasm and without fear. She and other sisters managed a hospital for lepers in Honolulu and also a home to care for the daughters of patients with leprosy. Later, when Father Damian of Molokai, the Apostle to Lepers, contracted the disease, Mother Marianne went to Molokai to care for him and other outcasts on the island. She continued Father Damien’s work on Molokai after he died, an incredibly difficult ministry. Mother Marianne served with serenity and trust in God and allayed the other sisters’ fear of catching leprosy. She was totally devoted to the lepers, seeing each of them as beloved children of God. She bore witness to the Gospel of life by serving Jesus in the person of the lepers. She put her own life and health at risk to live to the full God’s call to love the suffering and abandoned. She became their mother and has been called “the mother of lepers.” When he canonized her in 2012, Pope Benedict said: “At a time when little could be done for those suffering from this terrible disease, Marianne Cope showed the highest love, courage and enthusiasm. She is a shining and energetic example of the best of the tradition of Catholic nursing sisters and of the spirit of her beloved Saint Francis.”

I am glad that we’re celebrating the feast of Saint Marianne Cope today. Because what we need in our pro-life efforts is what Mother Marianne exemplified: love, courage, and enthusiasm. That’s what we need as missionary disciples, as apostles. May the Lord help us to serve the Gospel of life with love, courage, and enthusiasm! May the Blessed Virgin Mary and Saint Marianne Cope intercede for us!