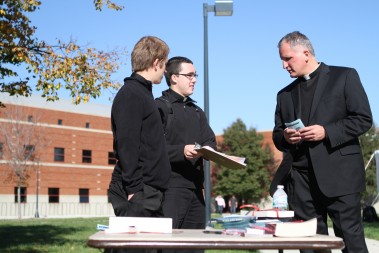 Seminarian David Huneck, who studying for the priesthood at Mount St. Mary’s Seminary in Emmitsburg, Md., is shown with the clipboard at a recent FOCUS mission at Ball State University. The missionaries do much of the follow-up work with the men and women who express interest in learning more about Catholicism. Pat Hake is on the left, and Father Brian Doerr of the Lafayette diocese is at the right.

MUNCIE — A group of seminarians got a head start on the Year of Faith with a mission trip to Ball State University this month. Thirty men traveled to the university campus in Muncie to put on a three-day outreach event Oct. 8-10.

The men, most of whom are studying at Mount St. Mary’s Seminary in Emmitsburg, Md., call themselves the New Evangelization Club. The trip was the fourth for the club, but the first time they traveled to Ball State.

“We chose Ball State for a few reasons,” said Stephen Duquaine, a seminarian from the Diocese of Lafayette who led the trip. “There are seminarians going to Mount St. Mary’s from dioceses nearby. We knew that seminarians would have an extra incentive to come on this trip if they knew they could make a trip home for a few days after the mission. We also thought about the great potential for conversions here. Our diocese is only 8 percent Catholic, so there are many people who need to hear about the truth of the Catholic faith. We also choose college campuses with FOCUS missionaries because they do much of the follow-up work with the men and women who express interest in learning more about Catholicism.”

FOCUS, or Fellowship of Catholic University Students, has four missionaries at Ball State.

The club is in its early stages, being only two years old. “The idea behind it is the call of Pope John Paul II and the Church for a rebirth of the New Evangelization; for Catholics to understand their faith and go out and spread the Gospel, because we live in a world now that is quickly losing that message and we need to bring that back,” said Jonathan Norton, a seminarian from the Diocese of Fort Wayne-South Bend.

Participating in the club is above and beyond what the seminarians do as part of their official formation. The group had training for four weeks prior to making the trip, where they covered how to share their personal testimony and how to engage strangers in conversation. It was Duquaine’s role to make sure the seminarians were prepared and ready for their mission. “In our culture today, the idea of talking to somebody about God is so foreign that seminarians are very apprehensive to do that,” said Duquaine. “One of my biggest jobs was convincing my brother seminarians that this is a worthy activity, sharing the Gospel message with others.”

The group arrived in Muncie with an agenda for their three-day trip. The schedule included Mass, Adoration, a Eucharistic Procession and two days evangelizing on campus. In addition, with the help of the Campus Ministry team at St. Francis, they hosted an event titled “Why Catholic.” The event, geared toward students, featured testimonies from Catholic students and an open forum where their peers could ask questions about the Catholic faith.

With Ball State’s permission, the seminarians set up a tent on a busy street corner and offered Adoration during the day. A sign, challenging passerby to “COME PRAY,” could be seen down the main thoroughfare of campus.

The seminarians worked in pairs when approaching students to engage them in conversation. A pair of seminarians was scheduled to pray at the Adoration tent every hour, with many students from the Newman Center stopping by in between classes to join them before the Blessed Sacrament. Many people walking by the tent were curious and stopped to ask what it was all about.

David Huneck, a seminarian from the Diocese of Fort Wayne-South Bend, had a unique experience from his fellow seminarians. As a former Ball State student, the trip was a homecoming of sorts. “It’s like a redemption, really,” said Huneck, who was involved in the Newman Center during his time at Ball State. “I hung out at the Newman Center and I felt comfortable there, so I didn’t really reach out to other people who needed to hear the Gospel. It’s like I’m getting a second chance now.”

The exercise was not without it’s challenges, though. For some of the seminarians, it was their first time participating in any kind of evangelization. “It’s humbling to approach someone and reveal to them the Gospel of Jesus Christ,” said Huneck. “It’s hard to do that in five minutes.” The men focused on a peaceful, loving approach to discussing their faith, which was well received by the students they talked to. As they stood next to the tent, the seminarians traded stories about conversations they’d had with students throughout the day. Almost all the stories were positive and encouraging.

One of the goals of the outreach was to get students who were interested in returning to the Catholic faith involved in the Newman Center. The seminarians collected names and contact info of interested students and at the end of the outreach, turned those contacts over to the FOCUS missionaries to follow up on. Huneck proudly shared his clipboard, where three students’ names and contact info were written. “Coming here and getting even one person who wants to come back to the Catholic Church makes the trip worth it,” Huneck said.