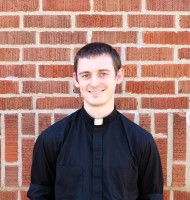 FORT WAYNE — Seminarian Zachary Barry will be ordained into the diaconate by Bishop Kevin C. Rhoades on Saturday, May 25, at 11 a.m. at the Cathedral of the Immaculate Conception in Fort Wayne. Barry has been preparing for that day, and ultimately ordination into the priesthood, since before high school.

A Fort Wayne native, Barry is the eldest son of Vincent and Rebecca Barry’s six children. The family belongs to Our Lady of Good Hope Parish in Fort Wayne.

Seminarian Barry is a graduate of Bishop Dwenger High School in Fort Wayne. He studied philosophy at Immaculate Heart of Mary Seminary in Winona, Minn., and theology at Mount Saint Mary’s Seminary in Emmitsburg, Md.

In an email interview with Today’s Catholic, Barry said he was led to the seminary because “Jesus drew me closer to Him so that I could begin to hear His will for me.”

He credits people that the Lord put in his path to help discern the vocation of the Priesthood.

“My middle school religion teacher (at St. Charles Borromeo School in Fort Wayne) suggested that we read a chapter of the Bible every day, which led me closer to God’s Word,” Barry said. “My mom suggested that we could ride our bikes to Mass during the week in the summer, which drew me closer to Christ’s intimate sacrifice. And during high school my participation in Bishop Dwenger’s ‘A Chance To Serve’ ministry and in my parish youth group led me deeper in prayer and discernment.”

Barry told Today’s Catholic he believes every Catholic young man should consider the Priesthood as a possible vocation.

“All young people, and all Catholics not already committed to a vocational way of life, should ask the Lord in prayer to reveal His plan for their life,” Barry said. “In His own time He will reveal to us the deepest desire of our hearts and will give us the graces we need to follow Him to a truly fulfilling happiness in following His will.”

Barry said it has become clear to him, especially in the past several years in the seminary, that the Lord is calling him to be a priest.

“The best thing about being in a parish over the summer was praying with the people,” Barry said. “There is something powerful in the simple action of joining together in the prayer of the Eucharist.”

“The time I spent in parishes over the summer serving at Mass, drawing close to the Lord in His sacrifice and therein discovering a greater love for the people, was crucial for my discernment,” he added. “The shared prayer of the Mass in a parish brought home to me the deep desire I had to spend my life serving the people of this diocese.”

Barry said, “The wisdom and example of leadership and prayer in the priests with whom I stayed was also very beneficial and I am grateful for the time they took to mentor me as a seminarian. Seeing their great joy in being a priest of Jesus Christ was a true gift and an encouragement to me.”

“What I have learned about the Priesthood both in the classroom and in pastoral experiences, and my own prayer about this vocation has all contributed to my vocational discernment,” Barry said, “but it isn’t something that I came to know on my own. My spiritual director in the seminary helped me to understand through my years of formation how God is at work in my own heart and life, and the formation team at the seminary has offered their confirmation of my vocation. Ultimately, I have found the greatest peace here in following the Lord’s call, which has come to me through His Church.”

On the call to priestly vocations, Barry said he notices there are more young men coming forward to enter seminary and discern their possible call to the priesthood.

“I attribute this to a greater awareness to the Lord in their lives,” Barry said. “This kind of increase in vocations comes from better catechesis, prayer as Jesus recommends in Matthew 9:38, fostering vocational discernment among Catholic youth, and from the witness of holy, faithful, joyful priests.”

“As seminarians,” he added, “we recognize the need for greater evangelization and discipleship, which will draw us closer to the heart of Jesus Christ, the source of all true vocations.”

He encourages the faithful to “pray for vocations, that the Lord will find a way into the hearts of our young people today, and that they will respond courageously to Christ’s call to witness to the faith out of love in whatever way He calls them to do so.”

Of the upcoming diaconate ordination and year serving as a deacon in the Church, Barry said, “I am humbled by the responsibility to be entrusted to me and excited to continue following the Lord, drawing others to Him. It will be a great joy as a deacon to assist at the altar of His sacrifice.”

“Vince and I are honored and blessed to have been trusted by God to raise up a potential priest to serve the Church we love,” said Becky Barry, Zak’s mother. “Every child is created with special gifts, to be used for their own salvation and that of others. It has long seemed that Zak’s unique vocation was that of a priest.”

“It is with great joy, and also some fear and trembling, that we see this coming to fruition as we anticipate his ordination to the diaconate,” she added. “Zak is very delighted, peaceful and enthusiastic in accepting this path God has offered him. We are thrilled, because we want our children to be eternally happy.”