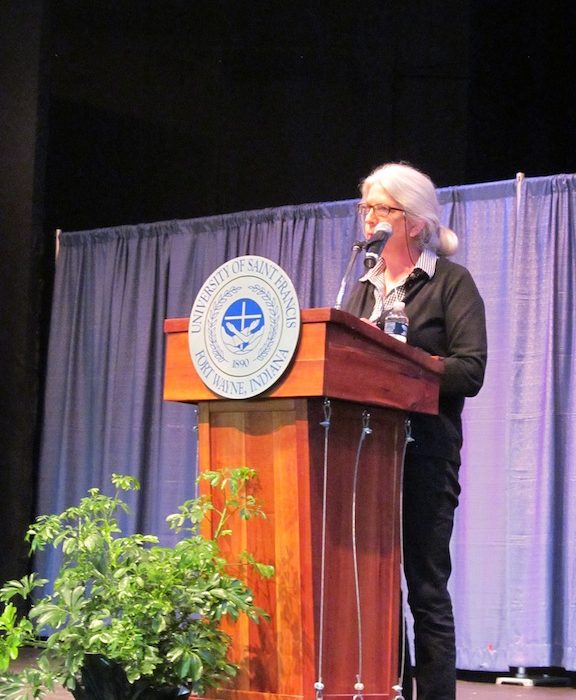 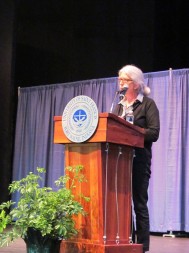 Martha Hennessy, Dorothy Day’s granddaughter, gives a plenary session talk at the University of Saint Francis on May 14.

FORT WAYNE — A daughter of the Church. A saint for our time. A counter-cultural saint. The face of Catholic social justice. An icon of mercy. These were just a few of the ways that Dorothy Day was described at the recent conference “Dorothy Day and the Church: Past, Present and Future” offered by the University of Saint Francis May 13-15 in Fort Wayne and co-sponsored by Our Sunday Visitor.

There were four plenary session talks given by Brandon Vogt, Robert Ellsberg and Kathryn Jean Lopez, writers and editors who have studied Dorothy Day. An additional plenary talk was given by Martha Hennessy, the granddaughter of Dorothy Day. Forty papers were presented in break-out sessions by university professors and scholars who have studied Dorothy Day and the Catholic Worker movement, as well as talks given by Catholic Workers, themselves deeply involved in the work of Catholic Worker houses and farms. There were approximately 120 attendees at the conference.

Writer and editor Robert Ellsberg was another of the conference plenary session speakers. He worked at the New York Catholic Worker house from 1975 to 1980 and worked closely with Dorothy Day. Ellsberg’s career has been deeply influenced by Dorothy Day, as he has edited her writings and letters.

Ellsberg spoke of Dorothy Day praying at the Basilica of the Immaculate Conception in Washington, D.C. in 1932. Her prayer was that God help her to use her talents to alleviate the sufferings of the poor. She returned to her New York apartment to find Peter Maurin, a French intellectual who gave her a Catholic framework for the Catholic Worker movement.

Dorothy Day was a pacifist during World War II and the Vietnam War, which caused scandal for her. She and her fellow Catholic Workers protested against institutions they believed contributed to poverty. In the 1970s, Dorothy Day protested on behalf of Cesar Chavez and the California farm workers, for which she was arrested and jailed.

The Incarnation of Jesus Christ was pivotal for Dorothy Day, said Ellsberg. He quoted her writing: “The mystery of the poor is Jesus. What we do for them, we do for Jesus.” As her vocation to work for the poor became clearer and more defined with the Houses of Hospitality, sacrifices followed. Dorothy Day experienced some of the dark night of the soul of St. John of the Cross. She felt at times that she deeply let her fellow Catholic Workers down when she had been brusque to them or refused their requests.

Still, her abiding love for the poor carried her through: “Where there is no love, put love, and there will be love.” Ultimately, Ellsberg believes that Dorothy Day’s example of holiness is not just for the few or only for Catholic Workers, but that her call to holiness is for everyone.

Kathryn Jean Lopez was another plenary session speaker and the editor-at-large for the National Review Online. “I’m a fellow New Yorker who loves Dorothy Day and is inspired by her witness,” she said.

Lopez sees a strong connection between Dorothy Day and Pope Francis, and a Church that reaches out to the marginalized. Lopez is impressed with Dorothy Day’s hospitality in the Catholic Worker houses: “Give them good coffee, and they may stay for the Gospel,” she said.

Before Dorothy Day’s conversion to the Catholic Church in 1927, she had an abortion, the result of an unhappy love affair with Lionel Moise, an older man strongly opposed to marriage and children. When he learned that Dorothy Day was pregnant with his child, he pressured her to get an abortion and told her he was leaving the country and her. The abortion would haunt Dorothy Day the rest of her life. Dorothy Day was wounded by her abortion, Lopez said, but after her conversion to the Catholic Church, she found consolation about her abortion in the confessional and clung to the mercy of Jesus Christ. “What an icon of mercy she is,” said Lopez. “So many woman have been wounded by abortion and don’t know that they can be forgiven in Confession.”

“Dorothy Day is a holy woman who has been gifted to us,” said Lopez. “We need to let the fullness of Dorothy Day’s life be known.” She believes that Dorothy Day belongs in a litany of saints of the Americas.

Martha Hennessy, another of the plenary session speakers, is Dorothy Day’s granddaughter. She remembers Dorothy Day — she called her “Granny” — as serious but also warm. Dorothy Day would travel to the farm where her only child Tamar lived with her husband and nine children. Martha married and raised her family and returned to the Catholic Church in 2004. Her work at Maryhouse, the Catholic Worker house in New York, has deeply affected her. The simple act of cooking soup and handing it out to poor people, she said, is such a simple act that helps the poor, “but really, it changes ourselves.”

Lance Richey is the Dean of the School of Liberal Arts and Sciences at the University of Saint Francis and one of the conference organizers. “Dorothy Day is really a model for everyone who wants to embrace what is best about America, while at the same time critiquing our culture in light of the Gospel demands of voluntary poverty and non-violence,” Richey said. “She defied our usual political categories, and tried to define her life solely in terms of the Gospel. At a time when the Church in our country is divided between left and right, Republican and Democrat, liberal and conservative, she showed a way to follow Jesus, which transcended these categories.”

Richey said Dorothy Day “called us to a radical discipleship which embodied the fullness of our Catholic faith. Our conference was an attempt to let her example point the Church in America towards a more faithful and vibrant future.”