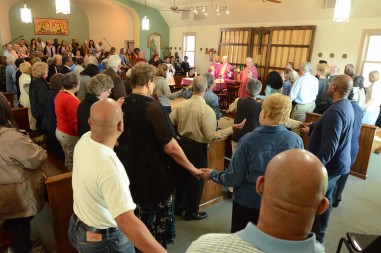 Bishop Kevin C. Rhoades celebrates the Vigil Mass that closes the Sankofa Day of Reflection held at St. Augustine Church in South Bend on March 14. Bishop Rhoades spoke of the Strategic Plan for the Evangelization and Pastoral Care of Blacks in the diocese.

SOUTH BEND — Inspired with the “audacity to look back at history and the prudence to look forward” to the future, the diocesan Black Catholic Advisory Board hosted “Sankofa — A Day of Reflection” at St. Augustine Parish in South Bend on March 14. A West African word meaning, “go back and fetch,” Sankofa led members of the Diocese of Fort Wayne-South Bend to remember with pride and admiration the past achievements of African American Catholics in U.S. history while considering the sobering realities of current racial tensions both within the Catholic Church as well as in society at large.

Keynote speaker, Vince Guider, of Old St. Patrick Church in Chicago, commiserated with the multiracial audience of laity, religious, educators and community organizers as they paused to consider the chants of racist slurs on the lips of University of Oklahoma college students, the violence in Ferguson, the multiple shootings of young African American men by law enforcement officials these past few months — all ironically while marking the 50th anniversary of the Civil Rights Movement in Selma, Alabama. This is the type of “fearless and bold looking” that is called for by Sankofa.

The director of community development for the North Lawndale Kinship Initiative, Guider explained how his church in Chicago has implemented a collaborative partnership founded on “asset based community development.” For the last 30 years, their initiative has chosen to focus, not on what is missing, but rather, what are clearly gifts within the communities they seek to serve. “So we can enrich each other,” he explained. “This is not a charity model, but a justice model.”

He added, “We all deserve opportunity. This allows for reciprocity. Blessings flow from all directions and cross-pollinate. This is what Church must do for all its people.”

As Pope Francis has called all to an encounter with all, Guider finished his talk with the same emphasis of the New Evangelization. “We used to wonder, ‘How can we get people to come to church?’ Now we have to realize this is the time we need to find a way to have the church come to the people.”

Igniting further pride of cultural expression and heritage, members of the Indiana University-South Bend African Dance and Drum Club entered to the song, “Siya Hamba” (“We are Marching in the Light of God”) sung intermittently in Zulu and English. Dancing, at once, in practiced unison with the troupe and then each, individually, in open and ardent abandonment, white dresses billowing and swaying like the wings of a dove, the celebration of God and Spirit in song and dance left all who watched, with excitement and joy, affirmed in the belief that “we are on holy ground.”

Breakout sessions allowed for small group discussions on how to implement the Strategic Plan for the Evangelization and Pastoral Care of Blacks in the Diocese. The four categories surrounding the key “Call of Evangelization” included education, history, pastoral care and vocations. A concluding discussion allowed for each group to report back their thoughts and findings prior to the celebration of the Sunday Vigil mass.

Wearing the rose-colored vestments of Laetare Sunday, Bishop Kevin C. Rhoades spoke to the St. Augustine congregation on how fitting it was to be with his African American congregants on this special day of rejoicing within the 40 days of Lent. The jubilant sound of tambourines and drums, soulful piano and a yearning electric guitar swelled under the choral harmonies of visiting Indianapolis Holy Angels Parish Gospel Choir whose joyous songs of praise evoked shouts of gladness, clapping, dancing and appeals of “Hallelujah” throughout the nearly two-hour liturgical celebration.

As he gathered the nine members of the Black Catholic Advisory Board around the altar for the Promulgation of the Strategic Plan for the Evangelization and Pastoral Care of Blacks in the Diocese of Fort Wayne-South Bend, Bishop Rhoades commended them for such fruitful labors since their formation two years ago. Looking back with them to the transformative moments they shared at the National Black Catholic Congress in 2012, he pledged his company on the shared journey toward the future.

Deacon Mel Tardy’s acknowledgement of the strategic plan includes a prayer that those who become aware of this “will be moved in heart to help implement (it); to somehow affirm, inspire and otherwise serve the oft-forgotten descendants of Africa in our diocese and the cause of interracial harmony. Even angels will rejoice because of you.” His prayer was magnificently underscored by the first reading of the Mass celebrated for the plan’s promulgation:

All the kingdoms of the earth

the LORD, the God of heaven, has given to me,

and He has also charged me to build Him a house …

whoever, therefore, among you belongs to any part of His people,

To read the plan in its entirety, as well as to contact members of the Black Catholic Advisory Board, visit http://www.diocesefwsb.org/Diocesan-Black-Catholic-Ministry.