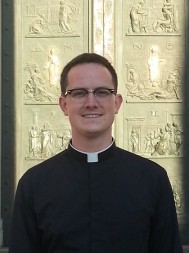 Royce Gregerson stands at the Basilica of St. Paul Outside the Walls in Rome.

ROME — For seminarian Royce Gregerson, preparing for his Oct. 2 ordination to the diaconate has been a journey of prayer and mediation. “I have been spending time in prayer meditating on the promises that I will make and the words of the Rite of Ordination, and focusing on how I can better live as a Christ-like servant,” he says.

A native of Marion, Gregerson is one of Roy and Karen Gregerson’s three children. After attending Catholic elementary school in Marion he transferred to St. Joseph-St. Elizabeth Ann Seton School in 2000 for his eighth-grade year when he and his family moved to Fort Wayne. Gregerson graduated from Bishop Luers High School in 2005 and Wabash College in 2009. He and his family are active members of St. Elizabeth Ann Seton Parish in Fort Wayne.

Crediting his family, his Catholic education and the joy and guidance of many faithful priests in his life, Gregerson says God used life’s circumstances to grow his faith at every point in his life. “My parents taught us the faith and gave us a good example of what it meant to be faithful Catholics,” he says, adding that receiving a Catholic education and being surrounded by other Catholics, including inspiring and helpful priests like Father Duane Craycraft and Father Jim Shafer, added to the strong faith foundation that now undergirds his vocation.

Though the young seminarian admits that from an early age he knew that he was being called to the Priesthood, Gregerson says, he did his best to ignore it through high school until he found great fulfillment in serving others while on a service trip. His parents were not surprised when he divulged his discernment to the Priesthood and shortly after he began meeting regularly with his pastor, Father Shafer, until his entry into seminary in 2011.

Seminary life has been inspirational to Gregerson, who holds a bachelor’s degree in philosophy from Pontifical College Josephinum and a Bachelor of Sacred Theology (S.T.B.) from Pontifical University of the Holy Cross.

“Life in the seminary has been a tremendous blessing for me. The opportunity to live and study with so many other men who are in love with Christ and desire to serve God and His Church, open to His will for their lives is an unrepeatable experience,” says Gregerson.

Currently, he resides at the Pontifical North American College in Rome where he has begun studies for a Licentiate of Sacred Theology (S.T.L.) with a concentration in moral theology at the Pontifical University of St. Thomas Aquinas. He expects to complete his studies in 2016.

Gregerson recalls the impact his summer assignments at St. Thomas the Apostle, Elkhart, St. Vincent de Paul, Fort Wayne, St. Mary of the Assumption, Decatur, and St. Vincent de Paul in Elkhart have had on his vocation. “Probably the most important part of my summer assignments has been an increase in desire to serve as a parish priest,” he says, adding, “The biggest blessing for me, though, from these assignments has always been a steady confirmation of my vocation.”

Being stationed in Rome for the past three years in close proximity to the Holy Father, Gregerson has developed a new and deeper devotion and appreciation for Pope Francis and the workings of the Catholic Church. He feels his world-class education there has been priceless. “There is an academically charged environment in Rome and I’ve been exposed to so many people who have pushed me to learn more, think more critically, and to appreciate the truly vast treasure that exists in sacred theology,” he says, adding that the cultural experience in Rome has broadened his understanding of the Church in America and abroad.

The Oct. 2 diaconate ordination took place in Rome in the Papal Basilica of St. Peter at the Altar of the Chair. “To be ordained at the heart of the Catholic Church, over the site of the martyrdom and tomb of the Prince of the Apostles, is unique and something I will treasure for the rest of my life,” says Gregerson excitedly. Many of his family members traveled to attend the sacred Mass while others at home were offering prayer support.

Gregerson’s focus has been on his prayer life and service to God. “I have been trying not to focus too much on the ordination itself and trying to just remain faithful to my daily habits of prayer in the Mass, the Divine Office, the rosary and my meditation each day,” he says. This inspired young seminarian feels he offers a readiness and willingness to serve the Lord and His Church. “After five years of priestly formation my heart has been conformed more and more to Christ’s and I am ready to offer my life to Him through the promises I will make at my ordination. That willingness and readiness to sacrifice oneself strikes me as the most important thing, more so than any skills or talents I might have,” he says.

His hope during his year as deacon: “I hope that I learn as deacon how better to be a servant for my fellow Christians in imitation of Christ. This year will also be focused in large part on preparing for Priesthood, so I’m really looking forward to learning how to celebrate the sacraments, especially Holy Mass. Within the diaconate itself, I look forward to serving as a deacon during Holy Week, especially the Paschal Vigil.”